The architecture and interior design company has restyled the hall of the 19th-century Grand Hotel et de Milan location.

MILAN — The Leopard’s saying “for things to remain the same, everything must change” might have been originally intended to address a political situation but it can find its validation in other fields, too.

In the world of hospitality, being a renowned, storied hotel comes with a certain charm, a rich background of fancy anecdotes by likewise fancy guests and a loyal crowd of aficionados that consider the space as a second home. All good reasons that would discourage any change in the winning formula.

Yet the prestigious, 19th-century Grand Hotel et de Milan hotel tapped Dimore Studio to refresh the image of its hall and historic Gerry’s bar. Opened in 1863, the hotel has been a favorite of personalities of the opera, fashion, movie and music industries for years, also favored by its strategic position in the heart of the city, few steps away from Teatro alla Scala and facing Via Montenapoleone.

Dimore Studio’s founders Britt Moran and Emiliano Salci elegantly infused their signature eclectic taste in the space trading the former color palette of orange and taupe shades with touches of pink and mauve and contrasts of rust, burgundy and forest green hues. 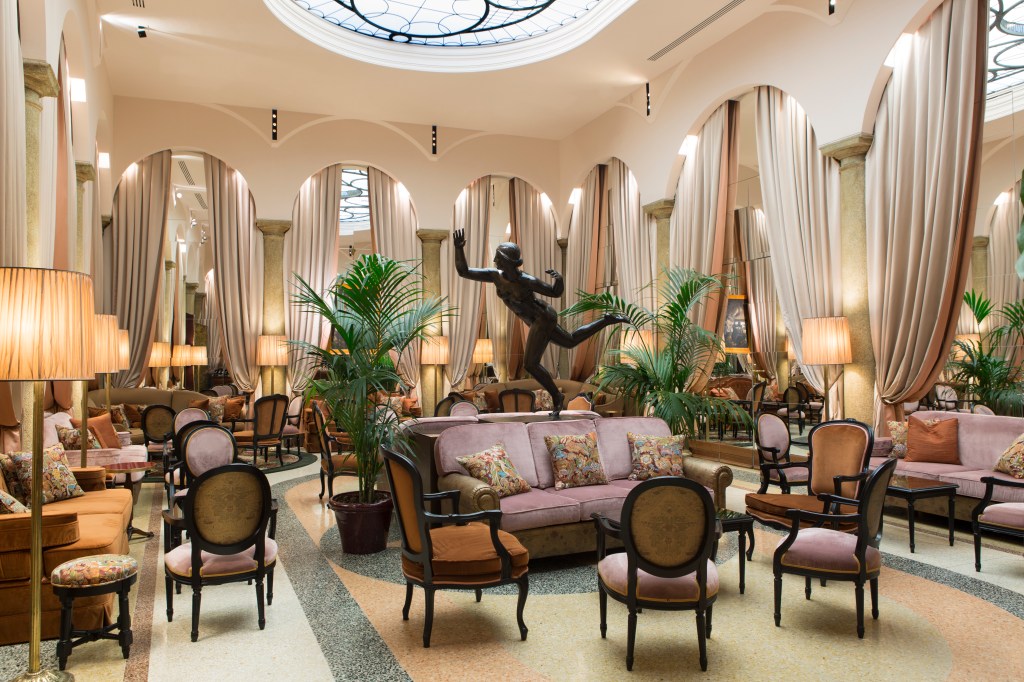 Respecting the essence of the spaces and the historical pieces featured into them, the design studio relied on velvety fabrics, silks and jacquards to enhance the hotel’s rich marble surfaces, its works of art, the 19th- century fireplace and colored terrazzo flooring.

Embroideries, floral patterns on smooth fabrics adorning the hall’s sofas and liberty motifs bedecking the cushions and stools of the bar area have also been introduced to inject new life in the location. Fringes embellishments on furniture pieces and newly added pastel-colored lampshades in pleated raw silk deliver a retro vibe with sophistication. 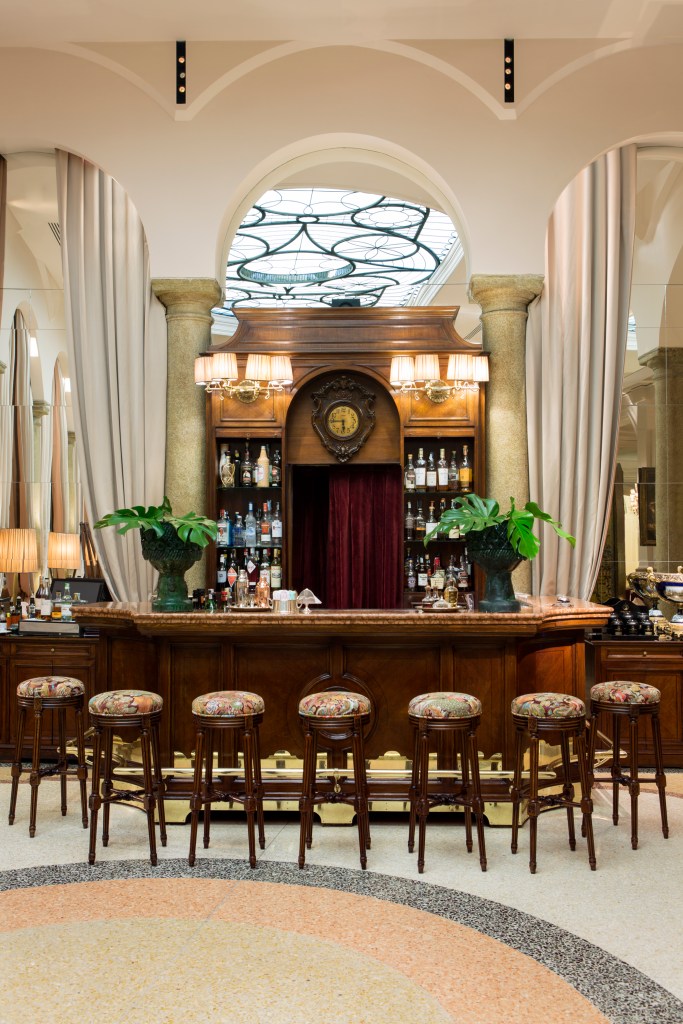 Founded in 2003, Dimore Studio consolidated its position as a go-to interior design firm for companies operating in the fashion and beauty industry thanks to its recognizable, chic taste for warm and cozy décor, color juxtaposition, a special use of light and a blend of retro elements with contemporary twists.

The firm has worked with the likes of Fendi on several boutiques and the luxurious Palazzo Privé VIP apartment in Rome; Dsquared2, decorating the high-end Ceresio 7 bar and restaurant and designers Dean and Dan Caten’s London town house; Dior on its Saint Tropez boutique and Boglioli for the brand’s New York unit; Pomellato and Aesop for their stores in Milan, as well as conceiving the interior concept of the Lagrange12 multibrand fashion shop in Turin and One-Off in Brescia, among others. After designing the jewel Leo’s at The Arts Club in London, Dimore Studio is said to be working on The Arts Club in Dubai, expected to open next year.

In 2014, the founders further indulged in their passion for historical and vintage pieces launching retailer Dimore Gallery, which sells pieces by names such as Giò Ponti, Piero Portaluppi and Gabriella Crespi. In addition, the venue — located in Milan’s arty Brera district — also carries some selected pieces of furniture by Dimore Studio.

As reported, earlier this year Moran and Salci also debuted the Dimore Milano label to expand their reach in the production of larger furniture pieces and the introduction of a fabric collection and home objects. 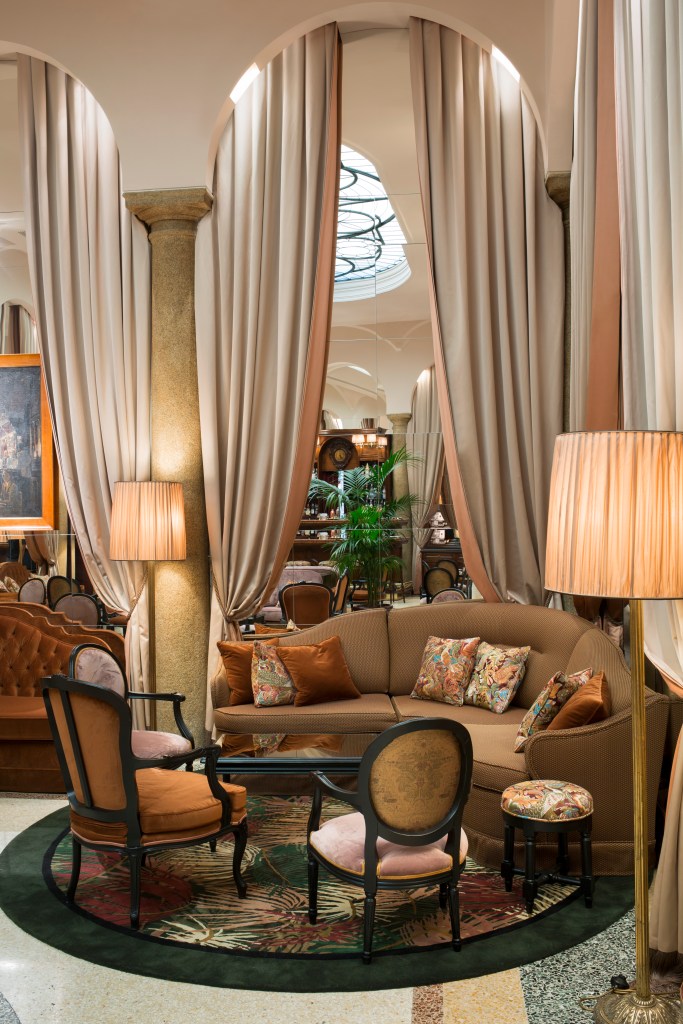 The Grand Hotel et de Milan’s prestigious history started at the end of the 19th century as the hotel acquired significant importance for being the only one in the city furnished with postal and telegraph services, leading diplomats and businessmen to its spaces. Prominent cultural personalities followed: The most illustrious of these was Italian opera composer Giuseppe Verdi, who intermittently stayed there from 1872 to his death in 1901, working on operas as “Othello” and then “Falstaff” in the process and to whose memory a plaque has been added in the hotel. Other key guests included painter Tamara de Lempicka, writers Gabriele D’Annunzio and Ernest Hemingway, actors Richard Burton, Vittorio De Sica and Marcello Mastroianni, as well as Maria Callas, who was said to argue with her first husband for hours at the reception in front of their open security box over the choice of the jewels to wear.

At the beginning of the Seventies, in sync with the boom of the Italian “pret à porter,” the hotel opened officially to the fashion world with Gianfranco Ferrè and his business partner Franco Mattioli staging their first show there. Ever since, the hotel provides a set for photo shootings and fashion presentations, as well as a networking destination among photographers, models and designers.