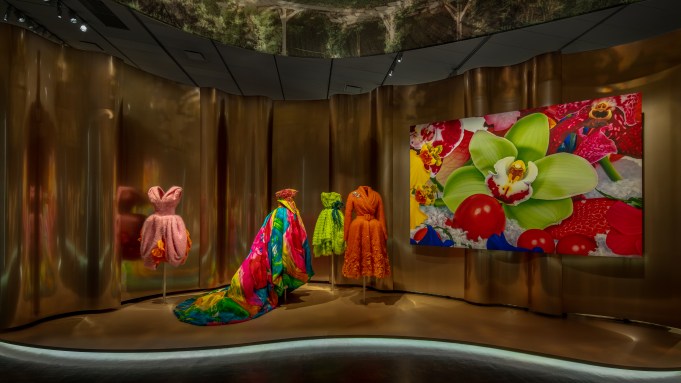 DENVER — The first retrospective of Dior in the U.S. has landed at the Denver Art Museum — and though the exhibition is a continuation of the 70th-anniversary display that bowed in Paris in 2017, “Christian Dior, Couturier du Rêve,” the DAM show offers an entirely new look at the legacy of the house, and its relationship to the world.

The exhibition, which opens to the public on Nov, 19, is roughly two-thirds new, with much of it never before exhibited. It is comprised of 202 looks, with eight pieces from the collection of Hamish Bowles, several from the Henry Ford Museum, while the majority come from the house of Christian Dior.

“The first project was to bring the Paris exhibition here, like a tour,” says Florence Müller, who curated the exhibition (she co-curated the Parisian show with Olivier Gabet, museum director at Les Arts Décoratifs). “But soon after the opening it was very clear that it was such a huge success in Paris that I was thinking, ‘perhaps nobody will come [in Denver], because if you take the same exhibition, what is the new vision?’ Then very soon this idea came to reinvent, reshape the exhibition, remodel the content.”

Müller relocated from France to Denver in 2015, when she was named the Avenir Foundation Curator of Textile Art, Curator of Fashion at DAM. Her previous work with the museum included curating the 2012 “Yves Saint Laurent: The Retrospective” exhibition, which showed exclusively in the U.S. at DAM. She has curated 15 exhibitions on Dior, include the “Esprit Dior” Seoul show in 2015.

The exhibition finds its home in Denver mostly in part due to Müller’s relocation to the museum.

“I was tempted by a new thing in my life — something very different, with no connection to Paris,” she says of her move.

She spent the last year and a half traveling to Paris to visit the archive of Christian Dior, where she sourced designs from each of Dior’s seven creative directors. After the founder came Yves Saint Laurent, Marc Bohan, Gianfranco Ferré, John Galliano, Raf Simons and now Maria Grazia Chiuri.

The exhibition is designed for the Denver Art Museum by Shohei Shigematsu at OMA Partners, whose fashion exhibition credentials include Prada’s “Waist Down” exhibition in 2006, and the 2016 “Manus X Machina: Fashion in an Age of Technology” exhibition at the Costume Institute at the Met Museum.

Müller was drawn to Shigematsu precisely because he hasn’t done many fashion exhibitions.

Shigematsu says he approaches designing an exhibition as “reacting to the given architecture and the space, and to try and create an immersive environment that not necessarily overwhelms the garments, but creates a space for exhibition.” He wants the clothes to take center stage. “My personal criticism of fashion exhibitions is that they tend to use too many additional displays and explanations,” he adds. “That, for me, often takes my attention away from the garments themselves.”

His challenge with the Dior exhibition was translating the collection from its very ornate, classical architectural surroundings in Paris to the modern, angular construction of DAM.

“One analysis we have after visiting this show in Paris, where it was hugely successful, was its home of Dior, and in very extravagant palacelike rooms, and all these kind of gorgeous displays. We thought it was quite naturally matching, this kind of fine detail, fine environment, luxurious couture. Of course it makes sense. It’s about the brand,” he says. “But we thought we could modify this exhibition to slightly more a contemporary neutral so that people can refocus to the garment, and are not too preoccupied by the conceived notion of the brand.”

The exhibition spans two galleries at the museum. Shigematsu has constructed curved sequences of rooms, mean to evoke Dior’s “feminine curves,” he says, as well as an “organic garden setting” inspired by Mr. Dior’s garden at his home in Granville.

“We fought with these two inspirations. We thought it would be nice to have these kind of cell-like rooms that define each theme, that are kind of linked together. Showing someone the tension through this very edgy architecture,” Shigematsu says. “Masculine architecture here, more feminine rooms that is more enhancing to the garments inside.”

“There are really beautiful pictures of those early days of the fashion shows,” Shigematsu says. “So we superimposed very classical stairs through this contemporary outlet.”

The exhibition breaks from the Paris display and is divided up by creative director, with rooms in between focusing on topics like the influence of gardens through the history of the brand and iconic gowns worn by celebrities and socialites.

The first room shows a series of black-and-white looks from all seven creative directors, displaying their individual translation of Mr. Dior’s first collection, the “New Look.” Between each designer’s section, there is also a room dedicated to iconic moments of Dior in photography, featuring works from Richard Avedon to Irving Penn and Cecil Beaton.

In a room dedicated to the celebrity world of Dior, famous gowns worn by women throughout the years are displayed alongside a video installation, including gowns worn by Lee Radziwill, Deeda Blair, Betsy Bloomingdale, Princess Grace of Monaco and, more recently, the gown Jennifer Lawrence famously tripped in while accepting her Oscar and a handful of dresses from 2017, including Rihanna at the Cannes Film Festival, Charlize Theron at the Oscars and Zoe Kravitz at the Emmys.

The first gallery concludes with mood boards of Chiuri’s spring 2018 couture collection, meant to show the extent of a designer’s creative process. “It’s to explain to people who don’t know much about fashion that the process of creating a fashion collection is a journey of all sorts of images and ideas put together,” Müller says.

That said, she predicts the DAM exhibition will draw a similar breakdown of fashion expert and newbies alike, despite the fact that Denver is not particularly known as a fashion hub.

The hall that connects the two wings displays never-before-shown scarves from the Dior archive, before visitors arrive in the final room, which embodies the exhibition’s title.

“This is exactly the title of the exhibition — this is from Paris to the world,” Müller says in the room. Dresses from each seven designers from collections inspired by global destinations, many from Paris and then looks referencing Africa, the Middle East, Asia and, yes, the U.S.

‘Dior: From Paris to the World’ is open at the Denver Art Museum from Nov. 19, to March 3.

Soundcheck With Anna of the North