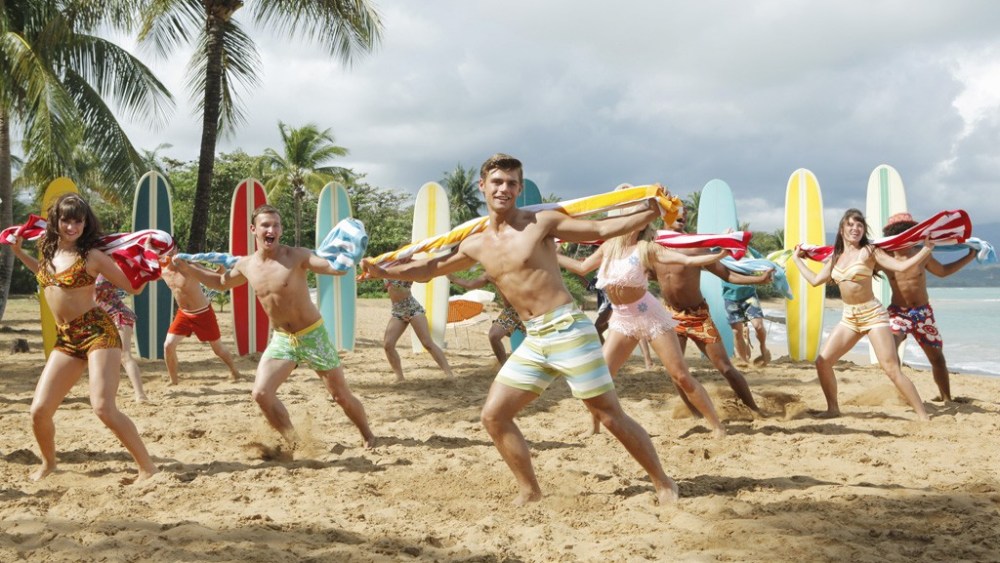 With Zac Efron recently lusting after Nicole Kidman in “The Paperboy” and Vanessa Hudgens engaging in threesomes in “Spring Breakers,” the “High School Musical” era at Disney Channel is definitively over. Ready to fill that vacuum of squeaky-clean fun — and potentially set to become another lucrative franchise — comes “Teen Beach Movie,” a retro musical for the teenybopper set that premieres on the cable channel today.

Staged in a movie-within-a-movie — the plot has contemporary teens McKenzie (played by Maia Mitchell) and Brady (Ross Lynch) transported into “Wet Side Story,” a Sixties beach party flick — the light-hearted romp has plenty of energetic musical numbers and spirited Kennedy-era costumes. “Teen Beach Movie” is a central tentpole of the Disney Channel’s summer schedule and a promotional tour has hopscotched its way around 10 cities at Simon Malls leading up to the film’s debut. A broadside of licensed product in apparel, home décor, fashion dolls, bedding, lunch kits and school supplies is now hitting Wal-Mart, Target, Toys ‘R’ Us, Kohl’s, Kmart and Disney stores.

To capture the breezy, up-tempo look of the musical, Disney turned to a perhaps unlikely choice of costume designer in Ruth Carter, who has tended to work on more serious fare such as “Amistad” and “Malcolm X,” which both earned her Oscar nominations. She has a long history of working with African-American film directors, particularly Spike Lee, with whom she designed costumes for “School Daze,” “Jungle Fever” and “Crooklyn,” as well as the upcoming “Oldboy,” a remake of the dark, South Korean thriller.

“This was so out of the box for me. It was a breath of fresh air,” said Carter of her entrée to Disney tween-dom. “I don’t want to be stereotyped. I can go from Spike Lee to this.”

Carter drew from an extensive personal library of books on Sixties dress and a collection of Look, Glamour and Ebony magazines from the era. Her bible, however, was a stash of old Sears catalogues that helped her perfect her ensembles of petal pushers, gingham shirts and pointy-toed flats.

“Those catalogues were the wish books of their time. They were an idealized vision of life. It fit perfectly for this movie — which is kids on a beach whose hair never gets messed up,” said Carter.

With a nod to classics like “West Side Story” and “Grease” — minus any heavy themes like teen pregnancy or socioeconomic stratification — “Teen Beach Movie” is framed by a surfers-versus-bikers story line, with Garrett Clayton playing the heartthrob surfer, Tanner, and Grace Phipps as the cute biker babe, Lela.

To bring authenticity to the costumes, Carter rented period pieces from Los Angeles vintage resources like The Way We Wore and Palace Costume. She supplemented with brands like Abercrombie & Fitch for horizontal striped T-shirts, Keds for tennis shoes, J. Crew for capri pants and Levi’s for cut-offs. “Everyone wore Levi’s back then, but we used the new ones with stretch, so the dancers could move. I don’t know how James Dean or Elvis did it without stretch,” said Carter.

To boost the film’s fashion appeal, Disney tapped stylists Louise Roe and Daniel Musto to helm a photo shoot with the film’s leads in retro-inspired outfits from current brands like Forever 21, Zara and Topshop.

“It’s a really cute, fun movie and we got to play with two very different styles with the beach surfer looks and the mod rock ’n’ roll vibe of the bikers,” said Roe, the host of NBC’s “Fashion Star” and Style Network’s “Style Pop.” “To make these looks work today, my advice is to limit it to a couple of items. You don’t want to look like you work at a Fifties diner.”