Lyon Porter and Jersey Banks are heading East again. After opening Urban Cowboy Brooklyn, a hip and intimate bed and breakfast in New York’s East Williamsburg in May 2014, the pair decamped to East Nashville to open a second outpost of their creative hospitality concept. Now, they’re scaling up even more, opening a 23-room boutique inn and swim spot, the Dive Motel & Swim Club, in a neighborhood of Nashville still on the cusp of restoration.

“Nashville reminds us a lot of the energy that we felt in Williamsburg and Brooklyn when we opened there; everyone’s talking about Nashville,” says Porter. “We thought we’d offer a little watering hole oasis for people.”

Dickerson Pike is a notoriously seedy stretch, but might be the next frontier for East Nashville’s rejuvenation. City planners have eyed the area, which is the subject of a city study and primed to be rezoned.

Still being on the brink of change, though, created an opportunity for the Urban Cowboy team, whose boutique bed and breakfast is only a few minutes away. Once a major thoroughfare in America — formerly the Old Dixie Highway, and before that the old Buffalo trail — the area went through a boom during the heyday of motels in the Fifties, before falling out of style once an interstate was built in the Eighties and rerouted traffic.

“There are a bunch of motels in a row here because it was right outside of town,” says Porter. “You could pull off with your family or yourself and sleep here and there was a pool here. It was a really nice place.”

A friend of the duo’s, Elliott Kyle, found the 1956 motor inn motel and approached them with the idea of running their own version on the historic stretch.

“He’s like, ‘I think you guys might just be crazy enough,'” says Porter. “When we went to East Nashville, people thought we were crazy for opening a boutique hotel in East Nashville, and fast-forward four years, East Nashville is an amazing place right now, and it was turning and changing back then,” he adds. “Dickerson Pike is kind of very similar to that in that it’s a heavily transitional place, and we’re just really excited to be bringing some good energy to it.” 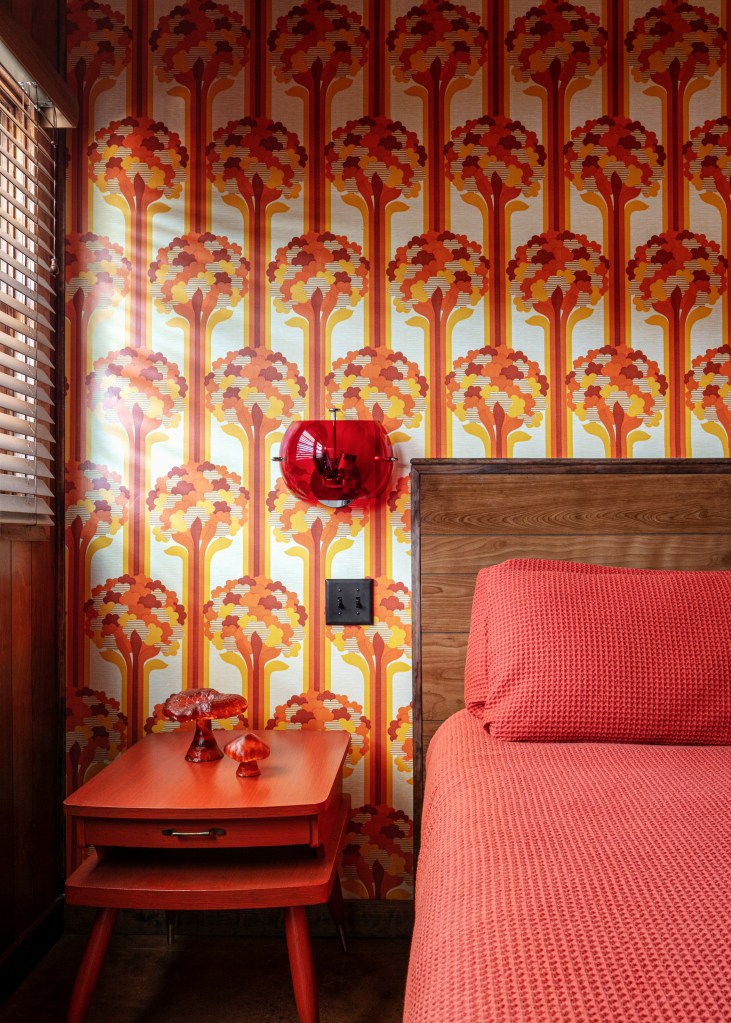 While the nostalgic charm was in place, the decrepit property needed a lot of work. Keeping the structure intact, they doubled the ceiling heights of the rooms and redesigned 23 guest rooms to reflect their core ethos of fun. Each room was custom-designed using found objects from the Round Top market antiques fair in Texas, and there’s a distinct nostalgia at play in the decor, which incorporates wood paneling and vintage wallpaper.

One room plays homage to Elvis; another to “Boogie Nights,” another channels the great outdoors through a scenic backdrop. Each room has at least one disco ball; one of the penthouse rooms has two soaking tubs side-by-side.

“We just like old stuff,” says Banks. “And this project isn’t precious; it is really inclusive and it’s really fun for us.”

Despite the motel model, the property packs in as many offerings as possible, aware that the location means that people are either going to stay on site or drive out elsewhere. The surrounding area is relatively desolate; surrounding motels operate on a weekly basis for people staying awhile as opposed to in town for a fun weekend away. Although boutique, the motel is targeting an affordable price point, with room rates starting at $150 a night.

The property also operates a swim club, the only public pool, other than the YMCA, on the east side of Nashville. Pool memberships will be sold to the public and open to day visitors; in addition to a 60-foot pool and hot tub, the club also has a stage for live performances and an open-air boutique curated by Banks.

“We’re building our dream motel,” says Porter. “If we were cruising into Nashville and wanted to stay at a place with an amazing dive bar and go for a swim, this is kind of it.”

As for their next move — the two are planning to join the urban exodus to the Catskills.