The Costa Brava restaurant and champagne company paid tribute to the chef who Dom president Daniel Lalonde lauded as “the most respected chef in the world.” 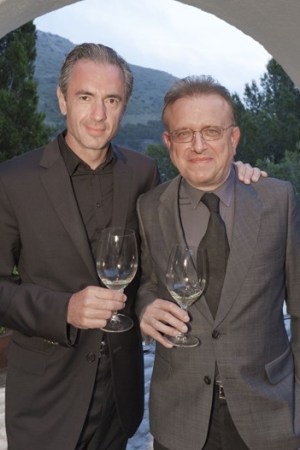 ROSES, Spain — Not surprisingly, gastronomic wizardry and rare vintage wines were the conversation du nuit at a recent dinner party hosted by Dom Pérignon at El Bulli restaurant on Spain’s Costa Brava. The fête paid tribute to Ferran Adrià, who Dom president Daniel Lalonde lauded as “the most respected chef in the world.” It was a night of accolades, “a union of three creators” – Adrià, Dom Pérignon and chef de cave Richard Geoffroy, “who created all the wines – and it’s the first time ever that a single wine is going with all the dishes,” Lalonde said.

“The Champagnes are not meant to go with anything in particular, but everything in general – they’re that versatile,” Geoffroy added. “This is the mother of all dinners,” he exclaimed. “They’re working with great passion in there; it’s just so intense.”

The 47-dish repast, prepared by 48 chefs, was one of Adrià’s last formal events. He’ll shutter El Bulli July 30 “because you can’t win the Oscar every time,” said Adria, whose molecular cuisine earned its first Michelin stars – three of them – in 1996. “After 25 years, it’s time to get out [of the system]. We have always been known for change,” he said, passionately launching into his next project, El Bulli Foundation. Adrià will turn the seaside restaurant plus two additional buildings into “a creative workshop, a think tank for culinary inspiration, ideas and brainstorming with special events and weekly celebrity visits, and it will be open to youngsters with daily Internet information,” he said. “The foundation represents continuity and spirit; it’s a beginning not an end.”

With Adrià, nothing is what it seems. At the pre-dinner reception on El Bulli’s terrace, guests like Heather Graham with boyfriend Jason Silva; Marc Newson, and Ozwald Boateng (all flown in by helicopter) nibbled on wafer-thin tomato “cookies” and codfish crispies washed down with Enothèque 1973.

Later, a four-and-a-half hour marathon of classic El Bulli innovations and six Dom Pérignon vintages kicked off with mojito suckers with a sprinkle of mint and Adriá’s iconic hot & cold Gin Fizz, followed by bite-sized pistachio-stuffed ravioli; frozen gorgonzola cheese that looked like a giant ostrich egg; ham won-ton wrapped in rose petals with melon water on the side; oysters and bone marrow tartar; jellied Tagliatelle Carbonara; barnacles with a dollop of caviar; hare fritters and game meat cappuccino – and on and on into the night. Tthe party didn’t quit until after 4 a.m.

“I’ve never seen such a performance in my life,” said Boateng, wearing a slim emerald green suit of his own making. The London-based bespoke tailor said he was looking for a retail partner in the U.S. “because the brand has matured; it’s ready.”