Downtime in Miami: Where to Eat, Drink and Play During Miami Swim Week

Where to drink, eat and play during Miami Swim Week. 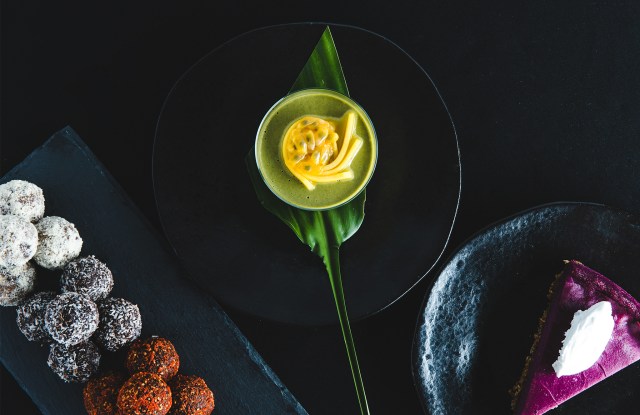 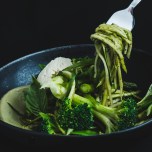 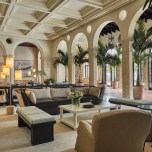 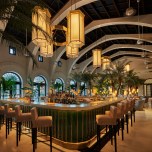 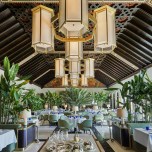 With the exception of Zak the Baker bread, he makes everything in-house, from seeded crackers to pickled watermelon rinds to cashew ricotta. A global menu and cravable dishes, like farro risotto with wild mushrooms, not only sates vegans day in and day out, but also their meat-eating companions.

Beauty Bar: Perhaps the most beautiful bar on all of the East Coast, Le Sirenuse’s Champagne lounge in a converted ballroom dating to the Thirties is just one reason to trek up to the Four Seasons Hotel at The Surf Club. French architect and designer Joseph Dirand refurbished its stenciled ceiling and Florida keystone fireplace and filled the massive space with a greenhouse worth of palms. It’s the ideal spot to have a glass of signature bubbly before dining on tonno tonnato and fagottello Genovese at Le Sirenuse’s adjacent restaurant.

The historic beach club nests below Richard Meier’s new minimal tower with 72 rooms, one of three he designed for the hotel and residences. Dirand also did the blue and white spa, which is participating in Miami Spa Month through August 31. Discounted treatments include a 60-minute cucumber and aloe wrap for $109, and a 60-minute facial, scalp massage, and hand or foot paraffin for $139.

Hole in One: Stephen Starr isn’t the only restaurateur representing Philly in the 305. CookNSolo Restaurant Partners (which includes Zahav, Dizengoff and Abe Fisher) brought Federal Donuts to Wynwood. Founders Michael Solomonov and Steve Cook saw a kindred spirit in the once gritty warehouse district now teeming with tattooed hipsters.

Doughnuts and fried chicken are just what this crowd craves after a late night. Get ’em “hot fresh” or “fancy” in flavors like strawberry lavender and lemon meringue. They even added canned beer for the location.

Road Trip: The Wolfsonian-FIU is taking a summer road trip through the lens of Berenice Abbott. In 1954, the Midwestern photographer grabbed her Rolleiflex camera and cruised down U.S. 1 from Maine to Key West. Fifty of the thousands of images she shot of country life and roadside attractions, as well as her trusty camera, are exhibited in “North and South: Berenice Abbott’s U.S. Route 1,” through October 8.

An afternoon respite when the sun shows no mercy, the dimly lit saloon with checkerboard flooring is already a destination for its generous happy hour. Make it a meal by ordering chicken quesadillas, which don’t resemble their Tex-Mex cousin in the slightest.

Macarons to Maor: The Webster is cooking up exclusive collections all weekend long.

Just as boy and girl meet cute in “La La Land,” photographer Gray Malin and Ladurée fell for each other when the Parisian patisserie opened in Los Angeles. Their romance resulted in two limited-edition boxes of macarons with images from his “Poolside” series and a commissioned work of a balloon-carrying customer in front of the store. The summery confections cost $45 for a dozen; $24 for six.

Los Angeles jewelry designer Maor Cohen is moving on up. After elevating his original line, M. Cohen, he’s launching Maor fine jewelry at a trunk show on July 22. The inaugural collection’s title, “Saturn,” is inspired by the universe and movement. Fifty unisex pieces in 18-karat gold (rose, yellow, white) with and without white and black diamonds retail from $700 to $40,000.

The Webster has the U.S. exclusive until Maor’s namesake boutique opens next door to M. Cohen on West Third Street in Los Angeles in September.

Those Summer Nights: Who else but Ian Schrager to bring the party? His Miami Beach Edition’s Basement, a combination nightclub, bowling alley, ice-skating rink and bar — basically camp for adults — suggests several ways to blow off some steam. Excel, a Los Angeles DJ who’s performed with the Roots and Nas, channels Studio 54 at Discobox on July 21, while a more familiar face in fashion, Virgil Abloh, shares his hip-hop playlist during Saturday’s Boombox soirée. The designer of Off-White rarely makes a Miami appearance so expect a big turnout.
For anyone still standing, A Bikini A Day bloggers Natasha Oakley and Devin Brugman selected a few of their favorites for a pop-up shop in the Bungalow suite on July 22 and 23. Hopefully they’ll have a pitcher of Bloody Marys on hand.