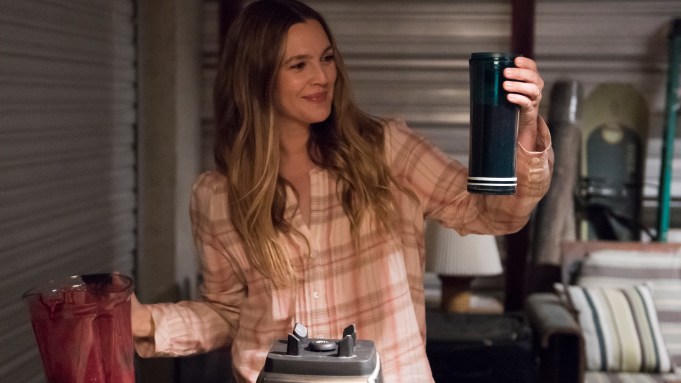 Comedy and cannibalism aren’t a likely match, but in the age of Netflix, anything is possible. “Santa Clarita Diet,” out today on the streaming service, finds Drew Barrymore opposite Timothy Olyphant as a mom, wife and, as it happens, cannibal. Though the last of those might suggest a shield-your-eyes gore fest, the series is actually a comedy. And Barrymore’s cannibalistic moments make for most of the fun.

So how does one transform into a (faux) cannibal for a role? And what on earth is Barrymore tasked with eating? WWD spoke with special makeup effects designer Christien Tinsley, the man with all the secrets to Barrymore’s on-set diet. Here he discusses the show, Barrymore and, yes, gummy bears.

WWD: From the trailer, it seems like Drew Barrymore is some kind of cannibal-zombie hybrid. What’s going on there?
Christien Tinsley: Through a course of events, Drew is stricken with having to essentially become a cannibal. That’s probably the easiest way of putting it without having to say that she’s just a zombie ‘cause that’s not really the goal or the purpose of the show.

WWD: How did you decide how realistic to make the props?
C.T.: Our goal was to juxtapose the laughter and the comedy of the show by giving you this very real, violent sometimes, situation. We had the opportunity to build a lot of bodies, fake bodies, that [Drew] has to consume — sometimes, very comedically. We see a lot of hair being pulled from teeth. We see what areas she likes to start with, things that she obsesses over, what her finger food is now — no pun intended, but there is a reason why we see fingers everywhere.

WWD: So what exactly is she eating?
C.T.: Drew herself is essentially a vegetarian, so a lot of the methods that we might have used traditionally — sushi, tuna coated with fake blood or ground meat or turkey meat or anything like that — was an absolute no. So we had to find other resources. One of the resources that we went to was gummy bears. It’s kind of bouncy, it’s kind of fleshy. If you’ve ever looked at the feeling and the look of a gummy bear and compared it to a piece of raw chicken — very similar. We created a lot of molds that were food-friendly. We made recipes that matched that of a gummy bear and we would create sections of meat that could be attached to an overall bigger effect, and those very specific areas Drew could physically bite into and consume.

WWD: How long did it take to make the mold?
C.T.: Just the process of let’s say the recipe and making some of the meat molds and stuff like that, relatively fast — a few days, perhaps. It took us maybe a week to R&D it and then a couple days to implement it. But the overall effects, like I said, we built a lot of fake bodies for this show and that would take sometimes seven to eight weeks.

WWD: What’s one particular scene that involved a lot of planning?
C.T.: We have a character in a bathtub that they kill, and the plan is they have to dispose of the evidence before they’re found out. The comedy ensues because people are now starting to come over. They’re starting to hang out and linger and they’re panicking to get people out of their home, trying to get rid of this body and of course, Timothy [Olyphant] looks at Drew and says, “You gotta eat him. You got 10 hours ‘cause we gotta get out of here.’”

The whole evening is spent inside this bathroom trying to consume this body. We made three different versions of the body during its phases of consumption and of course, the husband comes in to help as she’s pulling hair out of her teeth. She’s like, “Shave it down.” So he’s sitting there trying to shave the body down so she can eat faster.

WWD: Were any of the props perishable?
C.T.: No, it’s a good question. Some things do have time limits on them. However, in this case, all of the pieces that we make are made out of silicone — probably an element that most mimics flesh.

WWD: Did Drew actually swallow the mold on set?
C.T.: Sometimes, sometimes. I mean, look, it was all safe to consume, however, it’s the movie magic.

WWD: What was it like working with her?
C.T.:  Drew was a real magical presence…. It’s very rare that you do work with somebody like that. She came on set, she was professional, she was on time, she made sure the entire crew was taken care of, meaning just walking into set and saying, “Here we go, guys, let’s have fun. We have one of the best jobs in the world.” That alone sets the stage for a very pleasant situation ‘cause we’re gonna put her through the ringer a little bit.

When it came to the constant amount of blood in her mouth and the constant amount of items that she had to digest, that can be a little traumatic…. Many times, she would be the person to grab the blood and be like, “I want more here and I’m gonna do this” and just bit into it and be a part of the process. That’s great ‘cause then you don’t have to tiptoe around, “Can I put a little bit on your cheek? Is that okay?” She had a blast with it.