Rabbit Hole star Aaron Eckhart seeks the humanity in every role he plays. 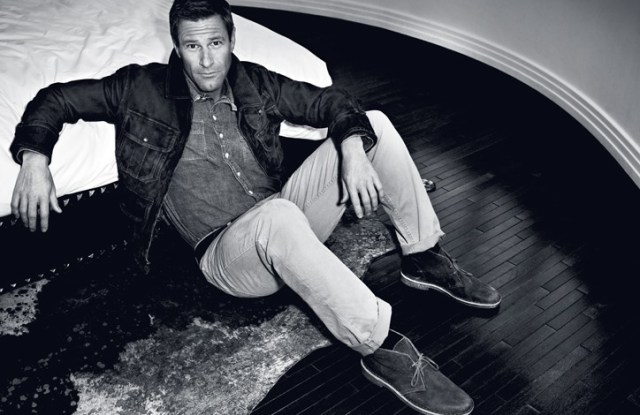 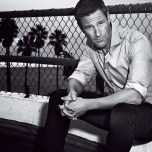 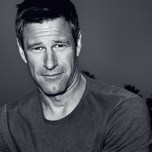 Having a conversation with Aaron Eckhart can feel a bit like chatting with a more pensive version of Nick Naylor, the sly, charismatic-to-a-fault Big Tobacco spinmeister he so convincingly channeled in Thank You For Smoking. The sandy-haired, clean-scrubbed actor is thoughtful and polite as he reflects on his career in the penthouse suite of Santa Monica’s Hotel Shangri-La. But a simple discussion about the spate of less-than-likable parts he’s had quickly turns into a twisty meditation on the paradox of human nature.

“A role where somebody wants me to play the bad guy, I probably wouldn’t even read it [today],” he says flatly.

What about the malignant Chad from In the Company of Men? Would he play him now?

“I would….That’s the problem. I never think the bad guys I play are bad guys. Harvey Two-Face”—the acid-scarred villain he portrayed in The Dark Knight—“I don’t think is a bad guy. What they do is bad, but I look at them as having a story, like as the protagonists. So all of my bad guys are good to me. Even Chad. I’m just trying to make them human.”

But didn’t women on the street call him an asshole after he appeared in that role?

“I was in Rome the other day and I saw classic Chad and this girl, and I was having lunch right across from them, and I wanted to go over to that girl and just go, ‘Run.’ She was absolutely in love with this guy, and he was a scumbag through and through,” Eckhart says. “I see [those guys] all the time, guys who are cheating on their wives in the city, going out and getting wasted in strip clubs….As an actor, I don’t judge that kind of stuff. As a person, I might—which I don’t feel is relevant to the public—but as an actor I look at it and use it.”

“How many times have I been at a wedding where the groom has come up to me and talked about f—ing around right as he’s getting married? Now is that guy a bad guy? Because if you put a camera on him and film that scene, the audience would hate him. He’s a douche, right? But if I put the camera on him at another time and he’s happy, they would love him. In other words, we’re all douches. We’re all heroes.”

In his latest role, in the movie Rabbit Hole, an adaptation of the David Lindsay-Abaire play, Eckhart is neither douche nor hero. As Howie, one part of a seemingly perfect couple dealing with the recent loss of their young son, Eckhart is the responsible, warm, keep-it-together guy in contrast with the withdrawn, mourning specter of his wife, Becca (Nicole Kidman).

“I think it might be the most vulnerable I’ve seen him. It pulls together all of his different skills—the comedy, the drama—yet he’s required to be an open wound at the same time,” says the film’s director, John Cameron Mitchell. “The other things he’s done are, I think, excellent work, but this is one where you actually see the breadth of his talent.”

Eckhart has a more modest take on his performance.

“You just got good words to say in the script and the director tells you what to do and it’s not that hard, you know what I mean?” he says, swirling a glass of orange juice with ice. “I mean, it’s not any great shakes. I think anybody could have done it.”

His co-star would clearly disagree. As a producer of the film, Kidman handpicked Eckhart for the role, even before the director was signed on.

“He’s just so American, which is great….And even though he’s not married, he has this kind of center like he’s a married man,” says Kidman. “He has an almost morality about him and a sense of justice and fairness, and I thought that was important for Howie.”

Those qualities have certainly become more important to Eckhart as he’s gotten older. Children, relationships and marriage are recurring motifs in his conversation, both professional and personal.

“I really like playing, despite my circumstances, family-centric films, because I feel even though I don’t have those, as I get older, I’m more concerned about relationships and teachable kind of films, where you’re dealing with skills that people can use,” says the 42-year-old actor, who admits without hesitation that he’d like to be settled himself.

“I see a good marriage as people who are human beings and qualified to play any role. Everyone wants to be challenged in their relationships; if it’s a one-sided thing, it’s not an appealing romantic relationship,” says Eckhart, who doesn’t believe in the stereotypes of traditional gender roles—the man strong and the woman weak—adding, “It’s probably why I’m not married.”

Eckhart’s penchant for family life is understandable. Born in Cupertino, Calif., the son of a business executive father and writer mother, he was the youngest of three boys. The brood moved to London for dad’s work when Eckhart was 13, and it was there that, at 14, he had his first brush with acting, playing the lead in the school’s Charlie Brown: The Doctor’s In despite being an avid athlete.

“I have absolutely no idea why I went to the audition…[but] from then on I knew I was an actor,” he recalls. “It clicked inside of me. I wasn’t particularly talented at it, but I just loved it.”

Raised a Mormon (“I’m not the poster child for it—it’s one of those situations where it’s in my blood, I grew up that way, I’m not, as they say, practicing”), Eckhart spent a few years after high school on missions in Switzerland and France before attending Brigham Young University, where he befriended his future partner in cinematic crime, Neil LaBute.

“He had a surf rack on top of his Subaru. And whatever he’s driving now, I’m sure it has a surf rack on topof it,” says LaBute, who met the actor when he was Eckhart’s TA. “It was a class in ethics in film and neither one of us had any ethics, so we quickly banded together.”

After college, Eckhart moved to New York, where he worked the typical struggling-actor scenario until LaBute cast him in his first film, 1997’s In the Company of Men, as the plotting Chad who convinces a co-worker to join him in a revenge pact that involves romantically leading on a deaf woman.

“He could handle the language, he understood what I wanted to do thematically, but he was [also] just this kind of brilliantly bright and handsome person who I could put out there saying these kinds of bad things,” says LaBute.

The pair have continued to collaborate on no fewer than four projects—among them Nurse Betty and Your Friends & Neighbors—as Eckhart has amassed a diverse body of work that includes romantic comedy (No Reservations), action (The Core), satire (Thank You for Smoking) and drama (Erin Brockovich). This March he’ll star in the blockbuster Battle: Los Angeles, and he also has an upcoming part, opposite Johnny Depp, as a seedy businessman in The Rum Diary.

Perhaps as a product of such a polyglot lineup, the tagline of “It” boy status has seemed to follow Eckhart over the years without the accompanying jump to “Leading Man.”

“He’s a character actor trapped inside of a really handsome visage,” LaBute says, then immediately corrects himself: “I don’t mean trapped—you know he’s able to be quicksilver. For a while I think he was dealing with ‘You’re the next Robert Redford’ when he really should have been groomed to be ‘the first Aaron Eckhart.’ ”

“I’ve been doing this for 12, 13 years professionally, with the best people in the business, and I’m still looking for that thing to…” Eckhart begins.

But then his meditation takes another turn:

“It’s not for movie stardom. The only reason is to then go off and make the films that you want to make.

“Look, I’m done. I’m an old man,” he continues. “It’s for other people now, and I have to go and try to please myself. That’s the trick now.”