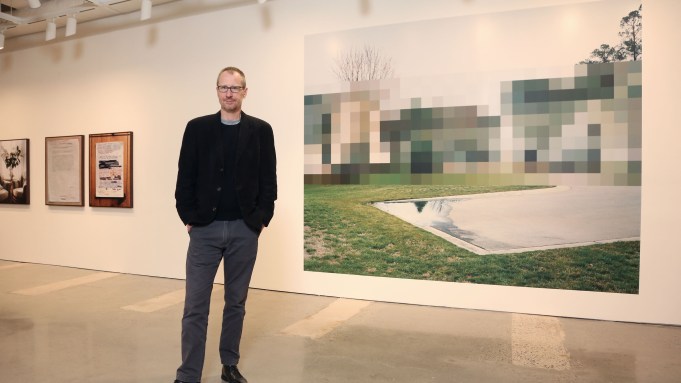 Don McLean’s “American Pie” plays overhead as visitors to the International Center of Photography Museum in New York descend the staircase into the basement level, where an exhibition of British photographer Edmund Clark’s work is on display.

“That was the song of my childhood,” offers Clark, turning his attention to the wall where McLean’s song is listed along with tracks from Eminem and Christina Aguilera to the innocuous “Meow Mix” jingle and theme song from a PBS show for young children. A seemingly random, if nostalgic, assortment.

“It’s a list of tracks that we used for sleep deprivation and interrogation purposes in American military prisons in Iraq and Afghanistan,” Clark clarifies. “Once you know that [‘American Pie’] was used for those purposes, it sort of changes your relationship to it. I can’t hear those lyrics again really without thinking about it in relation to how it was used in another context.”

“Edmund Clark: The Day the Music Died” takes visitors through eight series the photographer has produced over the last decade around the themes of the global war on terror. “It’s a reflection really on how terror has affected all of us,” he adds. “The potential threat of terror, how those measures impacted on us in terms of how it affects our culture, how it affects our standards, norms and ethics of legality, and how it sort of seeps into our everyday lives,” he continues. “That’s what terror does — to makes us live with the potential of that threat, and how that moderates our behaviors and moderates the societies we live in.”

It’s the third iteration of the exhibition, which has also been mounted at the Zephyr Mannheim in Germany and at the Imperial War Museum in London. Although much of the exhibit relates specifically to American approaches and processes, it’s also a reflection on how Clark’s vision of America, shaped through culture — television, films, music — has been challenged.

The exhibit includes walls papered with redacted records of  “extraordinary rendition” and photographs of seemingly ordinary buildings: black sites. In one large photograph, the house of a pilot who flies rendition flights is redacted through scrambled colored pixels. On another wall is a series of photographs taken of living spaces at Guantanamo Bay and its American naval base; people are noticeably absent from all of the photos, an attempt to get people to engage with the subject matter without the influence of subconscious bias. The exhibit also includes a new installation of photographs from American military prisons, released through the freedom of information act, which are projected onto the walls of a darkened space.

“One thing my work is about is trying to find visual strategies, creative strategies, to bring out unseen processes and experiences which have been going on, and [which] I think need recording and registering,” Clark says of his approach. “And in an art context [so that] an audience can find the space to go behind the spectacle on their screens.”

The ICP show is running concurrent with another exhibition of Clark’s work at Flowers Gallery in Chelsea. “The Mountains of Majeed” showcases a series of his photographs of the Hindu Kush mountain range taken while he was visiting a military base in Afghanistan, as well as idealized paintings of the same mountain rage by Afghan artist Majeed. The series plays with the two different experiences of the same landscape.

Robin Rhode Explores ‘The Geometry of Colour’ at Lehmann Maupin

Abstract Painter Hans Hartung Is Having a New York Moment