The Lebanese architect was chosen to redesign famed restaurant Jules Verne, located on the second floor of the Eiffel Tower in Paris.

The new Jules Verne restaurant at the Eiffel Tower

PARIS — It’s quite fitting that a woman was chosen to redesign the famous restaurant of the “Iron Lady.”

“To be able to say ‘hello ladies’ upon arriving on a building site sounds like nothing, but it’s a big step for humankind,” laughs Aline Asmar d’Amman, the architect who was chosen to revamp the Jules Verne, the restaurant located on the second floor of the Eiffel Tower, 410 feet above ground.

The Lebanese architect is part of the new creative team taking over the establishment, working in tandem with chef Frédéric Anton of Michelin-starred restaurant Le Pré Catelan — who aims to turn the restaurant into “an unmissable gastronomic destination in Paris” — as well as a host of feminine figures.

“There were a lot of women involved in this project,” continues the architect, speaking during a private visit of the just-finished Jules Verne, which is due to open on July 20 after six months of renovation.

She cites the mirrored wall panels created by Ingrid Donat, the dark patina with gold leaf inserts covering the walls of the entrance hall crafted by female artisans and the intricate metal table centerpieces by Lebanese artist Marie Khouri.

“I wanted to showcase the best of feminine creativity,” says Asmar d’Amman, who founded her architecture studio Culture in Architecture in 2011 and is best known for having overseen the decoration of the Crillon in 2013.

“It’s not always easy to be a woman in this field. But I feel perseverance is a very feminine trait: Once the machine starts, you can’t get it to stop. I hope this project triggers something within women architects, decorators and artists, and encourages them to never give up.” 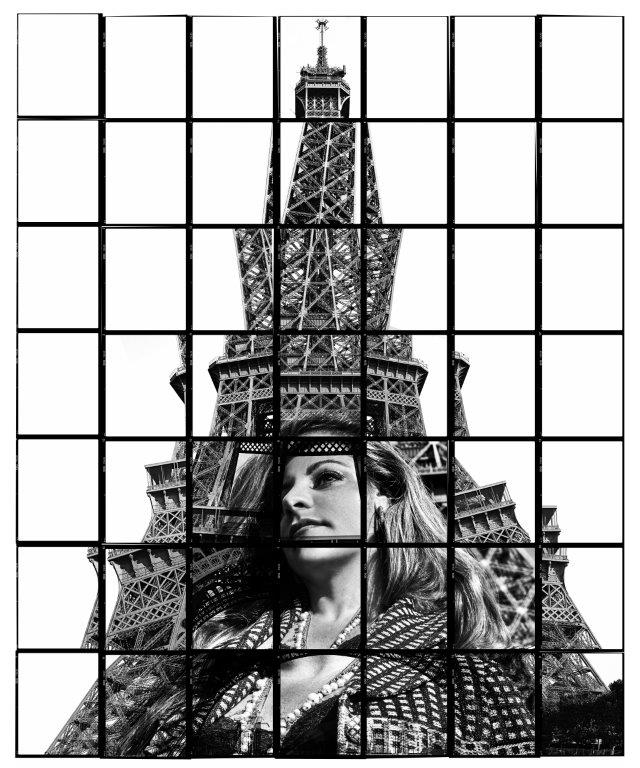 It is hard to rival with the lady herself, though.

The restaurant’s main feature remains the breathtaking panoramic view from the Eiffel Tower, stretching from the Sacré-Cœur to the Tour Montparnasse with the silvery river Seine snaking through, a true love letter to the beauty of the Parisian skyline.

Mindful of this unique feature — it is actually hard to focus on anything else upon entering the restaurant as the effect is so powerful — the architect chose to deck the 2,360-square-foot space in a light gray palette from floor to ceiling, inspired by the hue of Parisian slate rooftops and the surrounding clouds. This allows the three main reception rooms to bask in the sky’s glow, reflected in the mirrors dotted around the space so that each and every seated guest gets a glimpse of Paris.

The restaurant’s ceilings are decorated with light brushstroke details, reminiscent of the painted ceilings of traditional French monuments, and feature circular light fixtures which nod to the huge wheels operating the tower’s lifts. These are particularly visible from one of Asmar d’Amman’s additions to the space, a seated counter overlooking the heavy machinery.

All the furniture was made to measure for Jules Verne and exclusively by French artisans, aside from the five stunning main tables that were crafted by a marble specialist in Venice. The result mixes both references to the tower’s history — most seating is made out of sleek gray velvet, a nod to Gustave Eiffel’s velvet-covered furniture in his former apartment located at the very tip of the tower — and odes to Parisian elegance, like a table pedestal that echoes Suzanne Belperron’s Art Deco jewelry or another reminiscent of the drapes on dresses by Jeanne Lanvin.

Karl Lagerfeld, who collaborated with Asmar d’Amman on the Crillon renovation and became a close friend, donated the huge black-and-white photo of the tower, snapped by the designer himself, that hangs in the restaurant’s alcove space.

“He told me he’d gift it to me once the project was over,” says the architect, whose first instinct when starting her research was to head over to the couturier’s 7L bookstore on the Rue de Lille, where she finds most of her art books. The designer died before the restaurant’s completion, but his wish was evidently communicated to his loyal team. “Karl always keeps his promises,” she smiles. 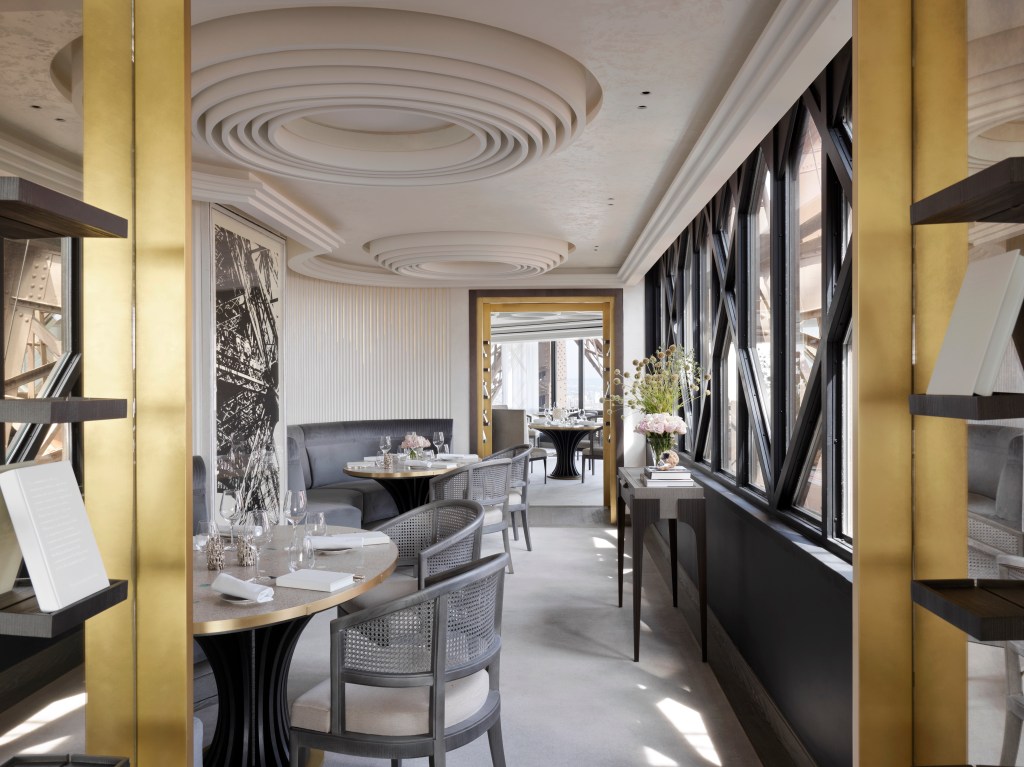 On the left, a black and white picture by Karl Lagerfeld  Stephan Julliard

Built between 1887 and 1889, the Eiffel Tower welcomes 6 million visitors a year, 80 percent of whom are international.

Succeeding Alain Ducasse at the Jules Verne, Chef Anton will hold his position for a duration of 10 years, as part of a contract operated between the Société d’Exploitation de la Tour Eiffel (SETE) and Umanis, a partnership between Anton; Thierry Marx — who oversees the Eiffel Tower’s brasserie on the first level of the tower; French food services group Sodexo, and tech start-up Ubudu. The restaurant aims to boost its number of clients by 40 percent in the next 10 years.

Creating a foodie destination within France’s most famous monument wasn’t without its technical issues, though.

A special permit had to be issued by the Paris mayor’s office in order to build an automated platform at the restaurant’s entrance, located on the southern foot of the Tower, allowing wheelchair users to access the restaurant, and as no live flames are permitted anywhere on the premises, the chef had to rely on electricity to power his kitchen.

“I got stuck in the elevator for 25 minutes the other day,” Anton reminisces about the construction days, back when the team had to use the service elevator (a brand new one has since been fitted). “And I’ve had to use the stairs a couple of times. But that’s just the Eiffel Tower for you — she’s been around for 130 years, you just have to live with it.”

The chef, who will divide his time between the Jules Verne, where he is aided by Pré Catelan alum Kevin Garcia, and his three Michelin starred-restaurant, refuses to consider the restaurant’s main attraction as a challenge.

“Of course you’re initially overwhelmed by the view, but then the food arrives and you start to forget the surroundings,” says Anton, whose set menu for the Jules Verne includes langoustine ravioli with parmesan cream and truffle jelly, caviar on a bed of leek flan as well as curried crab tucked under a soft apple meringue, and is priced at 190 euros, or $213. “My aim is to turn the Jules Verne into a real gastronomy restaurant, and not just somewhere spectacular you choose to celebrate a special occasion.”

The chef, who had to buy an electric scooter to shuttle between his two establishments, visibly softens when asked how he feels about manning the kitchen at one of the world’s most famous monuments.

“There is a lot of emotion, of course,” says Anton. “I wonder, what I did to get here — in a good way. What could have possibly happened in my life that made me get to this point? Luckily, I’m not afraid of heights.”