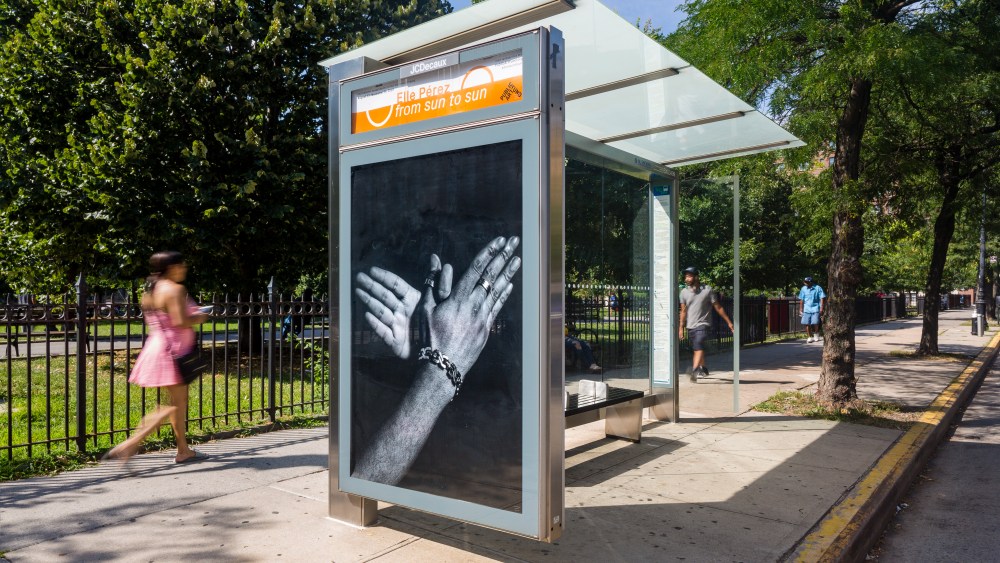 Outdoor advertising company JCDecaux is giving up some prime real estate in the name of art.

The outdoor advertising firm — which manages the ads for bus shelters in New York City — has donated use of the space for a new collaboration with the Public Art Fund. Kicking off the project is photographer Elle Pérez, a native New Yorker who mined their personal history in the city for “From Sun to Sun.”

Pérez, whose work is currently on view in the Whitney Biennial and who had their first solo museum show at MoMA PS1 last summer, was excited by the prospect of creating new work to live in public spaces that would be encountered in daily life.

“The idea of walking around and having a different interaction with a space that wasn’t either a public service announcement or an advertisement, creating a third category in that space, seemed really cool,” Pérez says at a coffee shop in Harlem the afternoon before the project’s official unveiling.

“Especially if every day you take the B38 [bus], if that’s your daily commute, then every day you’ll be seeing this,” says the artist. “It’s actually rare you get to do that with a piece of art unless you own it — and maybe if they notice it at all. But also, it’s cool to have an ad that’s selling nothing.”

Pérez, who grew up in the Bronx and currently resides in Brooklyn, started the project by walking around familiar neighborhoods and retracing steps in the city. “Really looking in places that I was so familiar with, that maybe I wouldn’t have a sustained engagement of looking,” Pérez says. Many of the resulting photos offer a new way to see familiar places and objects — a configuration of bikes jumbled on the sidewalk, the weathered exterior of a door — and others are intimate portraits of people and gestures that Pérez has known for many years. One sequence of five photographs, “Flight,” documents the various steps of a handshake that was created by their friend Jay P. Fury in the Bronx punk scene.

“That became the handshake for our group of friends,” says Pérez. “When we were photographing it and [Jay P. Fury] was like, ‘It’s so funny, now people I’ve never even met do the same thing; they know how to do [the handshake].’ And it’s really interesting to think about how that can travel throughout people, but can also be a kind of traceable history or alternative history that wouldn’t necessarily be recorded otherwise.”

The 16 new photographs are displayed at 100 bus stations throughout 13 residential neighborhoods such as Northern Brooklyn, the Bronx, Northern Manhattan, Staten Island, and Sunnyside in Queens. The images, which were taken with an exploration of sequencing in mind, are dispersed in various groupings; in the case of the handshakes, some are placed so that the entire “Flight” is visible over the course of a short bus ride or walk, while some locations exhibit the images solo. Each image repeats six to seven times throughout the city.

The majority of the photos are black and white, underscoring the graphic nature of the imagery, and the large-scale nature of the work presents an opportunity to pick out and focus on details — the glitter polish on a male hand reaching a fork into a dish, or the word “pray” etched into a subway seat of the B train.

“I thought that was really interesting as something that someone would choose to graffiti or scratch into the subway,” says the artist of the photo, which serves a record of a more anonymous human gesture. “You see traces of other people who have also inhabited that space without necessarily seeing them.”

Pérez recently returned to New York after spending the summer teaching at the Skowhegan School of Painting and Sculpture in Maine; in a few weeks, they’ll start the fall semester at Harvard, where they’re teaching a course exploring expansive art practices. The artist credits the bus shelter project for pushing their practice in that same vein.

“One of the things that was really interesting to have to rethink through was this different medium. Normally when I print I have superior control over color, I have superior control over tone, the images are on the wall and that’s what they’re going to look like,” says Pérez. “But with this I was like, oh, we don’t — or the color might vary; who knows what’s going to happen to these things. They’re sort of given to the street in that way,” they add. “I really don’t know how people are going to react.”