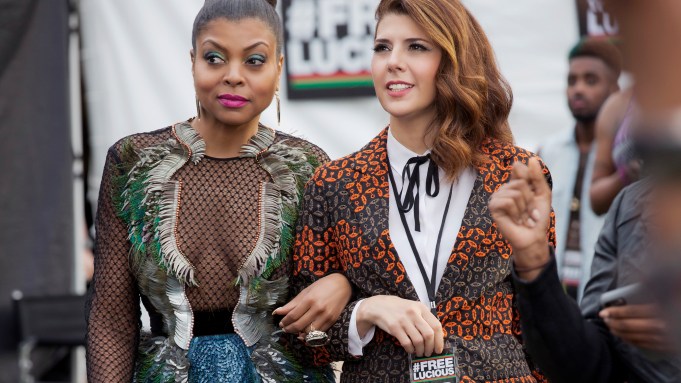 When viewers tuned in to the season two premiere of “Empire” last night, they were likely looking at more than just the storyline. Fashion has emerged as a leading character in Fox’s hip-hop dynasty soap opera and designers have been scrambling to get on board. Everyone’s favorite character-of-the-moment, Taraji P. Henson’s Cookie, led the movement last season, but this time around, everyone is getting something of a makeover, with brands like Gucci, Moschino, Tomas Maier, Hood by Air and Ann Demeulemeester making an appearance. Here, “Empire” costume designer Paolo Nieddu, an Emmy nominee this year, talks budget, high fashion and what Cookie was wearing under that gorilla suit.

Cookie undoubtedly has the most fun costumes on the show. What were Lee Daniels’ initial notes on her look?
Initially, I had done a bunch of tears — like from Vogue — of a python trenchcoat or the Stella McCartney stuff. I had put together these boards for her and he was like, “no.” He was like, “I want it to come from a real person, because she’s not a celebrity.” And so that was really challenging — how to find pictures of real women in clothes that aren’t so high end, and then take that and stylize it. I ended up going to people’s Instagrams, and searched for hashtags like #leopardprint or #tbt1996. I actually found a mugshot picture of a lady in a leopard dress. I was able to find stuff like that and then mix it in. And Lee thought that felt more like the world she’s coming from. She’s not coming from the Vogue fashion closet.

Do you buy or borrow clothes?
Mostly buy, because of the pace that we film at and the availability of samples. It’s funny because people are like, “Oh, well they must just be throwing clothes at you!” And it’s not that — [for each brand] there’s one set of working samples in the United States. And, yes, I could go through Fendi’s fashion show — and they do loan to me — but if look 26 is the one I know will look good on Taraji and it’s out for a “W” shoot, I’m not getting it.

Are designers more compelled to loan now that “Empire” is in its second season?
Yeah, for sure. I think now people have seen it and the designers themselves are fans. There’s definitely more of a response. When I did the pilot I didn’t ask [designers] because we didn’t have time and it wasn’t really something we could do. [This time around], Stuart Weitzman reached out and his team said “hey we’d love to loan you guys some shoes and offer you a discount in the store.” And that was really great — and we did. I got Cookie the “Nudist” shoes.

What’s the budget like?
The budget is less than $45,000. I definitely do get things loaned and with Cookie I’ve been able to use a lot of bags for free. With the boys it’s a little bit easier — we build a closet and they don’t need to change [as much]. Jamal [played by Jussie Smollett] has some Saint Laurent silk button downs and he wears them over and over. So if it’s an $800 shirt, he can wear it three times and the cost-per-wear is factored into my budget. Same with Terrence [Howard, who plays Lucious]. His tailor made us 10 suits and we have  shirts and we sort of just mix and match that. We’re not shopping for $2,000 suits each episode.

Talk about Cookie’s outfits in episode one.
Under her gorilla suit was a Gucci dress from a couple of seasons ago that I rented from Albright Fashion Library in Cooper Square [New York.] We would have never had the budget to buy that dress. And that was inspired by the Marlene Dietrich movie “Blonde Venus” where she comes out of a gorilla suit at a cabaret performance, and she’s in this tribal feather dress. Initially Lee had her in a “Free Lucious” T-shirt but then I had the dress FedExed over and I showed it to him on the hanger and he was like, “The dress is fabulous.” I didn’t care that it was a few seasons old, and André Leon Talley totally ad-libbed, like, “Gucci, last season!” But I thought that was kind of great. We also saw her in a denim patchwork outfit, when Lucious says, “Why you coming in here looking like Mr. T?” The jacket and the skirt were Moschino, and then I put a Wolford bodysuit underneath it. She had Christian Louboutin shoes and bag, and then I piled on Kenneth Jay Lane jewelry. It was a very Nineties homage moment.

What about the guys’ fashion?
For Hakeem’s performance in the beginning, the “Free Lucious” concert, he had on Moschino black satin cargo pants, a Bottega Veneta flannel tied around his waist and Hood by Air boots. So his look was very street but also very luxe. Jamal’s performance look was his classic silhouette: a clingy Ann Demeulemeester Henley, really skinny Rag & Bone jeans and Saint Laurent suede cowboy boots. When Jamal goes to visit Lucious in jail, he has this Tomas Maier suede jacket with an Acne V-neck sweater. For Andre, it was the first time we saw him working not in a suit. I had him in a Lanvin polo at the concert, with black Theory dress pants and Jimmy Choo loafers. And Lucious was in his prison oranges. They’re from Western Costume in L.A. — they’ve probably been in a million prison scenes in other movies.