Feast for the Eye: Empire Diner Reopening in Chelsea

Executive chef Amanda Freitag will take the helm in the kitchen when the diner opens its doors on Tuesday. 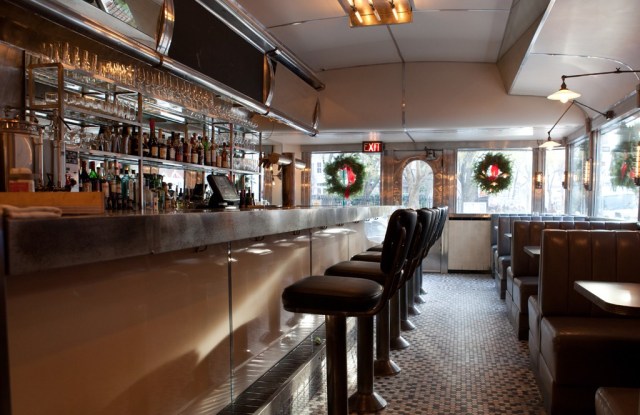 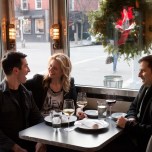 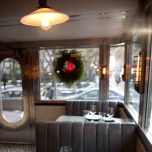 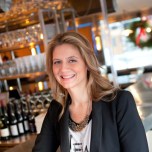 What’s old is new again — and the Empire Diner is no exception.

Situated on the corner of 22nd Street and Tenth Avenue in Manhattan’s Chelsea neighborhood, the Thirties-era diner that can double as a mobile home is reopening its stainless steel doors under the direction of executive chef Amanda Freitag.

This story first appeared in the January 6, 2014 issue of WWD. Subscribe Today.

Freitag, who is known for her work as head chef at New York eatery The Harrison, as well as for her frequent appearances on the Food Network, will take the helm in the kitchen when the diner opens its doors on Tuesday.

“I live around the corner. I’ve walked by it. I’ve eaten here in the past. I didn’t even imagine that I could be the person who could bring it back to life food-wise and restaurant-wise,” Freitag said.

The chef, who is also part owner of the diner along with Mark Amadei and Andrew Glassberg, the duo behind swank-ified comfort food joints Cafeteria and Delicatessen, wants to “redefine the concept of a diner.”

What Freitag and her partners are hoping to re-create is the magic of the Empire Diner’s past. While it might not look like much, the retro diner has played host to a gaggle of celebrities, from Madonna and Julia Roberts to Ethan Hawke, Kate Winslet and Steven Spielberg.

“Harry Connick Jr. played piano in the corner when there was a piano here,” noted Freitag, who added that for the neighborhood, the restaurant has sentimental significance. Although the space reopened as the Highliner for a brief period in 2010 and then shuttered in 2012, the space never reclaimed the cool status of its heyday.

“When I told my parents [we were reopening it], they said, ‘You’ve got to be kidding me. We used to come to the diner in the late Seventies and the early Eighties after we went dancing all the way in west Chelsea,” Glassberg chimed in. “This was big news for them. They were very excited.”

For now, the diner will just be open for dinner, but the restaurant will eventually embrace its heritage and remain open 24 hours a day. It will have a seasonal menu, but will always offer diner favorites such as omelets, pancakes and milkshakes, alongside higher-end fare such as whitefish, roasted chicken, steak and gravlax with caviar.

“It’s our fantasy diner, but price-wise, it’s not too elevated,” said Amadei, who explained that the food would be higher quality than normal diner eats. For one, the ice cream will be made in-house. Smaller plates will run from $7 to $12 while entrées will cost between $15 and $28.

In order to better serve the neighborhood, which consists of a smattering of grade schools and tourist hot spots such as the High Line and various art galleries, Freitag is putting out an after-school special menu featuring things like grilled cheese and turkey nuggets, as well as health-conscious libations, i.e. smoothies and kale-centric juices.

From one of the diner’s smooth brown vinyl booths, Amadei noted the difficulty he had in procuring the rights to the name “Empire Diner.”

“When we pulled that off, we were like, whoa,” he said wide-eyed.

“This place has been around since the Thirties. This is one of the most famous diners in the world,” he offered. “For us to be able to write this chapter for this diner is pretty special.”

This isn’t likely to be the last chapter for the trio, either.

“We’re creating our empire and we’re starting with this one,” Freitag said sheepishly. “This is the first and not the last. That’s all I can say.”