Environment Is Everything at This Williamsburg Café by Day, Restaurant by Night

Apollonia owners Danny Minch and Dylan Dodd wanted to break the mold of how traditional restaurants in New York City work, with an all-day food experience and an adjacent artists' room.

The restaurant's annex space — shown here through the circular window — will serve as a showcase for New York City artisans.

Danny Minch and Dylan Dodd had no plans to open a new restaurant. But one phone call changed that.

The owners of Brooklyn institutions Walter Foods in Williamsburg, Walter’s in Fort Greene and the adjacent Japanese cocktail bar and izakaya Karasu received a message in 2018 from a broker who wouldn’t let up, saying she had a space in East Williamsburg they couldn’t pass on.

“She kept bugging us,” Minch recalls. “She was in the neighborhood, so we went by there.”

What they found was a huge place — even by outside-the-city standards — on the corner of Manhattan Avenue and Meserole Street, boasting 1,500 square feet, high ceilings and tons of natural light. The two restaurateurs were struck by a distinct feeling that this space could house the concept they’d been tossing back and forth to each other. Minch and Dodd envisioned a restaurant that could fulfill all desires, check each of the boxes. It would be open during the day — neighbors could stop in to grab a coffee in the morning on the way to work — and remain open through the afternoon for lunch. Freelancers and other participants of the gig economy could bring their laptops and work for as many hours as they wanted. Then, come 5 o’clock, a full dinner service would begin. The more typical restaurant found in New York City would suddenly appear in that very same space. Plus, the area was large enough to crown with their pièce de resistance: a designated, separate space for local artisans to display their paintings, sculptures, clothes available for sale — whatever. The corner real estate would be perfect. Thus, Apollonia, which soft opened last week, was born. 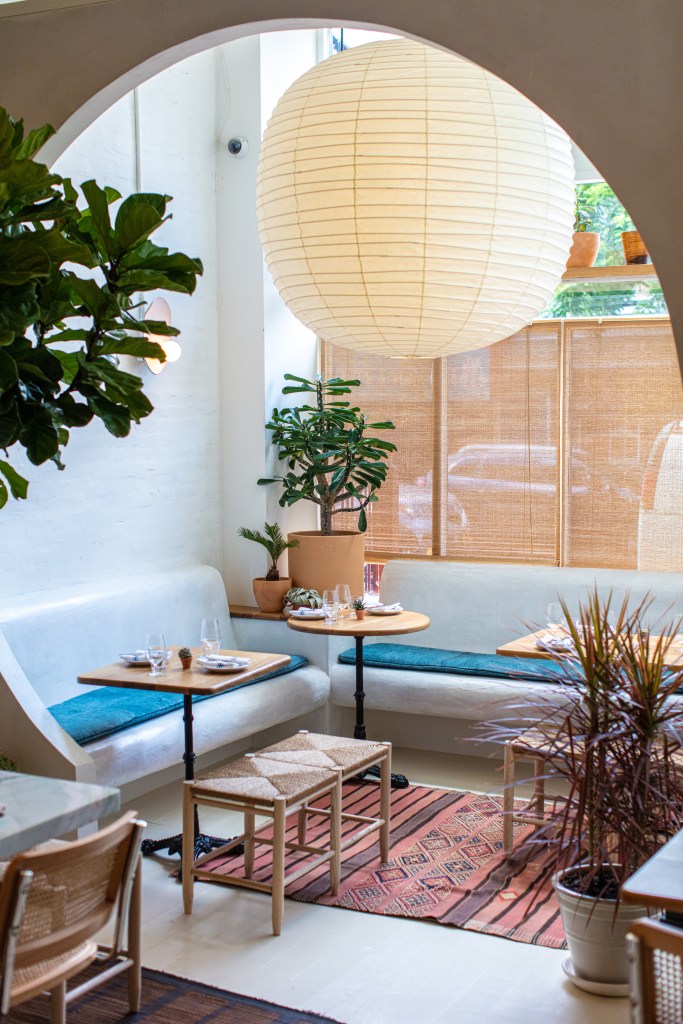 For Minch (whom Dodd describes as “more of the chit-chatter”) and Dodd (he’s comfortable tapping his bussing background and wiping down glasses in the back), the spaces which house their various restaurants dictate the concepts, the vibes there — even the food they serve.

“What really attracted us about the space was not having to pull out a table for somebody to slide in,” Dodd adds. “You can relax and feel like you’re on vacation a little bit, instead of being churned in a two-top for an hour and a half.”

Apollonia’s interior is marked by the ever-popular light wood, lots of plant life and white benches carved into corners that look like pieces of architecture from Sardinia. But one unique offering sets the restaurant’s place as a divergence from the usual Brooklyn eatery. A small, walled-off space in the front of the restaurant will host a revolving door of featured artists’ works. As of now, it’s called the Reading Room. No larger than five feet all around, it’s encased in glass from the outside so people walking down the street can check it out. Different artisans will showcase their work in this small corner; there could also be opportunities for a retail concept. 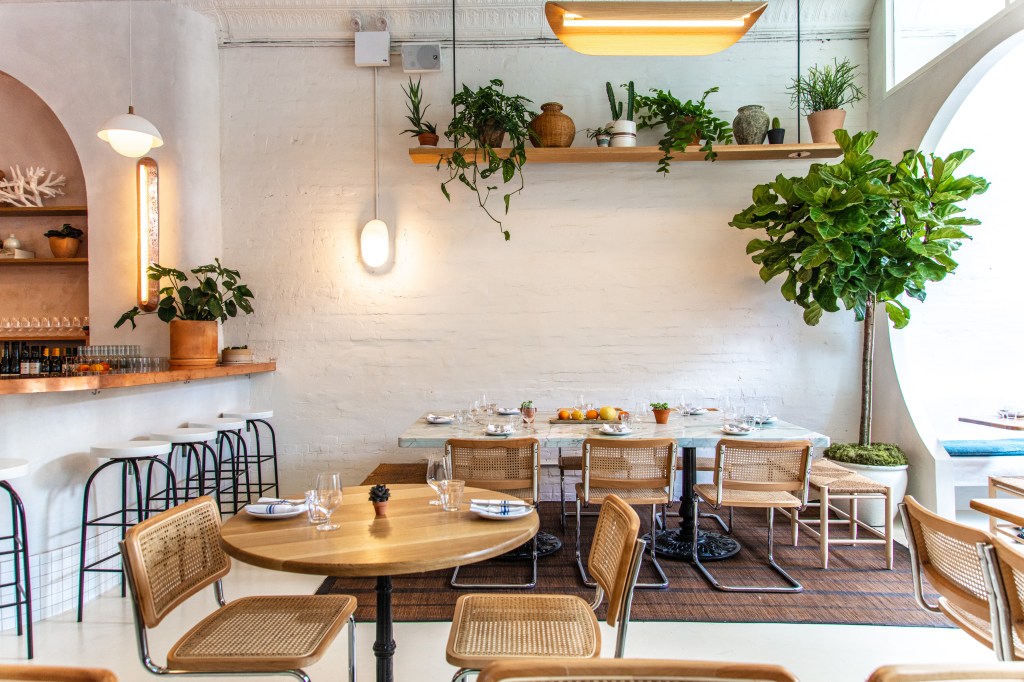 Apollonia is an all-day café that turns into a full-service restaurant at night.  Photograph Courtesy of Apollonia/Henry Hargreaves

“We live in a city where it’s difficult for creative people to find their niche and get their product out there, whether it’s painting, jewelry or shoes,” Minch says. “And we’ve never found ourselves in a position where we could really offer that.”

The overall ethos of the restaurant speaks to where both Minch and Dodd are in their lives. When they first started in the business, they came from bar backgrounds — Minch used to bartend at Balthazar and Dodd owned Barrio Chino, a restaurant on the Lower East Side. They’d spend long nights drinking and partying, then get up to do it all over again the next day. Now, they’ve got families and are trying to take care of their minds and bodies. Where Walter’s has French fries and burgers, Apollonia offers gluten-free fried cauliflower. Other items on the menu — which includes scallop crudo topped by pistachio bits and white anchovies in olive oil with harissa and mint — reflect that same push for a healthier lifestyle. 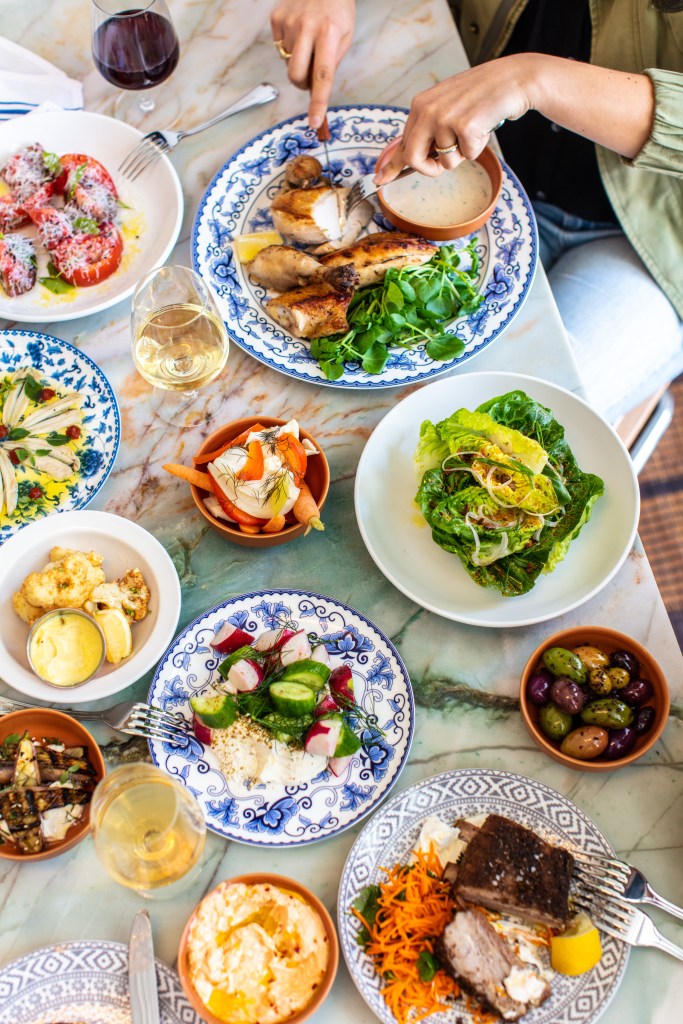 “A lot of our restaurants have been late-night,” Minch says. “We really like the idea of starting earlier and ending earlier, so people can get home reasonably — they’re sleeping well, they’re pursuing their passions outside of a restaurant job, no one’s hungover.”