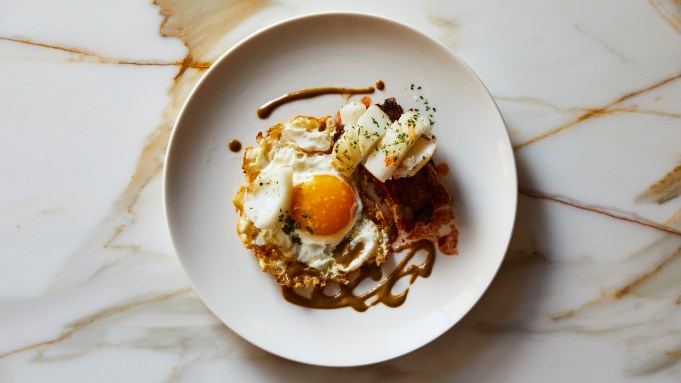 Ryan Bartlow describes one of the dishes on the menu at his new restaurant, Ernesto’s, in tantalizing detail: hake dipped in egg and flour and fried, served with aioli, sweet roasted red peppers and a little bit of lemon. It was the first meal he had when he moved to San Sebastian over 15 years ago, but it’s still fresh in his mind.

“It reminds me of that moment when I first arrived — I was still jet lagged, I was by myself, and I couldn’t even speak the language,” recalls the chef, who went to the Basque region to train as a 22-year-old. He went to a tavern, and the woman who owned the restaurant told him, “I’ve got something for you.” “And she gave me a glass of cider and this dish,” he adds. “And to me, those memories last a lifetime.”

Bartlow is paying homage to that time in his life and his enduring appreciation for Basque cuisine with his first solo restaurant in New York. “I basically opened this restaurant because it’s a place where I always wanted to go to, the food I like to eat — it’s a connection to a special time in my life that I’ll never have again,” he says. “The food is kind of the gateway to my happy place.”

Three years in the making, the restaurant is located in an area of the Lower East Side set away from the gentrified and clubby grid between Houston and Canal. It’s an area more residential than geared toward leisure, and Bartlow has lived nearby for over a decade. While Bartlow expects Ernesto’s to draw a destination crowd, he hopes to stay rooted to the neighborhood. In addition to dinner service, Ernesto’s will soon open a connected all-day café and cozy wine bar. The restaurant’s main corner dining room, outfitted in deep honey wooden furniture and a long bar facing an exposed brick wall, is well lit thanks to wall-to-wall windows, and further illuminated thanks to a series of hanging orb pendants.

The chef is an alum of Quality Eats, which he helped open while getting Ernesto’s up and running; Frenchette, and Alinea. Although he brings years of experience with various cuisines, the menu focuses on traditional Basque dishes, often tweaked, which he first encountered while working in San Sebastian.

“I remember reading Daniel Boulud’s ‘Letters to a Young Chef,'” Bartlow says. “And he talks about if you have the opportunity to travel or work abroad, do it.”

While originally drawn to working in France, his interest in Spanish cuisine began while attending the Bocuse d’Or biannual culinary competition in Lyon as a student in the early Aughts. It was there that he discovered the El Bulli cookbook right as the restaurant was entering its peak years, and Bartlow was mesmerized.

“I went back to Chicago, started hearing about all these [culinary] things going on in Spain,” he adds. “So I do a little more investigation, I see there’s this whole movement going on in the Basque region, especially San Sebastian.”

For his menu at Ernesto’s, Bartlow hopes to tap into the same excitement he had as a young chef, and his menu is informed not only by dishes he learned while working in Spain, but also the surrounding regions — Catalonia, southwest France — with Basque cuisine as the “home base” of the menu. “It’s an homage to that time in my life and it shows all these people who I worked for how much I cared about what they showed me,” he says.

There’s recognizable fare like chicken croquettes and skewers with shrimp, pickled peppers and anchovies, octopus with bravas sauce, and a hake and monkfish mousse spiked with garlic and white wine to smear on bread. There’s a traditional Basque soup, Madrid-style tripe, and Mulefoot, a type of pig that was indigenous to Spain; he’s sourcing meat from an upstate farm. “It’s already become one of our favorites of guests,” he says. It’s a similar case with the crispy pig ear with sepia, lentils and a fried egg: “When you think of all these things it sounds odd, but for a lot of bars in Spain pig ears are very traditional,” he says. “Literally it tastes like bacon and eggs.”

While the cuisine is more accessible than it may seem at first glance, Bartlow isn’t necessarily concerned about appealing to everybody. He might be serving beef (as is common in the Basque region, sourced from old cows), but there’s no hamburger on deck.

“Nothing we’re doing is on trend, because it’s what I like. And some of it just happens to fall in the trend book now, but three or four years ago it wasn’t,” he says. “I think I have a good sensibility about what people like, and you stay true to it. I’m not going to change things to appeal to everybody. Not everyone’s going to like everything, but I think there is something for everybody.”

And if not, you can always grab a coffee from the café.