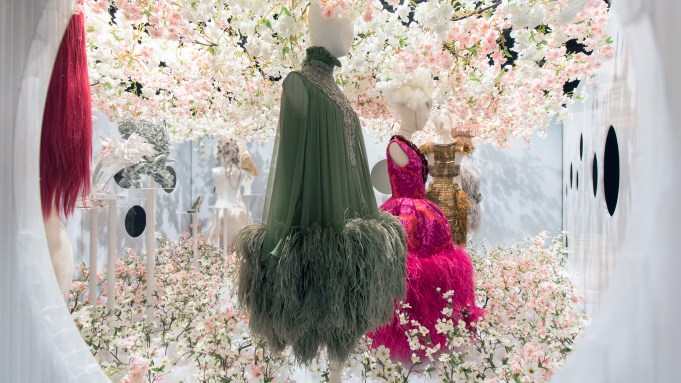 When fashion curator Sofia Hedman first assembled “A Queen Within: Adorned Archetypes” in St. Louis in 2013, she did so with a psychological approach typical to her exhibitions. But now, as a revamped version of the largely avant-garde presentation opens this week at the New Orleans Museum of Art, Hedman’s vision has shifted, along with the collective zeitgeist.

“One thing I’ve learned in the past five years is how politically aware people are today,” explains Hedman, who holds a BA in psychology from Stockholm University. “We wanted now to do something that is quite contemporary and touches on pressing issues such as sustainability, race and inclusivity.”

Comprised of over 100 gowns, shoes, headpieces and jewelry from more than 50 renowned and up-and-coming designers, the museum’s first fashion exhibition explores how pieces of “bold couture” can illustrate various forms of femininity. Iconic pieces from Alexander McQueen, Comme des Garçons and Gucci stand alongside works of photography, sculpture and art including experimental video from South African designer Rich Mnisi.

Calling the exhibition a “celebration of femininity,” Hedman focused her scope of “QA Queen Within” to include only designs of the past decade, building on mythological personality archetypes to illustrate how wearable art can tell a woman’s story in real life.

“We look at the [archetype] of the ‘Thespian,’ who is blessed with imagination,” continues the Swedish-born curator. “We also look at ‘Mother Earth,’ which [investigates] how to make the world more sustainable for the future. Then we have the ‘Explorer,’ who is an independent-minded pioneer, the ‘Enchantress’ or femme fatale, the ‘Heroine’ with a very strong personal morality and, lastly, the ‘Magician’ who is the visionary artist and inventor. She is reimagining a new future.”

Masterfully presenting these lofty concepts has become the norm for Hedman, who in 2010 acted as London-based archivist for The Metropolitan Museum of Art’s Costume Institute exhibit “Alexander McQueen: Savage Beauty.”

“There’s been a huge shift politically in just the last five years,” she observes. “I’m very intrigued with looking at fashion from a sociological perspective, but also trying to understand why we dress as we do and what it means.”

Susan Taylor, the director of NOMA, offers a more straightforward assessment, describing the museum’s latest installation as “definitively [demonstrating] that fashion is art.”

Hedman, who describes New Orleans as “bubbling with creativity and culture,” understands the many layers of symbolism may not reach each visitor of the collection, which is open through May. Instead, her hope is that people “see it as a celebration of femininity, but also makes people think about their own lives and how they dress every morning.”

Integral to each of Hedman’s projects is to create a provocative experience that inspires self-reflection for the visitor, which she argues is often easiest with fashion (over other visual arts) given its daily role in our lives. “Today, you can see a lot of people want to create more communities and it becomes very political. You buy clothes to belong to a community or show you have certain values.”

“Some people say they don’t care about clothes, but then they use fashion to tell a story,” she adds. “There are a lot of possibilities with fashion as an art form and you make a statement when you dress every morning. It’s good to be aware of it.”

Casey Spooner Is Too Full of Emotion