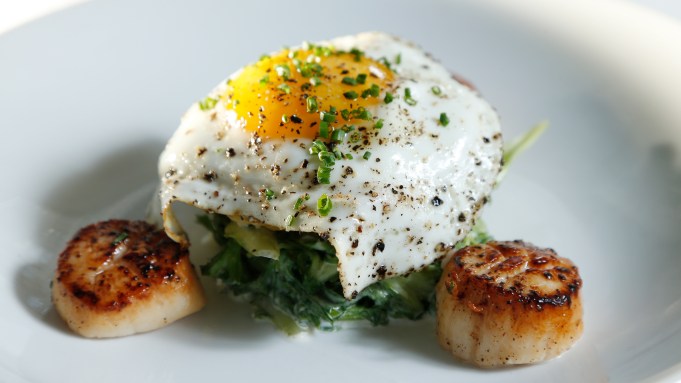 Purdy’s Farmer & the Fish in North Salem has found a pied-à-terre in the city. This week, an outpost of the farm-to-table restaurant opened on Park Avenue in Manhattan’s Gramercy neighborhood.

They’re catering to a similar audience; many of their upstate regulars work in the city and expressed a desire to dine with them away from home. “What we were doing upstate was really well-received. [After] five years, we said you know what, we’re ready to bring it to a larger audience,” Kaphan adds.

“We were looking for an opportunity, and this presented itself to us. It was kind of random, this particular space,” says Taylor, who also owns the sustainable seafood distributor Down East Seafood. The restaurant is supplied with fresh produce from the pair’s five-acre farm in North Salem, as well as from Down East — in fact, they originally met and became friends while Kaphan was working and placing seafood orders as a chef. “As a young cook, Down East was one of the best fish purveyors out there,” Kaphan remarks. “Everyone touched his fish.”

The Manhattan location follows the same formula as its Purdy’s location: an emphasis on hyperfresh ingredients from the farm and seafood from Down East. Although the two locations share a name, the menus at each are unique, with a “handful of fan favorites” on the Manhattan menu — the scallop salad and bacon ribs, for example — and the raw bar remains a staple.

The open dining room features mosaic tile floors and bright brick walls decorated with fishing photographs of the pair’s friends and family. The space is accented with crystal chandeliers and a row of filled white bookcases which rotate to separate the room from a private dining space. A wall-length bar lines the left side of the dining room.

“Farm to table” has become ubiquitous in the dining industry, thrown around to represent both restaurants that pay respect to their local farmer’s market suppliers as well as ingredients grown on rooftops and in city-sized backyards. Farmer & the Fish claims distance from this pack. “There’s only two people with the farm, and it’s us and Blue Hill Stone Barns” in Pocantico Hills, Kaphan stressed, as servers and bartenders began circulating the room in preparation for that night’s dinner service. “There’s a big difference between supplying from our four acres and just buying from vendors.”