Fashion Plates: Where to Eat This Week

WWD's guide to the dining options near Lincoln Center 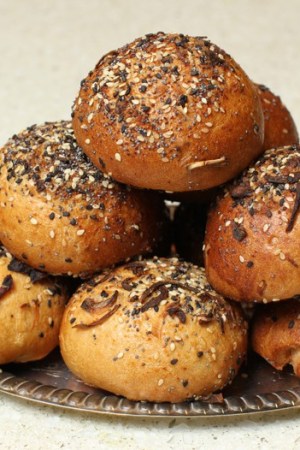 While the overall success of fashion week at Lincoln Center remains to be seen, one thing’s for sure: attendees won’t be going hungry. Here, WWD presents some of the best offerings from the myriad eateries surrounding the Upper West Side venue. There’s something for every palette and mental state — from the carb-craving editor nursing a hangover to the pescatarian intern who just got chewed out by her supervisor. Those extra blocks you now have to walk to get back to the office might not be so useless after all.­

This story first appeared in the September 10, 2010 issue of WWD. Subscribe Today.

Down a little too much free bubbly the night prior? Momofuku pastry chef Christina Tosi, one of several local chefs contributing to Bon Appétit’s pop-up cafe, suggests this bread, packed with soft cream cheese, Benton’s bacon, and green onions, for those in need of starch and grease. “It’s a gourmet take on your quintessential New York breakfast in a grab-and-go package,” she explains.

Conventional wisdom would suggest that this undeniably indulgent pastry — two dense cookies plus a cream filling ­— would be unpopular among the notoriously calorie-conscious fashion flock. But ’Wichcraft partner Jeffrey Zurofsky first observed the snack’s popularity when his restaurant served as the official backstage caterer to the tents at Bryant Park. “We’d put out a platter of salads, sandwiches and cookies and the cookies would go first,” he says. “Models, makeup artists — you name it, they would eat all of them. It’s pretty funny.”

“In their heads, the fashionistas want something that sounds healthy and light,” says Manhattan restaurateur extraordinaire Daniel Boulud, whose (relatively) casual Bar Boulud is across the street from the tents. “But in their hearts, they want something soulfully satisfying.” Thus, the chef recommends this dish made with lardons, sautéed chicken livers, a poached egg and what he describes as “naughty” sourdough croutons. “[It’s] a salad that’s really a meal in disguise,” he says.

Celeb chef Jean-Georges Vongerichten, whose Nougatine is located on the ground floor of the Trump International Hotel, thinks his tuna tartare (plus some vino) is ideal for those looking to calm their nerves. “There’s nothing better than taking a moment off your feet to have some tartare and a nice chilled glass of riesling on our terrace,” he says.

As Barack Obama’s toque of choice when he’s in town, A Voce’s Missy Robbins knows a thing or two about feeding overburdened diners. This salad, she says, is an easy way to refuel after morning shows and before the afternoon madness begins. “It combines protein, carbs and vegetables into one dish,” she explains. “[So] it’s light and filling at the same time.”

Left feeling uninspired and in need of a palate cleanser? The venerable Thomas Keller, who has a whopping two eateries in the Time Warner Center (Bouchon Bakery and Per Se), recommends the sandwiches at Bouchon for their “out-of-the-ordinary composition.” In particular, the chef suggests his smoked salmon with crème fraîche on toasted brioche, but his equally creative cashew butter and jelly (seen here) might also do the trick.