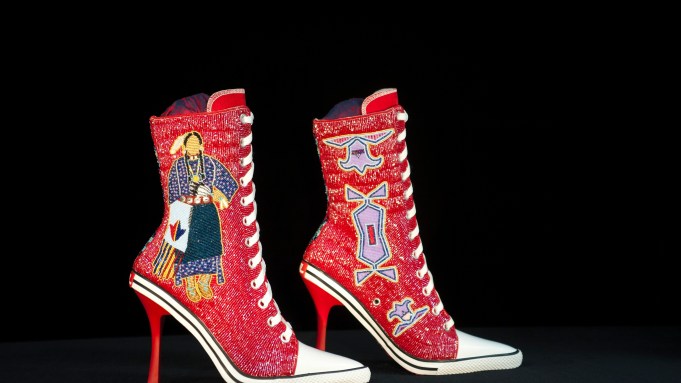 Crystal Bridges Museum of American Art is importing a slice of Seventh Avenue to Bentonville, Ark. On view from Sept. 10 to Jan. 30, the 11-year-old institution’s inaugural fashion exhibit, “Fashioning America: Grit to Glamour,” may as well be titled “refashioning America” given its broad, inclusive retelling of the nation’s sartorial narrative. Just as art museums are mining new blood, guest curator Michelle Tolini Finamore, formerly the Penny Vinik curator of fashion arts at the Museum of Fine Arts, Boston, stayed away from solo shows about the usual suspects who’ve had their moment.

“It’s impossible to tell the whole story, but it’s time to rethink our approach to American style and view American design through a new lens,” she said of including designers of color, ignored locales and an up-to-the-minute timeline of zeitgeists, celebrity culture, technology and socially conscious movements. “Since we go back over 200 years — the earliest piece dates to the 1790s — it was hard to find things by many of these people because they were persecuted.”

The process of whittling down her checklist to half its original size began with iconic and classic categories and pieces. Levi Strauss, Nike, Ralph Lauren, Vera Wang, Nudie Cohn, Halston, Carolina Herrera, Anna Sui, Christian Siriano and Lisa Perry are among the nearly 100 brands and designers represented. Finamore balances well-known names with the forgotten or nameless, literally in the case of an early 20th-century wedding gown by a Black dressmaker in Charleston, S.C.

“Her surname wasn’t recorded, which says so much about how much history has been lost and what we’re trying to accomplish through this exhibition,” said Finamore, who was happy to have the garment at least. “I would have loved to include a dress by Elizabeth Keckley, Mary Todd Lincoln’s dressmaker, but we could only find an image.”

Native American designers’ longer story was also difficult to tell. The exhibit’s pieces only go back to a ’50s cotton day dress by Lloyd Kiva New, whose teaching at the Institute of American Indian Arts in Santa Fe, New Mexico, overshadowed his fashion design career. Finamore said that despite his beautiful work being marginalized, his influence has a broader impact through his students like “Project Runway” contestant Patricia Michaels. The fashion industry’s progress regarding inclusion also comes forth in a contemporary outfit from Ginew, the first Native American-owned denim line, consisting of jeans, a T-shirt and jacket lined in an exclusive Pendleton [blanket] pattern.

From woke to Western, the sweeping overview is intended to reach a diverse audience. Some visitors may just want to take a trip down memory lane via a 10-gallon Stetson hat or “Hawaiian shirt monarch” Alfred Shaheen’s kitschy, retro, his-and-her honeymooner set. For streetwear aficionados, a dedicated section addresses the famous (Virgil Abloh’s Off-White, Missy Elliott’s jumpsuit by Tommy Hilfiger) and emerging (Olivia Anthony’s Livstreetwear). For the art crowd, sartorial-themed artworks from Crystal Bridges’ collection are incorporated. Both oil paintings, Jordan Casteel’s 2018 Ourlando is set in a store, while Robert Henri’s 1908 “Jessica Penn in Black With White Plumes” portrays the Broadway dancer in her finery. Henri’s work segues into garments for current stars of the stage, screen and cultural conversation: a strapless, ruffled gown from Calvin Klein (by Appointment by Raf Simons) worn by Rihanna, and the prototype of Michelle Obama’s 2009 inauguration ensemble by the late Isabel Toledo loaned by her husband and the exhibition’s design consultant Ruben Toledo.

Beyond museum collections and brands’ archives, Finamore relied heavily on her go-to private collections. Among Jimmy Raye’s numerous loaned items, she zeroed in on I. Miller shoes, since the New York company was America’s equivalent of Salvatore Ferragamo yet is mostly unknown today. An Adrian top and maxiskirt with a screen-printed, Surrealist-inspired cloud motif from Hamish Bowles’ private collection, another fundamental source for the exhibition, has neither been on public view, nor published.

“I’m excited about the mixture — not just clothing but the hats, fans and gloves — and multimedia in terms of art, a custom playlist and lots of video footage from the 1920s to today,” Finamore said.

“Like sneakers, which will be represented too, cowboy boots rise to the top as an iconic American design that’s both utilitarian and a form of personal expression,” Finamore said.

The exhibition’s complementary book edited by Finamore features chapters such as “Paris Fashions Americanized,” “Shaping the Standard Body” and “Hidden in the Seams” about a Dominican family’s immigration to Massachusetts. The museum partnered with the Council of Fashion Designers of America to host a fashion symposium on Oct. 26 and to award 10, $25,000 scholarships to student designers born in, studying in or residing in the American Heartland. (Applications and details launch January 2023 at CFDA.com.)

“Our upcoming fashion exhibition provides a meaningful backdrop to this announcement,” said Crystal Bridges board chairperson Olivia Walton, of boosting fashion communities in flyover states. “We are looking forward to leaning into the expertise and guidance of the CFDA as we work together to create more vibrant and creative economies.”

CFDA chief executive officer Steven Kolb said it’s the organization’s first regional-based scholarship and hopes it’s indicative of more to come. Noting that CFDA founder Eleanor Lambert hailed from the Heartland — Indiana, like Bill Blass — he said, “You create from what you know when you start in life, so we’re investing in other parts of the country to see how they dress and what they’re influenced by to reach a broader audience and bring people closer together.”