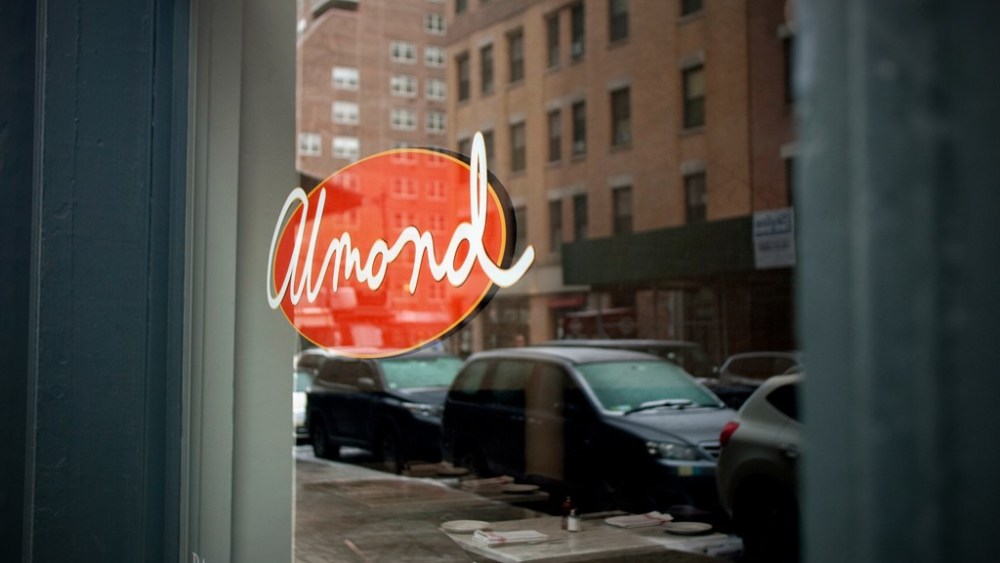 There are certain things that you won’t find at Almond TriBeCa, the third French-American bistro outpost from Eric Lemonides, Jason Weiner and Antonio Rappazzo.

You won’t find a hostess stand, nor gastronomic foam emulsions, nor complicated cocktails. And you definitely won’t find any of the bravado that typically accompanies three middle-aged dudes who have successfully steered a restaurant brand for more than a decade. “There’s nothing about our egos in this restaurant,” contends Lemonides, the front-of-house man who literally jumps for joy when showing off the space’s new amenities, like color-changing lights. “It’s not about us; it’s about making the people who are coming here feel comfortable.”

It’s a mandate Lemonides has followed since he and Weiner opened Almond Bridgehampton in 2001. Though it’s hard to stay humble given that regulars include Bradley Cooper, Joy Behar and Bill and Hillary Clinton, it’s actually the duo’s modest approach that has drawn such a crowd. “One of the reasons for our success in the Hamptons was that we brought it back to the basics. Everything out there was like, Nick & Toni’s $42 lamb chop, or Della Femina’s $39 linguini with clams,” says Lemonides, matter-of-factly. “Everything was so f—ing to the nth degree, and we came in and opened a French bistro with burgers on the menu for $16.”

Fast-forward 14 years, a second location on 22nd Street in Manhattan, and the addition of Rappazzo to the team, and Lemonides discovered another block in serious need of a neighborhood joint. “There are restaurants in TriBeCa that I absolutely love,” he says, “But there are very few really good, let’s-take-the-kids-and-go-get-something-to-eat places. Our bread and butter are the people who live up the block and are like, ‘come on, let’s go to Almond.’”

About a week before the restaurant is set to open, it seems like the locals are already buzzing. The brown construction paper masking the front window overlooking Franklin Street has been taken down, and passers-by peer past the signage (Weiner’s wife, Almond, scrolled her signature on the glass) into the 110-seat space. Tiles from the previous tenant, the restaurant Kutsher’s, delineate the bar area, which shifts to reclaimed wood flooring from a vendor in Bushwick for the dining room. A communal raw bar is made with Carrera marble tabletops. It’s all meant to feel largely unintentional, except for the bold zebra print on the back wall, which discerning guests will recognize as the Scalamandre wallpaper used at the now defunct Gino’s uptown, and as a backdrop for a brooding Gwyneth Paltrow in Wes Anderson’s “The Royal Tenenbaums.”

“The thing about walking into a restaurant that’s so bloody highly designed [is] you feel it,” Lemonides says. “And you love going there for a period of time, but they break in differently than homespun restaurants.”

Much of that homespun vibe also comes from the food, which executive chef Weiner (previously of Aqua and Charles in San Francisco) describes as “familiar but playing around with expectations.” Customers will find more elevated dishes and interesting plating techniques here than at Almond’s other locations. For example, a traditional lobster mousse is updated by stuffing it into a sausage casing and adding truffle and tarragon; lamb shoulder — though “extremely peasant cut,” says Weiner — is braised with classically African spices like harissa, cinnamon and cumin; chicken for two is served with a savory bread pudding and sweet-and-sour greens. “You need to be walking the line,” Weiner says. “It’s an occasion, going out to eat, but we don’t want to make it such an occasion here that you can’t do it a couple of times a month.” It should be noted that despite the fine dining appeal of these entrees, prices still fall mostly within the $15 to $30 sweet spot laid out at the other Almonds. For the most part, the chef prefers to let his ingredients, from Long Island suppliers like Amber Waves Farm and Paumanok Vineyards, do the talking.

When Almond TriBeCa opens next week, the kitchen plans to close promptly at 11 p.m., but Lemonides would never dream of kicking anyone out at the end of the night. “I don’t like to dictate anything to our customer. I don’t tell them when to come, when to leave or what to do when they’re here,” he says. “When people stop drinking and they want to go home, we’ll close the doors.”

Though late-night imbibers should take note: All three Almond branches feature a large wall clock with hands set permanently to 10 minutes before two o’clock. “It’s my witching hour,” he continues. “I’m a firm believer that if you’re out at two in the morning, you should go home. Nothing good ever happens after two.”