Feast for the Eye: Cherry Izakaya Opens in Brooklyn 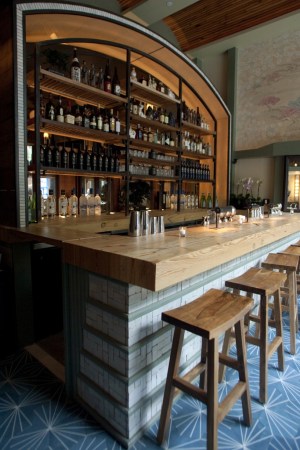 New Yorkers love a buzzy culinary trend (cronuts, anyone?). The latest craze that has the city’s food nerds swooning? Izakayas. Traditionally thought of as modest Japanese watering holes serving tapa-sized bites, izakayas have been popping up all over the city recently. Jonathan Morr and Eugene Morimoto’s new spot, Cherry Izakaya, opening Friday in Williamsburg, Brooklyn, is the latest.

“You know, if you had asked me a year ago if we’d ever open a place here,” Morr pauses, searching for the words… “I would have said, ‘I really don’t know much about Brooklyn…’” Morr is slumped in a cozy booth, fashioned out of reclaimed wood, upstairs at the restaurant on a recent Wednesday morning. “But I really love it here. We felt like we could do a place that was really Brooklyn. We tried to make it as true to the neighborhood as possible.”

The restaurant is a Brooklynized (read: haute hipster) version of Morr and Morimoto’s Cherry, the Japanese-French fusion hot spot tucked under the Dream Downtown hotel in the Meatpacking District. They used the more casual izakaya concept for the new place, though, they’ve taken liberties with the restaurant model.

“It’s all about the food here,” Morr says, noting that in classic izakayas, food is viewed as bar food, a booze-fueled afterthought meant to sop up the sake. “It’s our take on izakaya food. It’s traditional with a twist.”

Only a handful of the offerings on the expansive 50-item menu are borrowed from the Meatpacking locale — puffy gyoza stuffed with short rib and foie gras with a cherry glaze, a favorite of the first spot, is here. Chef Jun Hiroshima, who previously worked at Morr’s BondSt, mans the kitchen, whipping up his spin on the expected fare. Diners can slurp up pork ramen served in a brown butter miso with charred corn or chow down a black Caesar roll with grilled romaine and crispy bacon. The menu crafting process proved tedious.

“I’ve been tasting the food for close to six months, doing tweaks and perfecting everything,” Morr says. “I gained 25 pounds. I don’t want to see this food for a while, but it was worth it because I’m happy with every single dish.”