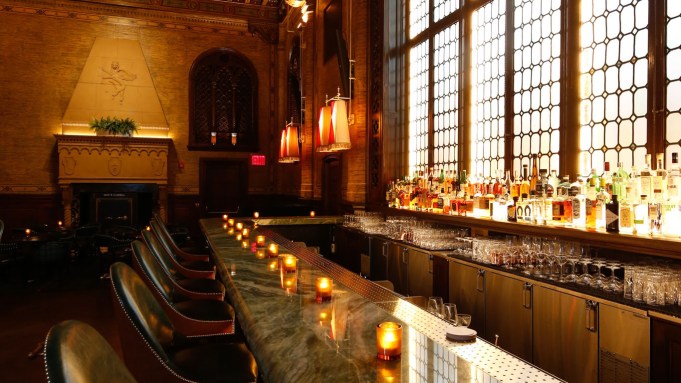 Scott Gerber, one of New York’s prime nightlife business owners, commutes in from Connecticut through Grand Central Station every day, and yet was only faintly familiar with one of the terminal’s most iconic corners, the Campbell Apartment.

“It was really hard to get a drink, it was always super crowded,” Gerber says.

After winning a legal battle against the bar’s former owner Mark Grossich, Gerber’s company Gerber Group, which is responsible for hotspots such as Irvington and, more recently, Mr. Purple, has reopened the famed cocktail bar as simply the Campbell.

Given the history, Gerber approached the project with an intention to keep as much the same as possible; the original safe and hand painted ceiling were just one of the many existing details left untouched. One notable change is the removal of the stiff dress code, which prevented many of those who did know about the tucked-away bar from partaking.

“I guess the prior owner wanted this to be a very formal place — his slogan was ‘cocktails from another era,’” Gerber says. “I don’t think people live like that anymore. We just wanted to relax it — it doesn’t mean that it’s a bunch of hipsters, it’s not like that. We just want it to be more inclusive.”

The bar is named for New York financier John Campbell, who lived with his wife up on Park Avenue, and leased the space “as a place to entertain their friends,” Gerber says. “The story goes that he used it as a private office in the Twenties.” He died in 1957, after which the space fell into a state of disrepair. It was briefly used as both a jail and a storage space for weapons, before becoming a bar in 1999.

When a real estate broker called Gerber in December 2015, he originally wasn’t interested; most of their properties are connected to hotels, and the procedural complexities of dealing with an MTA-owned location deterred him. Eventually, the history and charm of the property took hold, something now incorporated into the updated cocktail offering.

“The story goes that John Campbell has a butler whose name was Stackhouse, so we’re doing a rum punch called Stackhouse’s Punch,” Gerber says, over the faint announcement from inside the terminal. In addition to three different kinds of Negroni and Old Fashion cocktails respectively, “We’re also doing something called a Bullshot, with beef bouillon, celery salt, vodka and clam juice” — for the adventurous drinker in your group, one would assume.