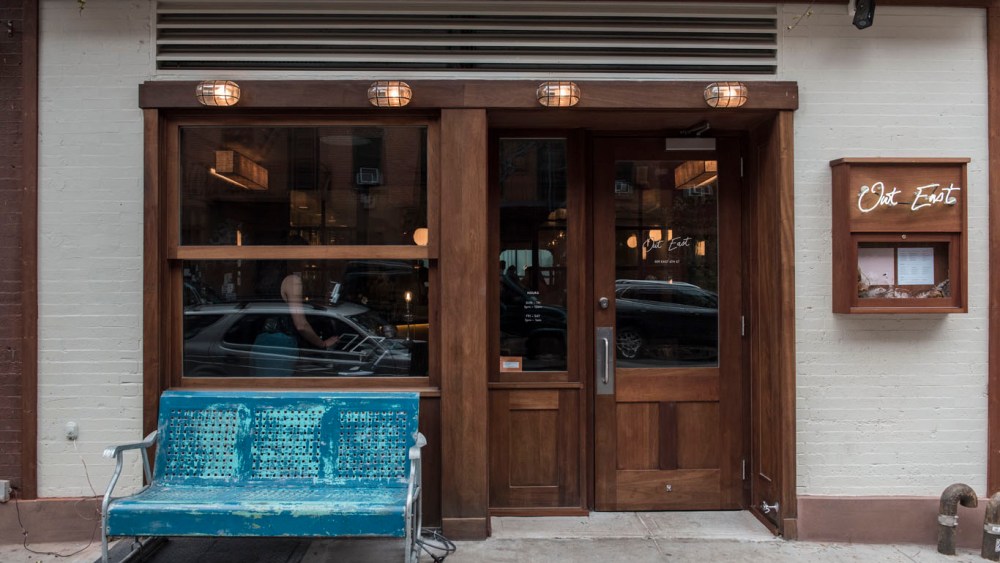 Ask just about any chef on the eve of opening their own space, and they’ll tell you it’s been the dream since they began their careers. But not so for Tim Meyers.

“I never really pictured myself having a restaurant,” the 29-year-old says, from a pink banquet inside Out East, which opens today. “It was never a goal of mine. I didn’t really have goals. I certainly don’t regret having it now, but I was never a big foodie and I was never really in love with cooking. I never liked working 14 hour days, so I was like ‘Well I guess the pinnacle of this profession would be to own a restaurant, but I don’t know if I’m really up for it. Turns out I am.”

Together with Peter Kane and Anthony Serignese, who serve as managing partners, Meyers is bringing Southern coastal French cooking with a “whimsical” twist to the East Village.

Meyers comes most recently from Charlie Bird, where he spent two years; his résumé includes Glasserie, Mas Farmhouse and Eleven Madison Park. All that is pretty impressive for someone who didn’t set out to have a career in food.

“I don’t really have a romantic story about it — I went to Bard College in the Hudson Valley, and was working on the weekends at a breakfast restaurant in the Berkshires,” says Meyers, who dropped out of high school and went to college at age 16. “I studied history and philosophy, and when I graduated I was like ‘I don’t really want to do anything with that’ — I looked at college as more of a way to inform the way I think and look at the world. But I realized I had started to really look forward to going to work on the weekend.”

Meyers then studied at the Culinary Institute of America for two years, which “reaffirmed my belief that this was something I could make money doing.” His interests in cooking have brought a seasonal menu of crudo and roasted meats/vegetables to Out East, which is named for Long Island (where much of their seafood comes from). But it’s French cooking that is more prevalent in the dishes.

“When I think about food, I think about ‘What are they serving in the Provence of my imagination?’” Meyers says — after all, he’s never been there, and that’s the way he likes it.

“I think that’s really important for me,” he says. “I don’t enjoy travel, but all through my childhood I imagine things. I have really romantic notions about what it is to go to the South of France. And I’m sure it’s great. But I can almost guarantee it’s not as nice as I think it is in my head.”