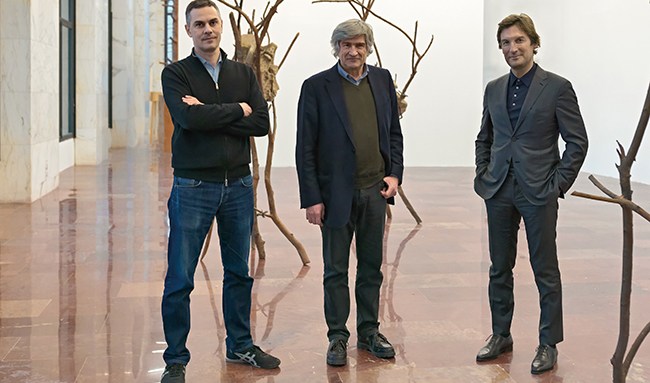 ROME — One could hardly imagine a space better suited to display Giuseppe Penone’s works than Fendi’s headquarters here at the Palazzo della Civiltà, or the “Square Colosseum.” The contemporary artist’s sculptures of jutting trees and marble blocks contrast with the precise geometry and monumental structure of the building, which dates back to 1937.

Fendi is holding an exhibition of Penone’s works called “Matrice,” named after one of the artist’s most spectacular works from 2015, a sculpture almost 99 feet long, in which the trunk of a fir tree has been carved out following one of its growth rings. A bronze mold has been cast in the wood, emphasizing Penone’s focus on the relationship between time, men’s intervention and Nature.

“The space required this kind of installation and vice versa,” said Fendi chairman and chief executive officer Pietro Beccari, who masterminded the exhibition. “Matrice” is preparatory to a work commissioned from Penone by Fendi, which will be installed in front of the brand’s store in central Rome in Largo Goldoni in the spring, as reported.

“I’ve always admired his work and I’m very proud of this project. Penone’s sculpture will bring added value to the location, to the city and to our store,” Beccari said.

Asked about the genesis of this sculpture, the executive said Penone’s inspiration was “instinctive” as the artist quickly jotted down a sketch while the two men were having lunch. Beccari noted that Penone “obviously” had complete freedom in the creation of the work. The artist has experimented with sculpture in urban spaces, with pieces installed in cities including Frankfurt and Kassel in Germany.

As reported, the sculpture Fendi will donate to the city will be one of Penone’s most complex. Two bronze trees, 18 by nine meters high, or 59 feet by 29.5 feet, will interlace their branches, lifting-up at 5 meters, or 16.4 feet, from the ground a sculpted marble block weighing 11 tons.

When Beccari spearheaded the move of Fendi’s headquarters to the Palazzo della Civiltà in 2015, his intention, in agreement with the city, was to dedicate the ground floor to exhibitions open to the public. After a private event scheduled for Thursday, “Matrice” will run from the following day until July 16.

A sculpture called “Abete [Fir Tree]” from 2013 is exhibited for the first time and stands outside the travertine building at the top of the imposing staircase. More than 65 feet high, its branches can be seen from Beccari’s office on the first floor.

“Palazzo della Civiltà Italiana is an extraordinary space under many aspects, because it represents a specific historical moment,” Penone said. “Also, I associate it to Giorgio de Chirico’s metaphysics, that is why I see it under a light and an idea of suspended space, that is in some way abstract compared to reality. Many years have passed since its construction, thus it is possible to perceive it under a different light. For me, all of this makes it, in any case, a very interesting space.”

Penone emphasized the relevance of the venue. “I visited the space of Palazzo della Civiltà Italiana and imagined what could work in that space,” the artist said.

Speaking of the “Matrice” sculpture, which occupies a whole nave, he said the tree is “divided in two parts, carved-out following a growth ring. It becomes a negative of the tree at a certain age: the future time of the present tree is absent.”

Penone is a key exponent of the Arte Povera, the Italian avant-garde movement from the Sixties and is a leading international contemporary artist.

Also, inside the building, the light that shines in through the large arches and windows changes the perception of the sculptures depending on the time of day.

“Ripetere il bosco [Repeating the forest],” created between 1969 and 2016, comprises a number of trunks excavated from wooden blocks and arranged to resemble a small forest, as in a fairy-tale landscape. “Foglie di Pietra [Leaves of Stone ],” from 2013, is shown in Italy for the first time and shows marble blocks carved into capitals and columns placed on spiraling trees and branches. It is almost impossible to detect whether the trees are organic and differentiate them from the bronze molds.

There are also other works, including a canvas reproducing details of the artist’s body through hundreds of acacia thorns; an impression of the artist’s body on a stack of myrtle leaves (always different in new locations), or the reproduction of a river-polished stone in a marble block, replicating the forces of nature. “Penone adds a natural and contemporary dimension to the abstract and geometric architecture of the space,” Beccari said.

This is only the latest step in Fendi’s support of the arts and culture and the emphasis on its Roman roots after the restoration of the Trevi Fountain, where the company held its Haute Fourrure show by Karl Lagerfeld in July, as well as the restoration and preservation of the Four Fountains of Gianicolo, Mosè, Ninfeo del Pincio and Peschiera.

Rome’s Gagosian Gallery will present Penone’s exhibition “Equivalenze,” to coincide with the show at Fendi’s headquarters, running Saturday to April 15.