The restaurant is run by Alex Kingman and executive chef Luis Jaramillo. 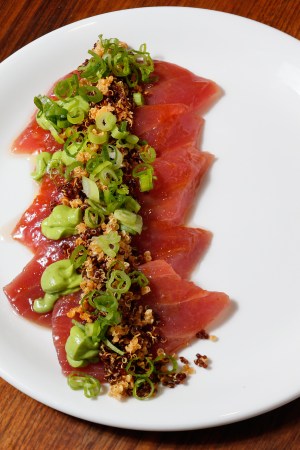 “The restaurant blood runs in the family,” said Alex Kingman, speaking from the serene dining room of Fifty a few days before the restaurant’s opening. The young restaurateur is behind West Village’s newest dining option located on Commerce Street, catty-corner to the off-Broadway Cherry Lane Theatre. Kingman’s family owned the former restaurant Alley’s End in Chelsea; he cut his teeth as a server at the nearby Tartine before enrolling in business school at New York University with the dream of opening his own space. A few months out from graduation, the 27-year-old is ready to tick that off the bucket list.

The project also runs particularly close to home for Kingman — downstairs from the apartment where he grew up, in fact.

“I’m kind of lucky that this spot would be available because I feel like this kind of place doesn’t turn over that often,” he explained. “This is a special place, for sure. All the history of restaurants — Grange Hall, The Blue Mill Tavern and, more recently, Commerce. It’s important to us to do justice to the history.” Fifty keeps some of the elements of the space’s past restaurant iterations — terrazzo flooring and tiling on the wall — but freshened up the dining room through a neutral gray and dark wood color scheme, marble bar and minimalist prints hanging on the walls.

The kitchen is run by executive chef Luis Jaramillo, who formerly worked at Blue Water Grill before joining Fifty as a partner. The team also includes beverage director Anna-Christina Cabrales and Darnell Holguin, a well-regarded mixologist formerly of Bathtub Gin who crafted the cocktail program for Fifty.

“It was kind of a nice timing,” said Kingsman, who became familiar with Jaramillo’s cooking through a series of dinners out at Blue Water Grill. “They closed for renovations, and he was thinking about the next project. He kind of fell in love with the space, and we went running from there. Everything has fallen in place nicely — kind of an organic growth to the whole project.”

The menu is “new American” with Latin flourishes, and seafood has a strong presence; Jaramillo culls inspiration for his cuisine from his childhood in Ecuador, where he spent much time in the kitchen with his mother before moving to New York at 17. “I came with a set palette of flavors. All of a sudden I landed in New York, and all of a sudden those flavors were blown up into different types of cooking, and different types of cultures,” Jaramillo explained. “This is the dream of everyone. This is the dream of every cook, to open your own kitchen and try to emulate, and try to create. [But] at the end of the day, it’s not cooking for myself. It’s cooking for whoever else is eating it.”