Presented by Tiffany & Co., the museum survey of contemporary art opened May 17.

After a bit of pre-opening drama — and continued protests and calls to remove Whitney Museum board member and vice chair Warren Kanders, after it was revealed that his company Safariland produces tear gas which has been used against migrants at the U.S.-Mexico border — the museum officially opened the doors to its Biennial showcase today in New York. Presented by Tiffany & Co., the exhibition highlights work from 75 working contemporary artists. Through painting, sculpture, video, photography, performance and installation, the artists featured explore topics touching upon identity, race, religion, gender, the environment and politics.

There’s plenty of time to take it all in — the show runs through Sept. 22. Here are a few emerging artists to look out for when you’re there.

Ragen Moss
The L.A.-based artist’s nested sculptures hang from the museum’s ceiling but appear almost as if they are suspended, and there is a certain balloon-quality about the work. Torso-sized, the painted sculptures integrate illustration and text, and various levels of surface opacity. Moss explores ideas of physical space in her work — a point which may be particularly underscored if you visit the museum on a busy weekend and have to jostle your way for a better peek inside each piece. 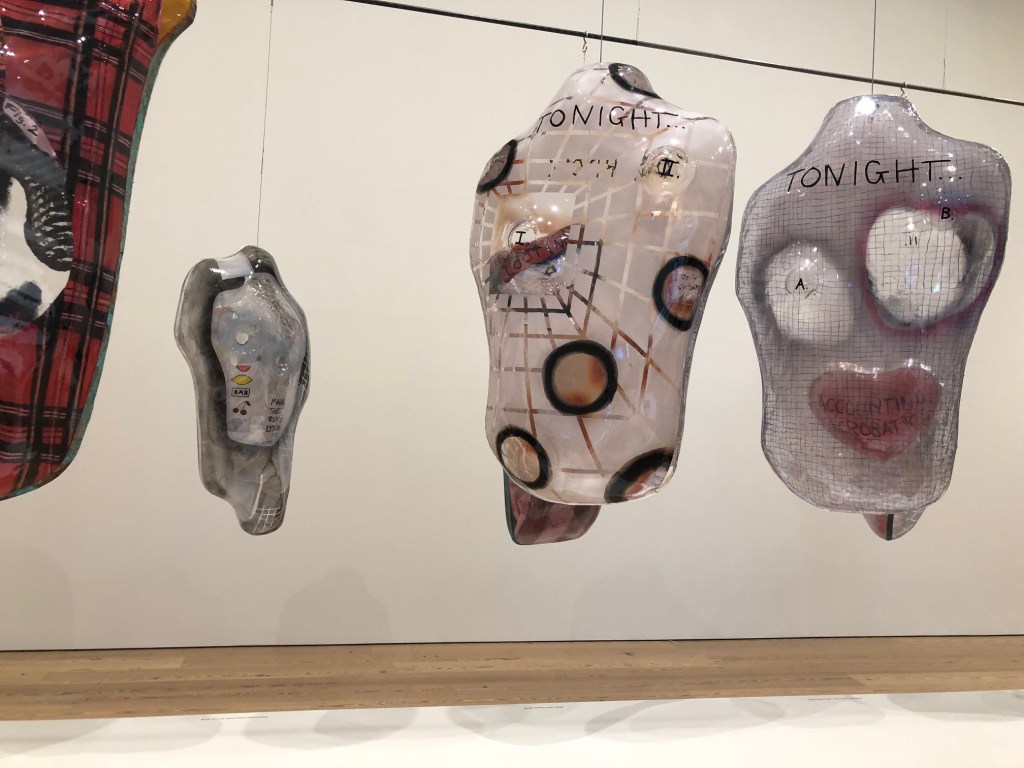 Christine Sun Kim
Kim often works with the medium of sound, and while there isn’t an audio element for her work on display at the Whitney, it’s still very much present. Pairing colloquialism with geometry, the 39-year-old L.A.-based artist presents the struggle of accessibility for people who, like her, are deaf, in everyday situations. Hung side-by-side, her three large charcoal and oil pastel works — “Degrees of My Deaf Rage in the Art World,” “Degrees of Deaf Rage While Traveling,” “Degrees of Deaf Rage Concerning Interpreters” — are a reminder that rage can be amplified through vehicles other than sound. 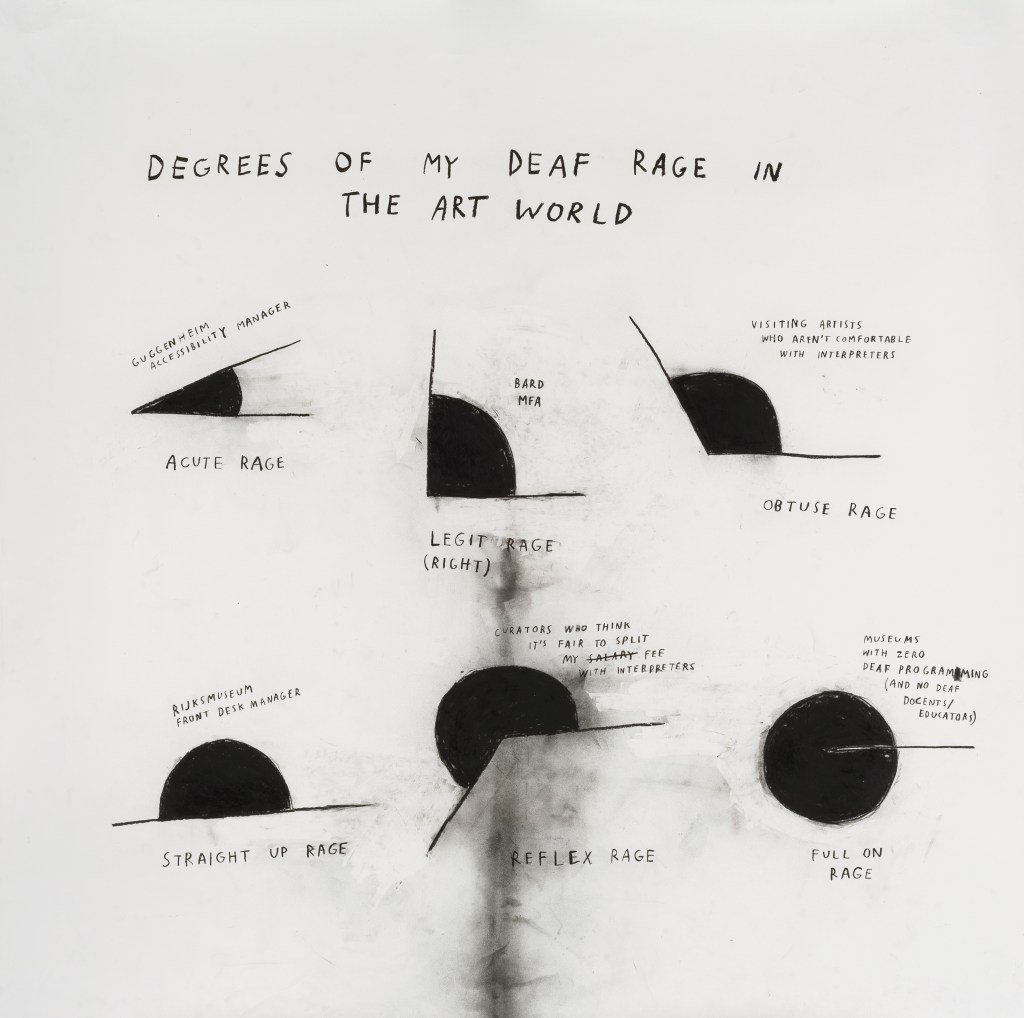 Alexandra Bell
The 36-year-old has made a name for herself by interrogating the power of language in media, and specifically how coverage can perpetuate racism and bias through sensationalized news coverage. For the Biennial, work from her series “No Humans Involved: After Sylvia Wynter” examines media coverage of the Central Park Five through a series of New York Daily News covers, with sections redacted or highlighted by the artist to underscore the racism in how the case was reported. Even President Donald Trump, circa 1989, makes an appearance; his full-page newspaper advertisement calling for the reinstatement of the death penalty is on display.

Martine Syms
The 31-year-old artist from L.A., whose work examines depictions of blackness in America, presents a multimedia installation — a wall painting, photo prints — in a corner of the museum’s seventh floor. But the central focus is her video art piece “Intro to Threat Modeling (2017),” presented on a large, rectangular, vertical screen situated within a raised orange table. Viewers watch from above, evocative of how much video content today is consumed — peering down at a rectangular phone. The artist uses screen grabs of text conversations, e-mails, and a digital avatar to piece together a map of personal security risks. 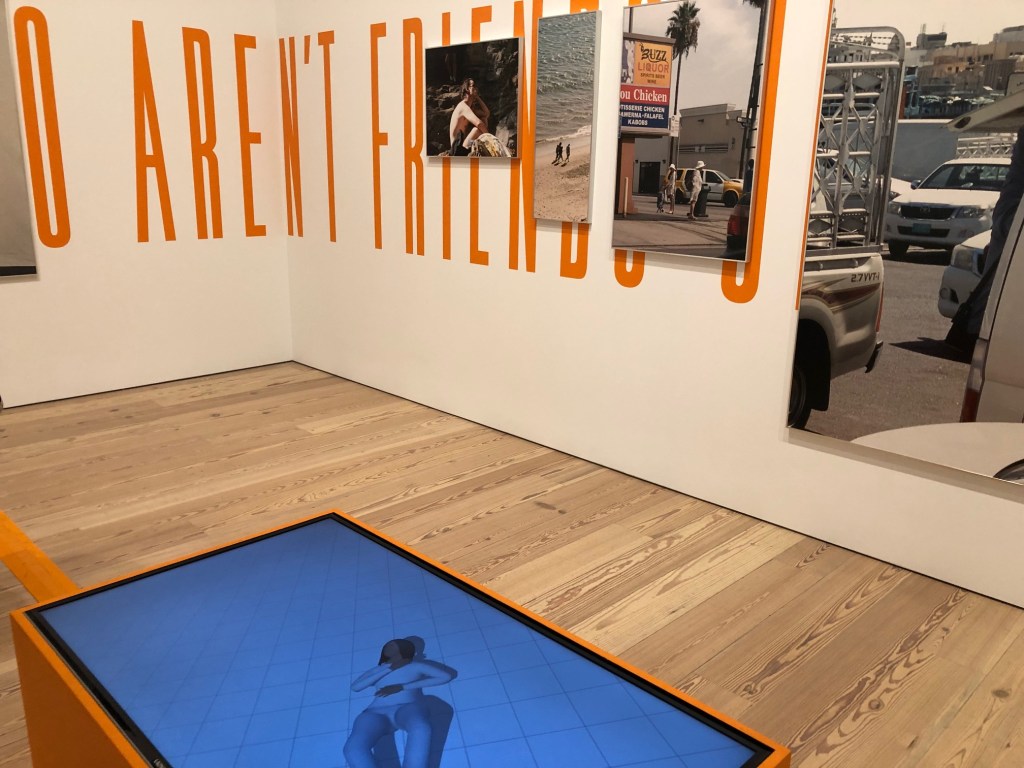 Agustina Woodgate
The 38-year-old Argentinian artist based in Miami and Amsterdam remarks on power and labor dynamics in her installation piece “National Times.” Composed of a row of clocks lined up on a wall, the piece stays synchronized due to its master/slave configuration — one digital clock, not visible, controls the whole lot. The hour and minute hands of each clock are outfitted with sandpaper, slowly shaving off the numbers from the faces as they continue to cycle through each day, eroding their function. Time to clock out! 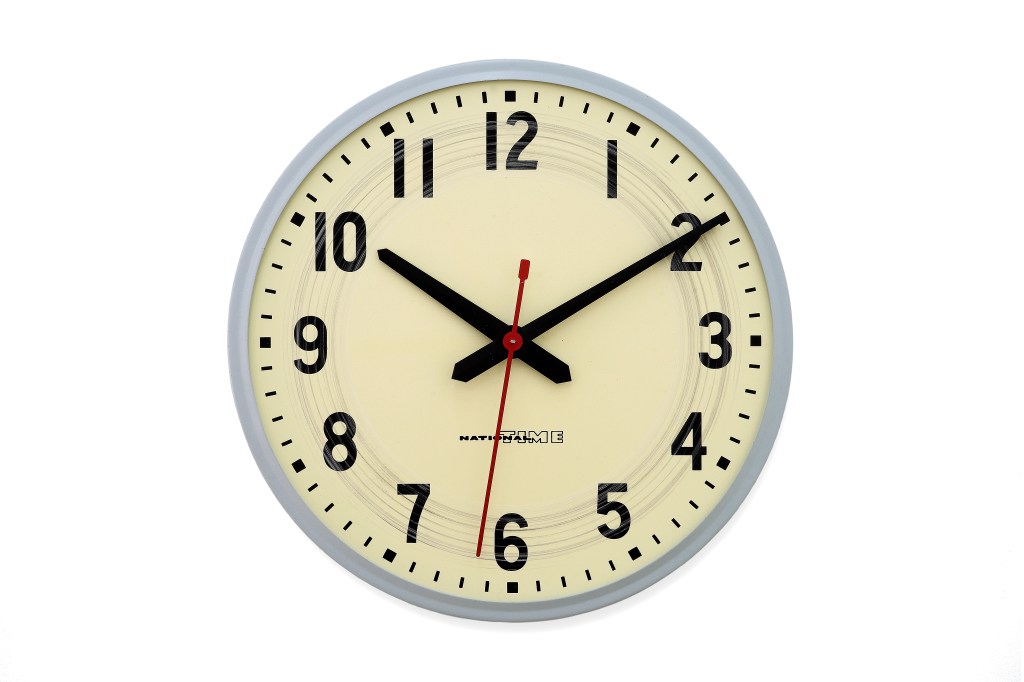