A guide to some new places for visitors to enjoy in the city, including places to eat, drink and stay. 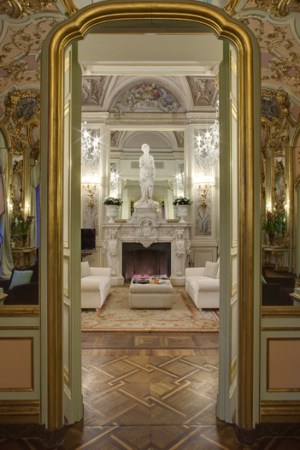 Buyers and exhibitors headed to Florence and tired of the “must-go-to” places needn’t worry. Even though the skyline has barely changed over the centuries, inside the city’s ancient walls, change is constant. On the banks of the Arno, for example, new bars and restaurants sprout up regularly. Here are some new places for visitors to enjoy in the city just like the Florentines.

In the late 19th century, when Florence was the capital of Italy, Baron Gustave Oppenheim decided to build a villa for his young wife on the hills behind the Boboli garden and piazzale Michelangelo, with an amazing view over the city. The baron hired the most famous artists of the time, who employed the most prestigious marbles of Carrara and Murano glass. Through the decades, Europe’s nobility attended parties held by the different owners, including Eugenia, the last empress of France, widow of Napoleon III. Luckily most of the original furniture and decorations have been preserved, so that when people walk into this new five-star hotel, it feels like being Oppenheim’s guest. Villa Cora offers 46 rooms and eight suites, with the imperial one dedicated to the Japanese emperor Hirohito, who sojourned here. Besides a bistro in the orangery next to the pool, the icing on the cake is the rooftop terrace with a breathtaking view.

Opened in December by Matteo Fantini and Nicolò Baretti, Io-Osteria Personale is one of the hottest new restaurants in town. Housed in a former butcher shop, it’s located in the heart of San Frediano, a neighborhood loved by Florentines but generally unknown to tourists.

“I have always felt intimidated by high-end restaurants, so we wanted to create a place where people could taste fine food in a comfortable setting,” said Fantini.

To that end, tables are made of raw wood while hanging on the white brickwork walls are blackboards explaining how the sophisticated dishes are made. Fantini personally chose the wines from all over Italy with the focus on Tuscan wineries, but shied away from expensive and famous labels, opting for smaller, unknown ones. Baretti created the menu based on local ingredients. A must-try is the chocolate soufflé served with tomato jam and basil sorbet.

For night owls, a good choice is to head to Logic for drinks. Stroll down Via de’ Macci, an alley on the side of Santa Croce’s church, until you see a bunch of people outside an anonymous door without any signs. Hard to find but worth to reach, Logic replaced Maramao, one of Florence’s most popular bars in the Nineties. It was opened in January by Bar Argentina and Gold, a local young brand and store that actively organizes cool events. They play all kind of electro music, from house-funky to drum and bass, which fit perfectly with the minimalist ambient.

The former workshop of the Bini brothers, two well-known artisans of hat blocks and other wooden objects, Volume still retains that old world charm, although it was transformed into a bookshop and a cafe with live music and art exhibitions. Walking into Volume is like entering an eccentric and artistic house filled with mismatched chairs, armchairs and stools, while bookshelves are filled with tomes and wooden objects. Located in the beautiful Santo Spirito square and close to the Ponte Vecchio, try its selection of crepes with good Tuscan wine.

A stone’s throw from the Duomo, the Boulangerie Del Rifrullo is halfway between a Parisian bistro and a New York cafe, but with a Florentine soul. Perfect for a quick but high-quality meal, in the morning it serves English or American breakfast, as well as the very Italian brioche-and-cappuccino alternative, or try the fresh baguette filled with local prosciutto and salami for lunch. Later in the afternoon, people can swing by for happy hour. It’s rustic and simple atmosphere, furnished with long wooden counters and tables, make it a ideal spot for locals and tourists.