"We aimed for nostalgia." 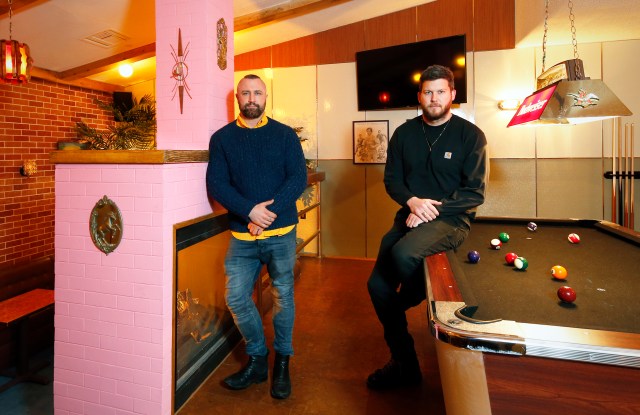 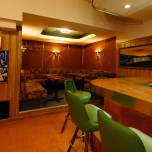 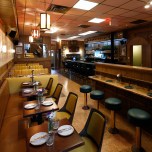 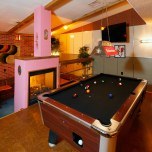 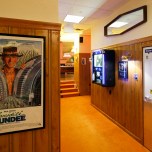 The Lower East Side’s newest bar and restaurant is hard to Google — and the name is potentially misleading. Flower Shop has opened the doors to its bilevel space on Eldridge Street below Delancey, but unlike its botanical name suggests, no bouquets are for sale, and the space’s vibe falls far from that of a florist’s cutting room. Instead, it’s the latest project from a team that includes hospitality veterans Ronnie Flynn, Dylan Hales and Will Tisch.

The restaurant is emulating the worn-in feel of a longtime watering hole. Upstairs, the space is geared more toward dinner service, while the basement takes a casual lounge approach with tongue-in-cheek detailing. “We aimed for nostalgia, and then it evolved into what it is,” says Flynn. The carpeted pre-fab space is decked with tchotchkes — a framed Backstreet Boys CD  cover; a 1986 “Crocodile Dundee” movie poster — as well as a salmon-pink fireplace and pool table situated under an old Budwesier pendant lamp. “We went to Austin, Tex., to this huge flea market called Roundtop,” Flynn continues to explain. “We found out later when we got there that people like Ralph Lauren, all their merch guys go down and bring a team of like 30 people. We were walking around like, ‘Where are we?'”

One may have a similar reaction upon setting foot in Flower Shop, which is likely to draw from the area’s bustling nightlife crowds. Upstairs, the dining room features wallpaper with racy illustrations done by a friend of the team, which provides a playful backdrop for executive chef Michael Hamilton’s food. Prior to opening, the chef was excited to show off his custom-built kitchen, which includes a hibachi grill and smoker, which will allow him to make pastrami, bacon and smoked fish in-house. “It’s a great platform for research and development,” he says.

The chef has resided in New York for the last 12 years, working for restaurants such as The Black Pig and Daniel Boulud. He designed the menu at Flower Shop with the mentality of “something for everyone,” without being pegged to a specific style of cuisine. What that translates to is a mix of pub food alongside more composed dishes, many with an Asian influence, as well as a special side menu with a pasture-raised, sustainable peg; the restaurant will work with local farms as well as Long Island supplier Dock to Dish.

“There’s something in there for the food nerd, there’s something in there for someone who just wants to come down and chug a beer and eat chicken wings, for someone who wants to come in three or four days a week,” Hamilton continues to explain. “It’s approachable; it’s unpretentious. The last 12 years have honed my vision into what I think New York needs to have, which is something for everyone.”