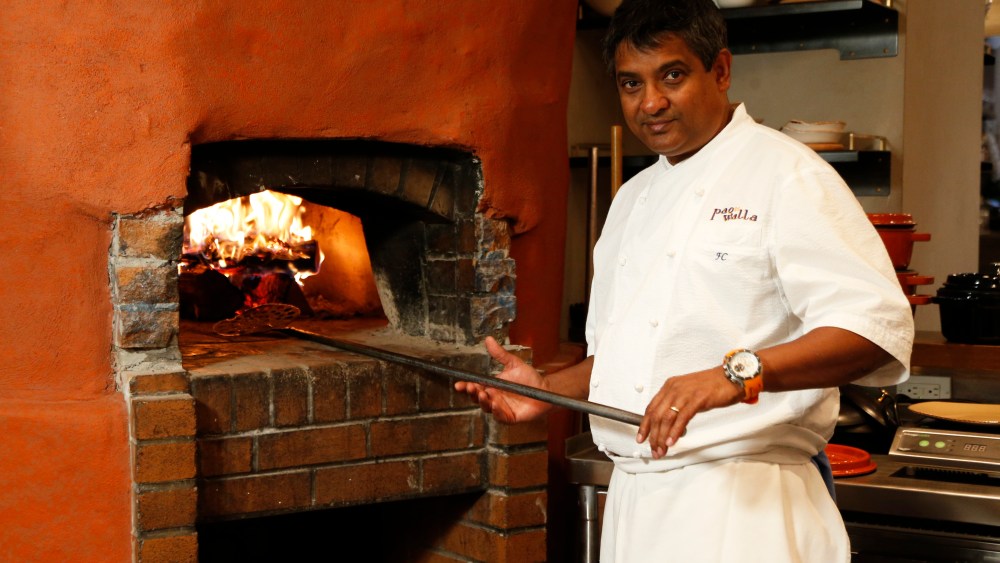 Floyd Cardoz’s new restaurant Paowalla is bringing his New York cooking career full circle. When he moved to America in 1988, his first job was cooking at a restaurant on 108th Street and Broadway. For his latest restaurant, he’s opening in a corner space on Spring Street that was previously occupied by Mezzogiorno — which has relocated uptown into the same space where Cardoz got his start in New York. “It’s kind of strange that we kind of traded places,” Cardoz mused a few days before opening, recounting the serendipitous real estate switch.

Cardoz, a “Top Chef” alum, is returning to the scene following the 2010 closure of his restaurant Tabla, an upscale Indian option that lived under the Danny Meyer empire. “I didn’t really want to do Tabla again,” Cardoz explained. “That was a great restaurant, but it was a restaurant of its time.”

Six years later, Paowalla is taking a more casual approach. “I just looked at the way I dined, and I love fancy sit-down — very formal dining — but I found that I choose, more often than not, to eat this way than a formal place,” he explained. “I said if me, the chef, wants to eat this way, I bet there’s a fair amount of people who want to eat that way too.”

Cardoz is hoping to introduce his diners to authentic Indian cuisine — so don’t expect to find the standard dishes of Curry Row on East 6th Street on the tables at Paowalla. “I want to demystify what Indian food is. There are a fair amount of people who are still very afraid of the cuisine. When you open up a restaurant, you want to open up windows to let more people come in,” explained the chef, who added that he didn’t personally try naan, a standard Americanized Indian food, until he was 19 years old. “Restaurant Indian food is not the way most Indians eat. If you ask any Indian, ‘Where do you get the best Indian food?,’ nine times out of 10 they’ll tell you ‘In my home.'”

That home-cooking approach is reflected in both the menu and dining room at Paowalla. Cardoz has looked to familiar recipes from Goa, where his grandmother lived, but his dishes cull inspiration from the many regional cuisines that make up his home country — stuffed calamari, whole fish stuffed with spices and vinegar, pork ribs stacked high — “It’s being a little playful,” Cardoz explains of his menu. And the restaurant, of course, serves Paowalla, a Goan bread, which is baked in the restaurant’s wood-burning oven. A few fan favorites from Tabla have also made their way over — chicken tikka; cheese kulcha at the request of NoMad owner Will Guidara.

The bright yellow exterior of the restaurant and tiled styling of the restaurant’s name reflect his grandmother’s home — most Goan houses display the family name in similar tiling. Inside, Cardoz kept the original flooring from Mezzogiorno, because the color reminded him of the floor in his grandmother’s house. The restaurant’s menus are presented in file folders, a playful reference that he hopes won’t be lost on many of his diners. “In India, every single government office you go to, they pull out these files. If you go to the doctor’s office, they give you these files,” he explained. “Everything I’m doing, I’m doing it for a reason. This restaurant is supposed to feel like home.”

Cardoz looked around at many other spaces below 30th Street and North of Canal before finding a suitable home for Paowalla in SoHo. “I just found that this spot of town was a great mix of locals, great mix of tourists and there are some businesses. It was everything I wanted,” he said, and also pointed out that the area was in need of Indian dining options.

While Cardoz built a successful restaurant in Bombay, The Bombay Canteen, during his sabbatical from New York, he doesn’t have plans to move back there — he’s already home. “New York is home for me,” said the soft-spoken chef. “I think it’s a city of savvy people who enjoy eating out a lot. And for a chef, it’s the best place to be.”