Miuccia Prada and her husband Patrizio Bertelli, presidents of the foundation, will officially unveil the new Torre [tower] on April 20, during Milan’s international furniture and design trade show Salone del Mobile. The Milan headquarters of Fondazione Prada, which was established in 1993, is a complex comprising seven existing buildings recovered from a distillery dating back to 1916 and three new structures, including Torre, all located in Largo Isarco, in the southern part of Milan, and designed by Rem Koolhaas, with Chris van Duijn and Federico Pompignoli, from his Rotterdam-based architecture firm OMA. While the location was first unveiled in May 2015, Torre was the last building to be finished, although Prada held her fall show in February in this new space.

Covering nine stories and around 21,600 square feet, Torre has changed the city’s skyline with its almost 200-foot-high white concrete structure. Its rectangular plan is constructed on a wedge-shaped site.

“The intention from the beginning was to make a combination of existing and new buildings, creating a sequence of spaces that was very varied, that could be small or very big, have an intimate feel, or be fresh and neutral,” explained Koolhaas, as he toured the tower during a preview on Wednesday. The architect, who has collaborated on several projects with Prada, including the brand’s Epicenter stores in New York and Los Angeles, emphasized how the tower, with its unique structure, offers variations on the views of the city and original perceptions on each floor through the combination of three spatial parameters: size, height and orientation. Half of the levels are developed on a rectangular floor plan, while the other half are based on a trapezoid one. The height of the ceilings increases from the bottom and upward, varying from 8.8 feet to 26.2 feet on the top level.

“Each floor is taller than the other, at first compressed in space, then higher as you go along,” Koolhaas observed. “The compression has a direct effect on the works and collections. The effect of space on art — that was in a certain way the whole point of the whole foundation, to create a situation where it’s not necessarily that architecture serves art but it’s about the interaction between the two.”

Inside, the white cement is treated with white marble dust, contrasting with plywood walls, and concrete alternates with glass on the façades. Koolhaas said the marble in the panoramic lift was doused in red paint, which contributed to the pop, pink blotted effect. The lift is integrated in an inclined structure made of iron and concrete.

Depending on the viewer’s observation point, given the irregular geometry of the tower, the building has a different appearance. “By introducing so many spatial variables, the complexity of the architecture will promote an unstable, open programming,” said Koolhaas. 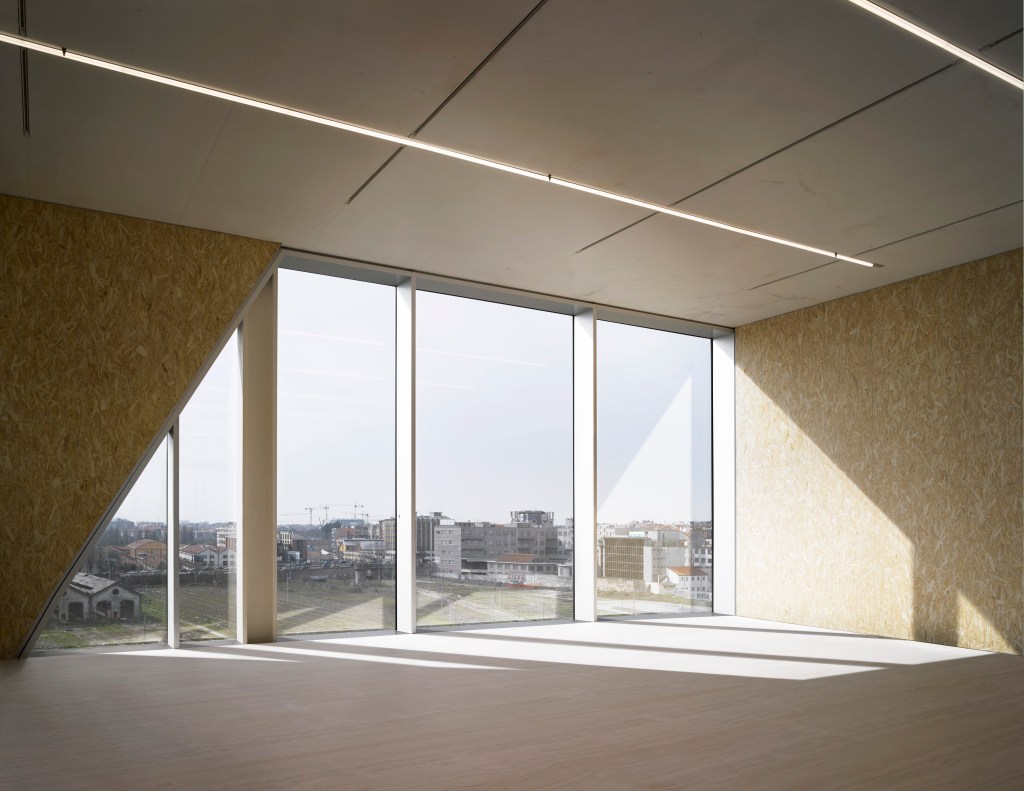 At the Fondazione Prada Torre, Miuccia Prada and artistic and scientific superintendent Germano Celant developed the “Atlas” permanent exhibition for the Tower, displaying works created from 1960 to 2016. Some of the standouts include: On the first exhibition space on the second floor, Jeff Koons’ painted “Tulips” in stainless steel juxtaposed with the colorful Carla Accardi varnish on sicofoil or sicofoil on wood works; on the next level, Walter de Maria’s “Bel Air Trilogy” of three 1955 Chevrolet Bel Air two-tone hardtops perforated by geometrical stainless steel rods; on the fourth floor, Mona Hatoum’s “Pin Carpet,” made with stainless steel pins, and the disquieting “Remains of the Day” wire mesh and wood home interiors elements ranging from a bed and a table to chairs and toys that look charred. Up higher, on the eighth floor, Damien Hirst’s installation “Waiting for Inspiration (Red and Blue)” from 1994 is a giant glass and steel structure with flies — some alive, some dead- and maggots, complete with sugar cubes in bowls, opposite William N. Copley’s paintings of nude couples. On the ninth floor, Carsten Höller’s “Upside Down Mushroom Room” needs a space of its own with its giant red and white rotating sprouts hanging from the ceiling.

The Torre restaurant, located on the sixth floor, will be opened over the next few days and features original pieces from the Four Seasons Restaurant in New York, designed by Philip Johnson in 1958, and sculptures by Lucio Fontana — in addition to a bar and a breathtaking view of the city — which is also afforded by the 1,728-square-foot panoramic terrace with a rooftop bar.

Prada and Bertelli invited a group of artists and architects ranging from Hirst and Höller to Mariko Mori, Francesco Vezzoli, Thomas Demand and David Chipperfield to a private dinner event on Wednesday evening to mark the opening of the tower.