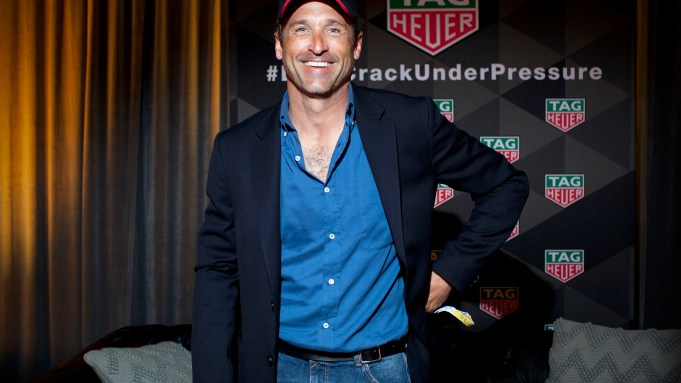 Patrick Dempsey is making his way down to the track at the Formula E race, with just 15 minutes to go before showtime. The usually sleepy Red Hook pier is unrecognizable, as the electric car race, which bills itself as “the future of racing,” is taking place among weaving, man-made bridges, bleachers and tons of branding from companies that sponsored and participated in the event. And yes, McDreamy is going for a test drive.

As he walks, Dempsey recalls his early memories of racing, saying that the Indy 500 was a big deal in his household growing up.

The fairly new Formula E race — it’s just four years old — has naturally drawn comparisons to Formula One and the Indy 500, and has received some criticisms from members of the motorsports industry. Dempsey, though, notes that complaints concerning the slow speeds of the electric cars and the silence with which they move are moot points.

“I think people need to get in the car and drive,” he says. “Certainly, [electric race cars are] a change that people aren’t quite used to yet. With that, there’s always going to be resistance, but unfortunately, the train has left the station.”

Dempsey is attending with Tag Heuer, for which he is an ambassador. The actor, who is now part owner of a Porsche racing team, first got into racing the year after his rom-com with Reese Witherspoon, “Sweet Home Alabama,” was released. Over the next 12 months, he had a hard time landing another acting gig, and his wife, Jillian Dempsey, wanted to get him off the couch. She encouraged him to pursue his lifelong dream of becoming a race car driver, and he enrolled at the Panoz Racing School.

Down on the track, drivers including Panasonic Jaguar Racing’s Mitch Evans and Audi’s Daniel Abt pose for photographs alongside their respective cars. Abt, whose team ends up winning the World Championship trophy, hams it up for the cameras, giving his girlfriend a huge kiss on the lips while eager photographers snap away. Liv Tyler also tries her hand behind the wheel, almost skidding out around a turn and shifting the car’s tail at a 45-degree angle before continuing along the track.

Dempsey, who recently did a capsule collection for fashion brand Bleusalt, said he’s “talking to someone” about another collaboration, but declined to reveal who it is. “I can’t say yet,” he says. “I’m still working on it. But I will say I think there’s an opportunity in men’s wear.”

He then waves goodbye and disappears into the hull of a race car to perform a few demonstration laps in an e-car before the race.

All Aglow at the Parrish Museum Midsummer Benefit