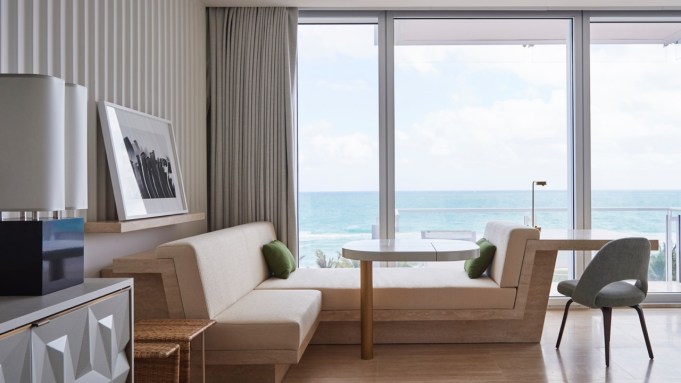 The Surf Club is trying to regain some of the pizzazz from its early years. Founded in 1930 by Harvey Firestone (of tire fame), the Northern Miami Beach membership club drew glitzy personalities from Elizabeth Taylor and Frank Sinatra to Grace Kelly and Winston Churchill during its midcentury heyday. Its ocean views provided fodder for Churchill, who was documented painting a seascape at the club in 1946.

“When I first looked at acquiring the club, the early vision was, how can I keep the club preserved and make it the nucleus of the project?” says property owner Nadim Ashi, chief executive officer of Miami-based real estate development firm Fort Partners. After five years of planning and three years of renovations, the Four Seasons Hotel at The Surf Club has opened its doors in the Surfside neighborhood of Miami Beach, located  just south of Bal Harbour.

Ashi added a hotel component to the mix of private residences as a way to build and service a sustainable real estate ecosystem; he brought in Four Seasons as a partner to operate the hotel and manage the condominiums. The property includes a spa and two restaurants, one of which will be American chef Thomas Keller’s first Miami eatery, set to open in 2018. “It’s one of those things where it took him a while to really feel comfortable with the Miami market, and that we saw the same vision,” Ashi says, noting that he pursued the revered chef of Per Se and French Laundry before convincing him to sign on to the project. Italian restaurant Le Sirenuse will complement Keller’s American cuisine.

Rounding up an impressive roster of collaborators — which in addition to Keller includes Pritzker Prize-winning architect Richard Meier, who designed the hotel and condos, and interior designer Joseph Dirand — was Ashi’s goal as he eyed the top end of the market; private condos for sale at The Surf Club begin just shy of the $4 million mark and go upward into the double digits. The property sits on almost 9 acres of Atlantic oceanfront, which The Surf Club takes advantage of, outfitting its private beach with cabanas. “Historically, that’s where a lot of the parties and activities [were],” Ashi notes.

Recruiting up who he considers the “best of the best” for the project might prove to be a point of differentiation in a landscape of real estate projects popping up throughout Miami Beach. “It’s very hard to compete when you bring the Four Seasons, to Thomas Keller, to great design,” he explains. “We were blessed with land that is pretty incredible when it comes to size, and we feel blessed that we were able to layer all of these operators on it.”

He stresses that his focus is on developing and delivering his vision. “I focus on a vision and strategy, [and] I just focus on executing it,” he says. “If you deliver the highest level service and property, there’s always a few buyers for it that are coming and buying. I’m not concerned about what’s happening in today’s market, yet. You always wait up and say let’s hope things continue. The market has suffered a lot the last year, year and a half, but we’ve seen huge activity in the last two or three months with the stock markets the way they are. The people feel richer and happier, so we’ve seen a lot more activity, but again — I don’t focus [on that].”

Ashi is also working on a major renovation of Four Seasons in Palm Beach — they recently finished the design phase and will soon begin building — and announced a Four Seasons project in Fort Lauderdale, located halfway between Palm Beach and Miami. “It’s very attractive for Four Seasons brand to be on the beach and in Florida,” Ashi adds.