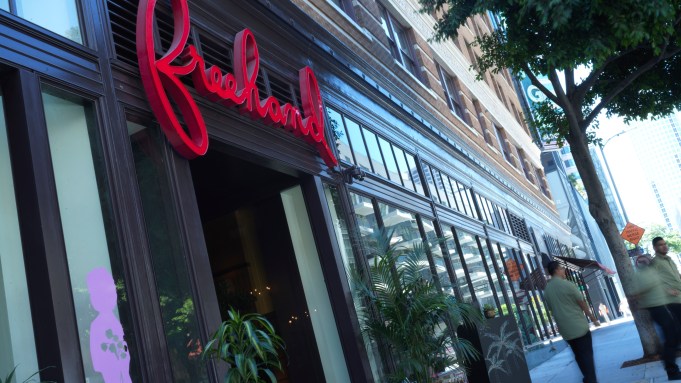 The Freehand hotel brand, known for its chic hostel-inspired community vibe, has ventured West, expanding into the luxury space with the addition of private rooms and suites, doormen and room service and the continuation of chic design by Roman and Williams and top-notch food & beverage by Bar Lab.

The hotel is another boon to the revitalized downtown Los Angeles, with extensive public spaces that include a street-level restaurant; a rooftop pool and lounge, which will be home to the award-winning Broken Shaker, and a spacious, cozy lobby area with salon-style cocktail service, a to-go coffee bar by Café Integral, a travel kiosk, and a concept store by Venice’s Flowerboy Project.

“The most important thing we wanted to translate from Freehand’s roots in Miami and Chicago is the culture of community and sense of sharing. You want to meet the other people who are staying there,” said Andrew Zobler, chief executive officer and co founder of Sydell Group (with Ron Burkle), creators of the Freehand and NoMad hotels.

Housed in the historic Commercial Exchange building in downtown Los Angeles, the 226-room hotel offers 167 private accommodations in addition to 59 shared rooms, ranging from a spacious corner suite to a “Super 8” bunk room. Similar to rooms at the Freehands in Miami and Chicago, Freehand worked with local manufacturers and artisans to create custom furniture and decorative elements with a focus on the American craftsman aesthetic. A colorful mural by L.A. art collective Cyrcle adorns the building’s light well, and amenities including toiletries by Argan, a minibar with some local snacks and gifts, bathrobes, slippers and personalized canvas totes add to the Freehand L.A.’s experience.

“To me, when you go to downtown L.A., a lot of hotels are trying to import ideas from other places of what is cool and urban. We wanted this to feel like California,” said Zobler, whose grandmother’s name was Sydell. She was an antiques dealer and interior designer, and Zobler worked in her shop as a boy and later traveled through Europe developing a sense of aesthetics and a fondness for found objects and original architecture.

Developed by Rudolph Rosenberg in 1924, the Commercial Exchange building is where local businesses such as the Owl Drug Company had its first retail drugstore, and where Edgar Rice Burroughs, the creator of “Tarzan,” had his publishing headquarters. Roman and Williams kept many of the building’s original architectural features, such as a vaulted two-story ceiling, the tiled elevator vestibule and marble staircase (a mosaic owl from the floor of the original drugstore remains, too), and layered them with modern handcrafted furnishings, vibrant tapestries, earthy decorative elements and murals by local artists, giving Freehand L.A. a relaxed, California-oasis vibe in a bustling, urban setting. Miami’s pastel color scheme has been traded for a mustard, eggplant and teal palette.

Its restaurant, The Exchange, pays homage to the restored 12-story blade sign (the largest in L.A.) under which its street-level entrance sits. Bar Lab duo Gabe Orta and Elad Zvi teamed up with native Angeleno chef Alex Chang to create a menu through an Israeli lens – incorporating flavors and practices from Chang’s Asian and Mexican heritage, with a strong focus on local produce.

Outfitted with communal tables to mimic the menu’s shared format, Exchange’s interiors are inspired by the outdoors – with plants and terrariums tucked throughout the two-story restaurant in a nod to the California desert.

Come August, Bar Lab will open the popular Broken Shaker bar on the hotel’s rooftop, surrounding a new, large swimming pool. Similar to the Miami outpost, the West Coast iteration will be a departure from city nightlife with lush greenery, vintage furniture, and a laid-back vibe. Known for marrying playful, hand-crafted cocktails with hospitality, Broken Shaker has been nominated for two James Beard awards and named one of the “The World’s 50 Best Bars” in 2014, 2015 and 2016.

“A lot of people think, ‘How do I do something that will appeal to the most people?’ We don’t think about it that way. It’s akin to how fashion designers make things. Not everyone will like it, but there’s a certain group of people who will be passionate about it and will tell their friends,” said Zobler, who noted that the reason he fell in love with the hostel concept was not design or price point.

“It was the communal in way people view the world, how to explore the city, what to do that day. I never had more fun than when I shared a beach house with 10 other people in my 20s. I wanted to take that now-romantic idea and translate it into a hotel.”

It will be a busy next 12 months for Sydell Group. The Line hotel in Washington, D.C., a 220-room new build attached to a 110-year-old church, will open in August. After that comes NoMad L.A., one block away from Freehand L.A., at the end of the year. Freehand N.Y. will open in the first quarter of 2018, and in March a venture with MGM in Las Vegas called Park MGM will open in the old Monte Carlo hotel, where the top three floors will be a NoMad.

Said Zobler, who used to work for Barry Sternlicht of Starwood Group and also put together hotel property deals with André Balazs, “I would love to bring NoMad and Freeland to London. But first I need a vacation.”