After the Legion of Honour ceremony, Jacqueline de Ribes hosted a celebratory dinner.

An orator extraordinaire, the politician coaxed many tears during his 20-minute speech, praising the American designer’s “timeless elegance,” family values, and a style that has “the perfume of eternity” before pinning the red medallion signifying Lauren’s latest award of merit from the French state: Officer of the Legion of Honour.

Plenty of bold-faced names roamed the gilded halls of the presidential palace that night, for legendary French actor Jean-Paul Belmondo and film director Robert Hossein were also decorated. These included the dashing Jean Dujardin, who won the Oscar for best actor in 2011 for silent movie “The Artist.”

Among those who came to cheer Lauren was Nathalie Rykiel, who related that her late mother, Sonia Rykiel, slept only in Ralph Lauren bedding, and that she sometimes dons cashmere sweaters from Polo. “He is so faithful to himself, to an image, to a country, and what he believes in,” she enthused.

Rykiel let slip she was heading to New York next month to speak at a FIAF French Institute Alliance Française event in New York. She’s also finishing up her second book. “It will be published in March and it’s still a secret,” she demurred. 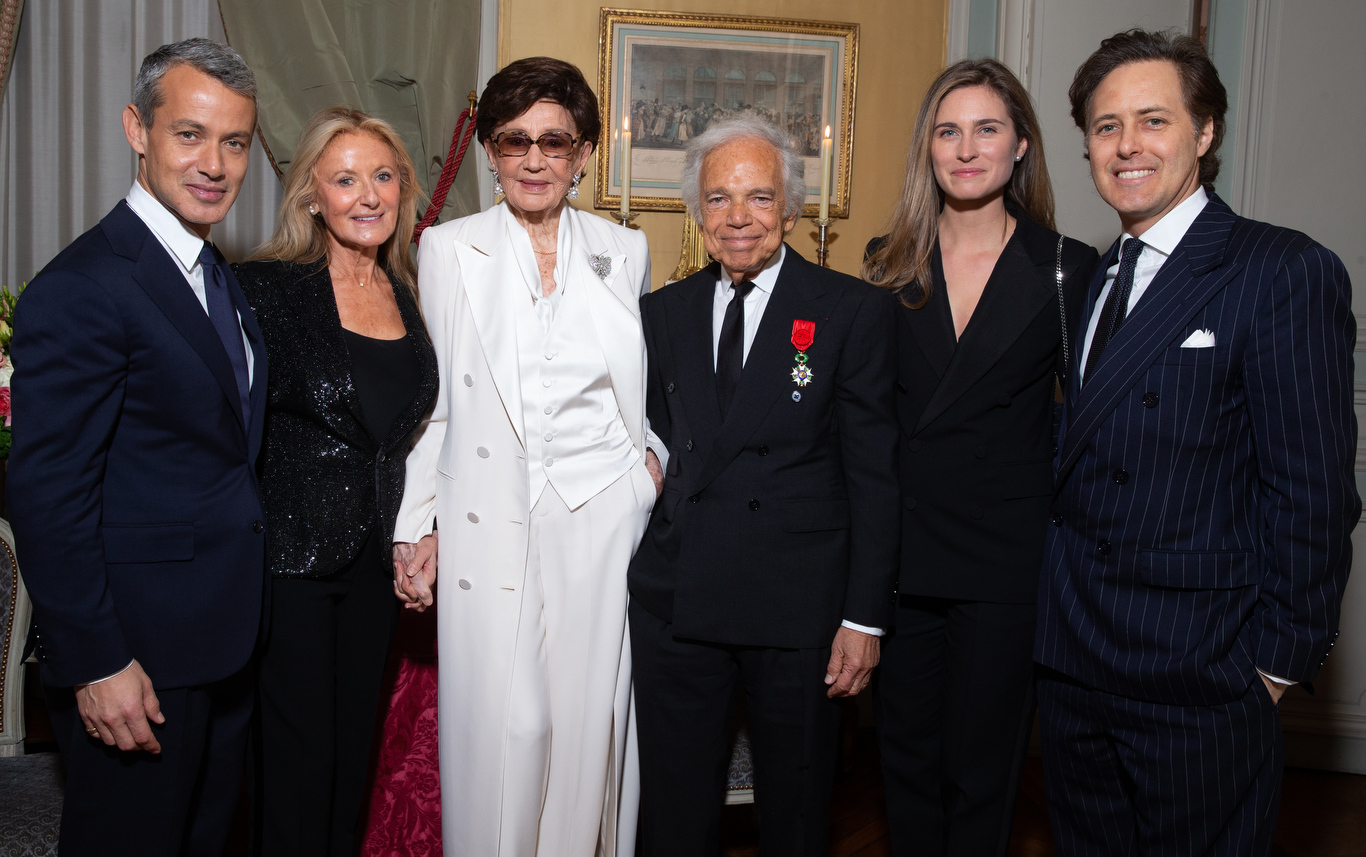 Antoine Arnault was keeping a close eye on his smartphone as his partner Natalia Vodianova was running late from a Guerlain photo shoot. “She’s either in front of the camera or on the motorcycle taxi,” he said.

Arnault spent some of his formative years living in Larchmont, New York, and Manhattan, and the Ralph Lauren lifestyle, with its associations of equestrian sports and sailing, seeped into him.

“I always wear Ralph Lauren when I play tennis,” he said.

“He gave an image so strong of a certain style,” interior designer Jacques Grange enthused about Lauren. “Plus he’s a charming man. There’s not so many people who are stylish. I love his curiosity, his openness. He’s not selfish.”

Grange recently completed his first Cheval Blanc hotel, slated to open soon in St. Barths. “Beachy,” is how he described it. “Exactly like a chic cabana in Portugal.”

After photo ops and a glass of Champagne, Lauren and his extended family repaired to the magnificent Paris mansion of Countess Jacqueline de Ribes, who resembled a tall dinner candle with her ramrod posture and sleek white ensemble, a vest and pants of her own design under a narrow Ralph Lauren coat.

After a sumptuous buffet supper amid towering floral arrangements, de Ribes took to the mic and proved herself as compelling a speaker as Macron. 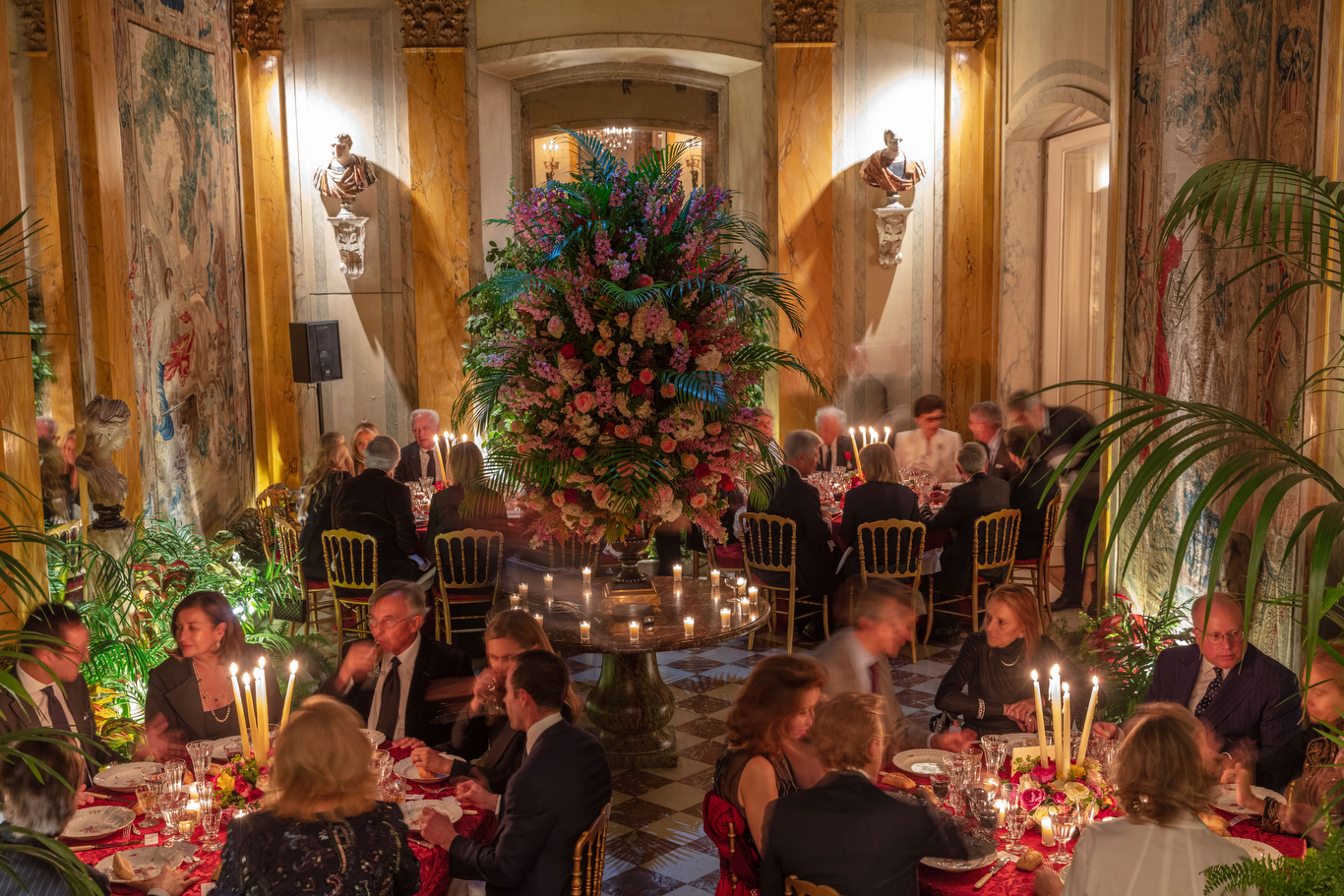 “You gave me the chance to wake up this old family home and the chance to express my admiration,” she said in her musical voice. “Ralph, you have so much talent, such a brilliant mind, such an incredible instinct for the right things, and you created such a success that some people could truly be jealous.”

De Ribes went on to praise Lauren’s “famous understated sophistication” and share her own philosophy on gracious living: “The art of elegance is how to be astonishing without creating astonishment.”