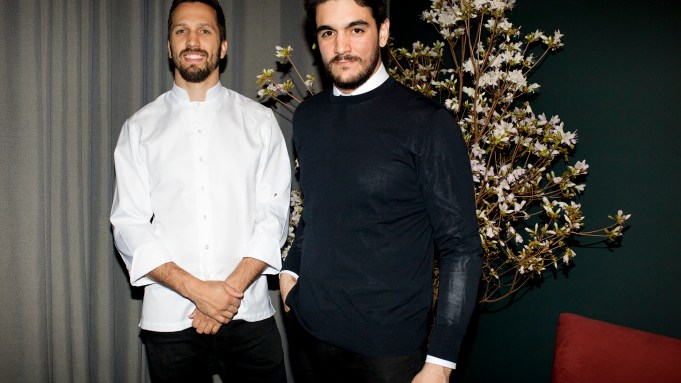 Glancing in from West 8th Street, Frevo doesn’t look like a restaurant. It looks like a micro art gallery.

“Somebody walked [by] and said ‘I’m sorry, you guys really did an art gallery with five paintings?'” recalls chef and co-owner Franco Sampogna a few days before opening, right after they tore down the paper covering the windows and passersby began to react to the West Village’s newest dining addition. “And I looked at her, ‘You have to look a little bit further.'”

Behind one of those five paintings is a door, which leads inside the atmospheric 24-seat dining room of the contemporary French eatery.

The art gallery-restaurant format was a creative solution to a common hurdle facing restaurateurs in New York: real estate. After searching around, Sampogna and co-owner Bernardo Silva fell in love with the space, but the footprint was larger than they were initially looking for. So they decided to incorporate a gallery in the separate front space, which will feature rotating works by artists.

“Sometimes you don’t have the funds and you have to be creative,” says Sampogna. “I’m going to quote a rapper but it’s true, there’s beauty in struggle. When we struggle, sometimes you come up with things that you’re not initially supposed to think about, but suddenly by the fact that you’re having a hard time you see things in a different way.”

The opening exhibition features new works created on location by French artist Toma-L. Sampogna first encountered the artist as a young chef in France, where he and Silva met at the age of 17. Both men were young expats, and they bonded over a shared language: Portguese. (Sampogna grew up in Brazil and Silva in Portugal.)

The pair decided that they would someday open a restaurant together in New York, before they even knew what that really meant. Ten years later, they are realizing that dream at Frevo.

“This is even before I started cooking,” says Sampogna, who had moved to France to attend culinary school. “The project was a long, long time in the back of our heads.”

In France, both accumulated impressive résumés: Sampogna cooked under Fabrice Vulin at La Chèvre d’Or in the South of France, and in Paris with Guy Savoy at the Rue Troyon and Alain Ducasse at the Hotel Plaza Athénée. Silva worked in hospitality management at Restaurant David Toutain, the Shangri-La Hotel in Paris and Hôtel Windsor in Nice. The pair first linked up Stateside in 2016 for the opening of Jema, a fine dining restaurant on Long Island that closed last year.

“The goal was to work there for a year and then sell the space,” Sampogna says. “So when we sold it then we knew it was either go home or do or own thing.”

The five dish tasting menu at Frevo was created with modern dining habits in mind — upscale but not stuffy, variety without the time commitment of endless courses. The seasonal menu reflects Sampogna’s classic French culinary background, but also incorporates elements of his native Brazil; he uses the popular Brazilian Picanha beef cut, and adds coconut and pistachio puree to an otherwise classic green asparagus dish.

During two nightly seatings, diners are ensconced around a curved chef’s counter framing an open kitchen, where Sampogna and chef Pierre Magnolini, along with a very small cook and service team, will plate dishes and serve diners. The whole experience is primed to mirror the intimacy and hospitality of being welcomed into someone’s home.

Frevo means “to boil” in Portuguese, both a cooking reference and metaphorical nod to the creative hotpot that is New York.

“It’s the most exciting place in the world,” says Sampogna when asked about the potency of New York as a young chef. “Creative people go wherever creative people are.”