LONDON — As the Paris collections drew to a close, creatives descended on London for the opening of Frieze Art Fair, transforming Regent’s Park into a street-style haven that gave fashion week a run for its money.

Guests at the fair, which runs until Sunday, included buzzy up-and-comer Molly Goddard, Raf Simons, Yana Peel and Princess Eugenie of York — who managed to squeeze in a visit a week before her nuptials on Oct. 12. Such guests roamed the enormous halls in their new–season corduroy suits, Roksanda dresses and Loewe Gate bags, in search of inspiration, business and good photo–ops.

The latter came in the form of a giant sculpture of a man, smartphone in hand, gazing over the crowds by Urs Fischer; pastel-hued phone booths by Camille Henrot that are meant to be “unconventional self-help hotlines,” and toilet booth installations with flashing lights and blood-stained posters of Winston Churchill.

Despite Brexit — there’s still no deal approved, and the U.K. has to leave the European Union next year — the weaker British pound and economic uncertainty, the fair drew a large number of international galleries, particularly from the U.S., who expressed a positive outlook and the full intention of doing business in London, whether it’s a part of the EU or not.

“The art world is very international, the fair in London is not dependent on people who live in London, and people come from all over. So the situation in any one country doesn’t really affect the art world that strongly,” said Janelle Reiring of New York-based gallery Metro Pictures. “Art fairs are increasingly important because all the collectors come here and London is an amazing city where a lot of different people gather anyway, so it’s particularly good.”

Esther Kim Varet, who represents the L.A.-based gallery Various Small Fires, echoed her thoughts, arguing the fair is an essential opportunity to connect with European artists and London institutions.

“London obviously draws a lot of international collectors and that’s not likely to change. But when we come here, we are also connecting with artists and it allows us to build relationships — and push them — in a way that we wouldn’t have been able to otherwise,” said Varet.

Similarly, ACA Gallery in New York said it attended the fair to highlight the work of the artist Faith Ringgold, known for her tapestries. Apart from connecting with new buyers, the gallery said maintaining an ongoing conversation with museums in the city is another key element, and they had already sold some of Ringgold’s works to Tate Modern ahead of the opening.

Galleries based in Dubai, a region working tirelessly to put itself on the art world’s map, are also increasing their presence in the fair. Just like their U.S. counterparts, they appear little concerned by the potential effects of Brexit.

“For us, it’s not a major concern being from Dubai. We feel that people will still be coming to Frieze London. Whatever happens in the world, people still go to art fairs and the art world can always adapt to the changes quite easily. I don’t think London will be shut from being one of the major art capitals of Europe,” said Ekaterina Plastinina of Green Art Gallery.

Given the fair’s buzz, luxury retailers and brands wanted in on the action. They hosted parties and unveiled projects to coincide with the event.

Net-a-porter hosted a lunch to highlight its charitable initiative, a jewelry edit featuring pieces by the likes of Carolina Bucci, Andrea Fohrman and Diane Kordas. The pieces were inspired by the star logo of the charity Make-a-Wish, and the retailer said 20 percent of the sales proceeds will go toward the charity.

On Wednesday night, Etro threw open the doors of its vast Old Bond Street flagship for a 50th anniversary celebration and hosted the French artist Patrick Tresset, whose robotic creation was doing portraits of guests.

Tresset creates his black-and-white portraits using a small camera and a robotic arm and pen, all of which he developed himself. They were positioned on an old wooden school desk in a stylish blend of past and future.

Another robot is on display in the store’s window, constantly drawing still-life elements, including the embroidered Etro Rainbow bag.

“I’ve always been interested in technology, and making this was such an adventure,” said the Brussels-based artist, whose robotic pen has scratched out more than 30,000 portraits so far.

Jacopo Etro, the evening’s host, said he invited Tresset to the store, because “I have a love/hate relationship with technology. I just love that old wooden desk — it’s a combination of old-school and new technology.”

Of late, Etro has been doing more tech-loving than hating. He said he was forced to stop wearing Swatch Irony watches — after 25 years. “They went out of production, and now a friend bought me an Apple watch, so technology is a part of my life.” 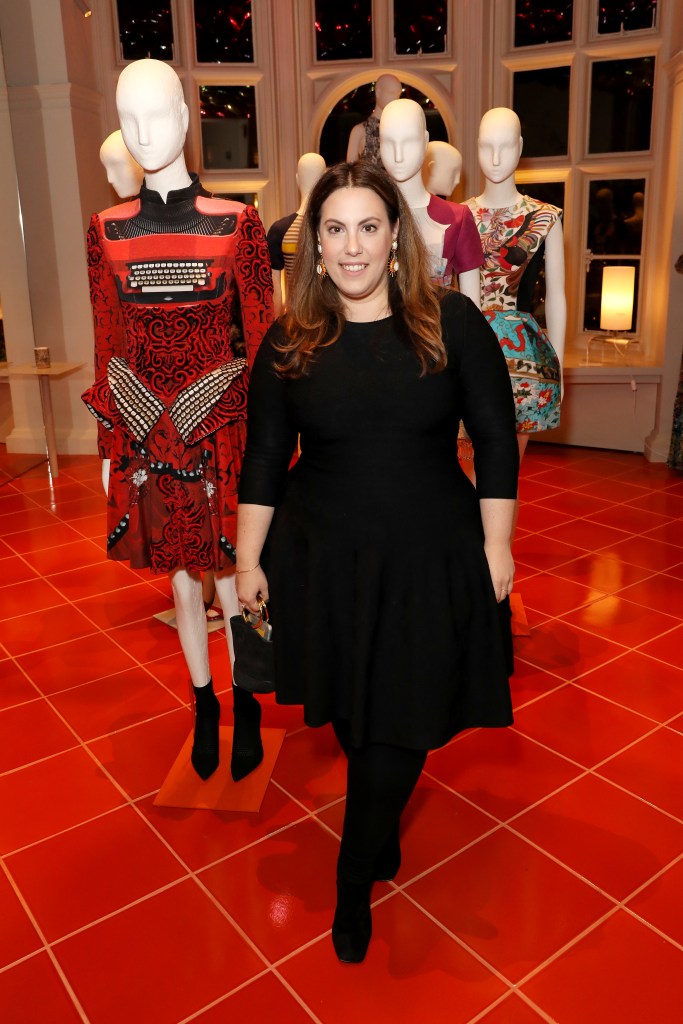 One day later and a few roads down, Mary Katrantzou was celebrating her 10th anniversary at 5 Carlos Place, the Matchesfashion.com’s new Mayfair town house.

For the occasion, Katrantzou dressed the ceiling with multicolor balloons, while mannequins across the space displayed some of her most recognizable designs, including the balloon gown exploding with print and crystal embellishments that Cate Blanchett wore on the red carpet at the Cannes Film Festival; the lampshade skirt; a column gown shaped like a perfume bottle and the “Typewriter” dress, a red and black sculptured creation with the buttons of a typewriter printed on the bust.

“That dress is me, it’s everything I like, embellishment and a strong structure,” said jeweler Sabine Getty, pointing to the column gowns. Getty, who has been cooking up a footwear collaboration with Aquazzura, was one of the hosts of the evening and was joined by Princess Beatrice, Sandra Choi and Wendy Yu.

Princess Beatrice was upstairs at the new town house, gazing at some of Katrantzou’s vintage designs. “All of her pieces are so timeless and unique — they don’t age,” said the royal, who was wearing a blue Katrantzou dress with a flared skirt from 2010. She said Katrantzou’s dresses also work “if you’re ever in a panic, and you want to look lovely as you’re headed out the door.” 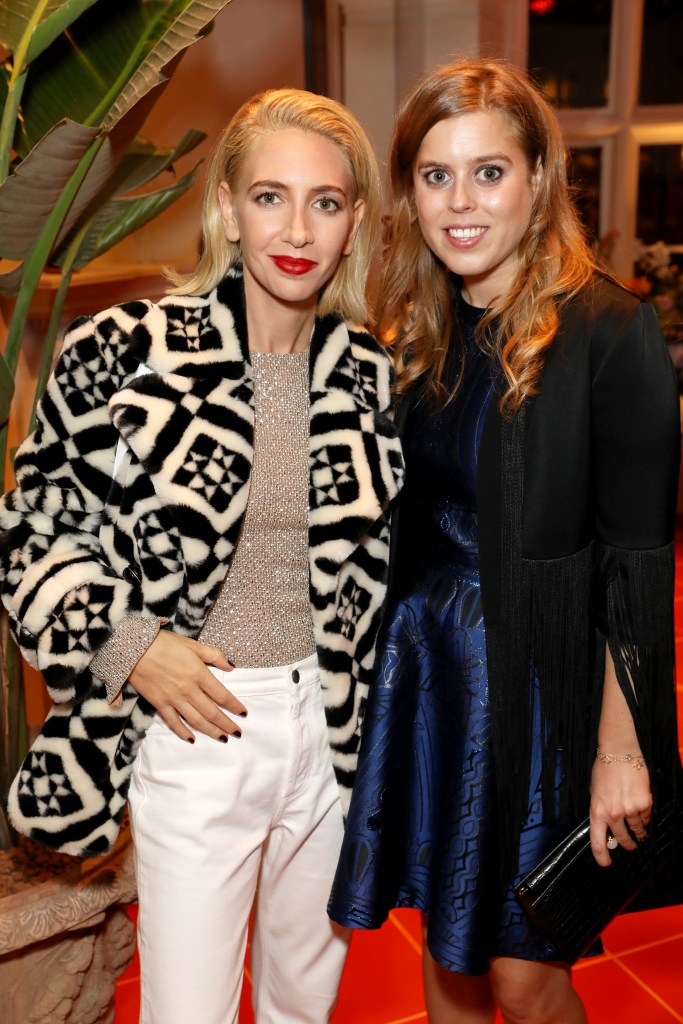 To mark the anniversary, Katrantzou has reissued 10 of her most-loved pieces from the past 10 years on Matches. “It was really hard to pick, I wanted to have 20, because everyone has different favorites,” said the designer, who had worked alongside Matches’ fashion and buying director Natalie Kingham to select the pieces. “Some of the dresses have already sold out. It’s great to revisit your past, you can reach people who might not have known who you were back then, and it also brings back a lot of nostalgia.”

Christopher Kane was also marking Frieze. At his shop, a curated selection of original artwork by Chris Foss and Charles Raymond from “The Joy of Sex” and “More Joy of Sex” was on display. “The life drawings are so beautiful, and the books were so revolutionary at the time — and educational, too,” said Kane, whose store was filled with leather clutch bags emblazoned with phrases from the book such as More Joy, and dresses and sweaters featuring some of the racy — but tasteful — book illustrations. 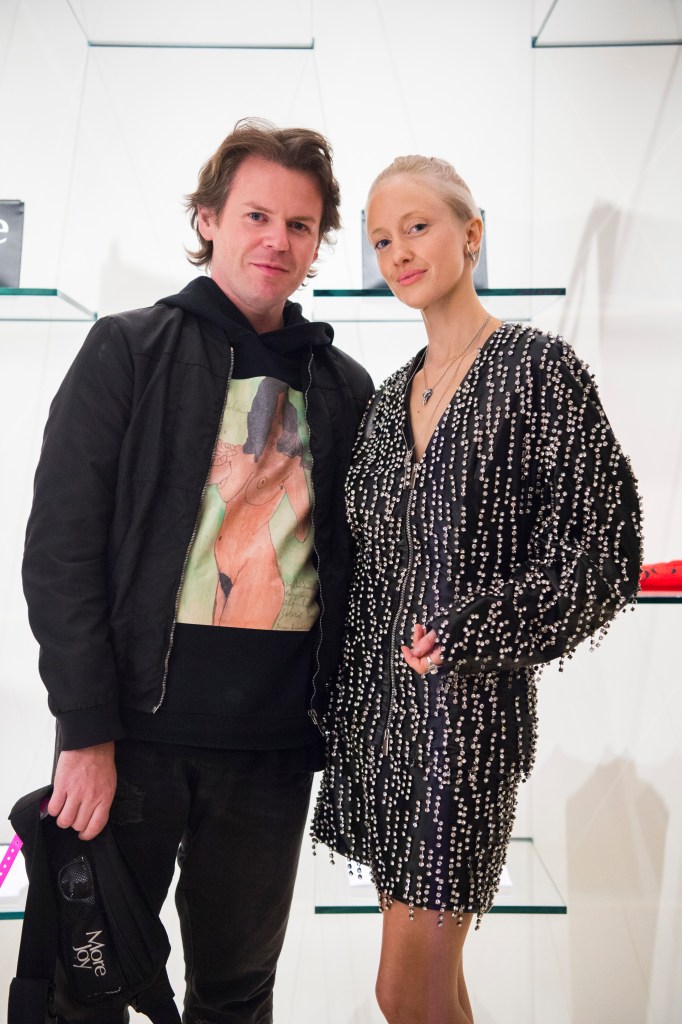