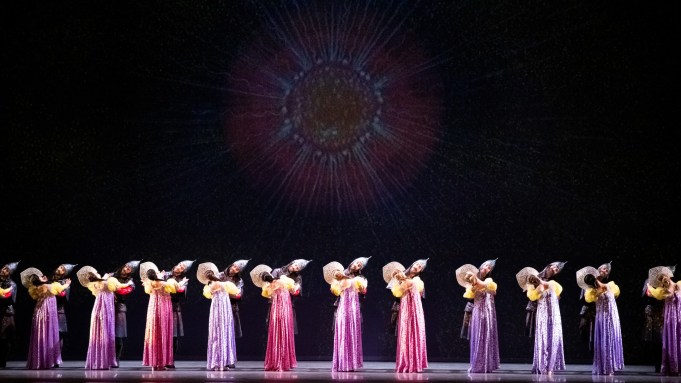 MIAMI — George Balanchine’s “Firebird” has flown the coop. His compressed rendition of the ballet—the first ever with a Russian storyline that Michel Fokine originally choreographed for the Ballets Russes in the early 20th century with Igor Stravinsky’s score—hasn’t been performed outside the New York City Ballet since its debut in 1949. No one’s exactly sure why, but the production’s priceless sets and costumes painted by Marc Chagall certainly weren’t going anywhere. After all these years, Miami City Ballet has emancipated the iconic work through new sets and costumes. It premiered on February 14 and travels to Fort Lauderdale and Palm Beach through March 1.

“It’s equitable to share masterpieces. That Mr. B’s ‘Firebird’ remained in one company is like if a museum hoarded all the Impressionists,” says Miami City Ballet artistic director Lourdes Lopez, a former NYCB principal who grew up within the work, having danced all of its female roles from a cake bearer as a child (it was the first time she saw Mr. B on stage) to the lead. “I initially thought to digitally project Chagall’s art but never heard from his estate. So, we came up with Plan B.”

Since Jerome Robbins had revised some of Balanchine’s choreography, his trust owns the rights and approved her request.

She commissioned several stage veterans for an entirely new look, with the only caveat that it stayed true to Russian folklore. It was a natural fit for the production’s set and costume designer Anya Klepikov, a native of the Crimean Peninsula whose homeland’s ubiquitous Firebird is embedded in her memory. Creative director and projection designer Wendall K. Harrington’s credits include “A Midsummer Night’s Dream” for MCB and choreographer Alexei Ratmansky’s fresh version of “Firebird” for the American Ballet Theater, while James F. Ingalls is another familiar face around MCB after designing its lighting for “George Balanchine’s The Nutcracker” and Ratmansky’s “The Fairy’s Kiss.”

Despite their combined visual backgrounds and watching archival videos as research, it was surprisingly Stravinsky’s music that inspired the central motif.

“He creates heat and light when the Firebird appears, and it reminded me of Russia’s traditional Palekh boxes [hand-decorated in painted and enameled scenes] with saturated colors against black backgrounds,” says Klepikov, regarding one of many references to her country’s craftsmanship. “The princesses wear kokoshniks, traditional, elaborate Russian head pieces. Killer costume studio in New York, which makes Victoria’s Secret’s angel wings, sewed thousands of pearls on them.”

She really made the rounds, sourcing antagonist Kastchei’s mask from Rodney Gordon and the tree monsters’ and knights’ costumes from Parsons-Meares, among a top pool of talent. MCB costume director Eleanor Wolfe, who spent nearly 20 years with Barbara Matera in New York, contributed her share, too, most importantly, the Firebird’s costume designed by Klepikov.

“Lourdes said its feathers needed to be pokey and that a simple unitard with a tail would be too contemporary; there had to be hip coverage for it to be in line with the classical movements and fairy tale,” says Klepikov.

Aside from an homage to Russia, Klepikov’s goal was to ramp up the scary quotient. Teeth-gnashing, wild-eyed goat monsters suffer from mange, and satyr-like monsters sprout demonic horns and tails. Kastchei is accessorized in human bones. There isn’t a trace of Chagall but starting with a clean slate has its advantages. Technology fills in narrative gaps to clear up confusing scenes like when, out of nowhere, the knights and princesses enter together before the wedding finale.

“We connect the dots for the audience, so they watch animation of the knights being freed from the tree vines before they waltz in,” says Harrington, who added a very good point about new hard sets and projections. “They can travel, unlike fragile, expensive ones built in the 1940s.”