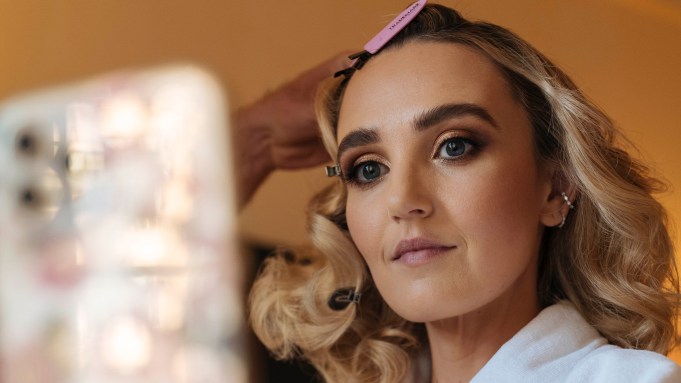 The morning after her first Met Gala, “Saturday Night Live” breakout star — and recent fashion fixture — Chloe Fineman is still buzzing. “I’m waking up from a dream,” she says over the phone. “I kept feeling like I was in the illuminati. You’re literally seated next to, like, Rihanna — it was crazy. Most conversations I was having the conversation but then my other eye was, like, ‘Oh my god!'”

Fineman found out she was invited about a month ago, and promptly began working with Tory Burch. “I pulled a lot of 1920s inspiration and then found out that I was in great hands because Tory was doing her dresses inspired by Claire McCardell. I think most of us had pockets in our dresses, the stitch work was inspired by Claire McCardell. It was then this hybrid of these sheer dresses that I loved and mixing it with Claire McCardell inspirations. And it turned out way more beautiful than I could’ve ever imagined.”

After her first fitting, she didn’t see her dress again until last week. The second fitting was Wednesday and the final look was at 5 p.m. Sunday night, hours after Fineman attended Burch’s spring 2022 show.

The whole Tory team got ready at the Pierre Hotel, where Burch lives, and Fineman was joined by her sister and her sister’s boyfriend, who came to take photos.

“It took awhile to find the right playlist. At first it was Gaga and then it turned into 1950s music, [to match] the vibe of the dress,” Fineman says. “It was dreamy and heavenly and very, very surreal.”

Highlights of the night included getting to run into the many familiar famous faces she’s gotten to know since joining the cast of “SNL.”

“What’s exciting is the people who come to ‘SNL’ like Kristen Stewart or Chance the Rapper, you feel like they’ve been your friend for a week so it was cool to see them again,” she says.

Her favorites of the night were Billie Eilish and Lorde, who wore a favorite brand of Fineman’s, Bode. “[I loved] the way that she was on theme but so totally herself was flawless.”

In the last year-plus, the comedian has steadily built a relationship with the fashion industry, most recently sitting front row at NYFW and walking in shows like Batsheva.

“At work, it’s always sweatpants — I’m usually in a jumpsuit because I just want to be as comfortable as possible because you never know what you’re working on,” she says. “Getting to be at fashion week with my sister, we’ve always been obsessed with clothing and looks, so it’s so inspiring and seeing so many people uniquely represent themselves. I’m so lucky I get to dip my toe into this fantastic world.”

A Look Inside The Mark Before The Met Gala

Getting Ready With Jack Harlow, Who Made His Met Gala Debut With Tommy Hilfiger

P.J. Tucker Gets Ready for the Met Gala in Gucci