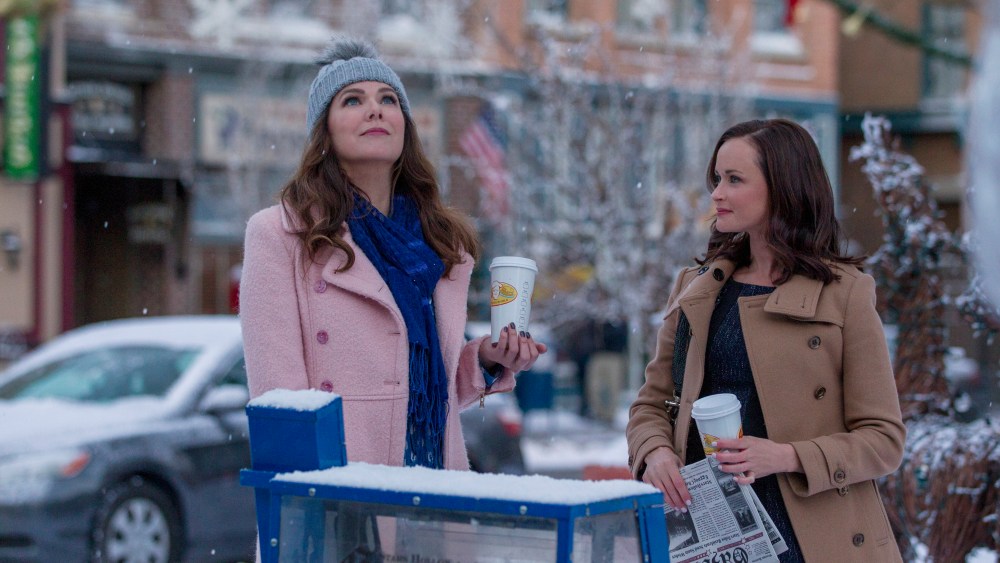 It’s been over nine years since “Gilmore Girls” aired its final episode and on Friday, the residents of Stars Hollow, Conn., will come alive once more in Netflix’s four-part reboot of the show. Ahead of the release of “Gilmore Girls: A Year in the Life,” WWD chatted with costume designer Brenda Maben to learn more about her work on the upcoming series.

Maben spoke while vacationing in the U.K. She was touring Portchester Castle at the time — “It’s a genuine castle with a moat, but it doesn’t have any water in it, so I was a little disappointed.” She couldn’t divulge any details on the “major, fun things” that unravel in the upcoming reboot — the Netflix gods want that to be a total surprise — but she did reveal gems like how it felt to be reunited with the cast members, as well as the significance of Rory Gilmore’s Jamah handbag, which had originally been commissioned by the Patient Safety Movement for Hillary Clinton.

WWD: What was it like returning to the show?
Brenda Maben: Kind of great because I got to reunite with all the actors, which I absolutely adore. The story continued and everyone was really curious about what was gonna happen, how it was gonna happen and you know, did the characters’ lives change drastically while we were gone or not. So a lot of questions got answered and a couple of surprises, and it was just a great experience.

WWD: Had you kept in touch with the cast members?
B.M.: Yes, off and on, a couple of them. We were like a family. That’s the only way I can describe it. When we came back for the show, it was as if we had never left. Their same shorthand speaking was still there, the understanding of what each person was trying to convey to the other person. It was like family. We picked up where we left off. I’ve heard of other shows getting back together and it’s a little awkwardness, a little not as smooth. This one was really smooth. All of the actors — or at least the majority of them — have gone on to do other things and bigger things. For example, Melissa McCarthy. It was as if I had seen her the day before. It was one big happy fest.

WWD: How have the main characters’ styles changed?
B.M.: I would say that they are a lot more mature. They’ve evolved quite naturally like any person would in a business that’s doing well. Rory maybe progressed a little more only because she’s now a working adult from college and, of course, you’re going to change your clothing a little bit because you’re in the workforce.

WWD: What’s the story behind Rory’s bag? Jamah designer Nancy Gale told us that it was commissioned by the Patient Safety Movement for Hillary Clinton.
B.M.: Her work bag, yeah, it’s Jamah. I don’t know if Hillary Clinton, like, actually wore it. I know Bill Clinton has one, also. I’ve never seen Hillary with it in print, so I can’t say, ‘Oh yeah, she wears it all the time’ because I don’t really know Hillary Clinton. But that wasn’t the reason why [I chose it]. The reason why I chose the bag was because I liked the way it looked. I felt that that particular bag would relay what I wanted to say and what I felt Rory would have, given that she’s been to Europe, she’s been on jobs, she’s in the workforce now. When you start a new job or you’re just starting off, especially Rory coming from the standpoint of her grandparents, you buy one good bag. You buy a quality bag and that bag will last you for a really long time. The bag is made in America, and that was the other thing that really attracted me to it — plus, it was blue. It’s a great bag. I wish I had that bag.

The other thing is that after the show was over, Alexis [Bledel] had agreed to sign the inside of the bag and give it back to Jamah — because we rented it, actually — so that they could auction it off. The proceeds of the auction go to this organization called Ambition. I do a lot of volunteer work with them and their high school kids that are learning how to be successful in the world and learning how to do whatever it is they want to. I’m part of the mentoring program. I volunteer my time whenever I can. I just thought that was a good ending to that bag, to be able to help the kids. If you want to learn anything about Ambition, you can go online. It’s ambition.org. I could talk to you for hours about how great it is, and the mentors are amazing. They’re all professionals in their specific fields and they take precious time out of their day and show up to the school early in the morning and talk to the kids in their class and give them advice about so many things, like how to set up a banking account, how to save money, things like that. So that was the other part of the bag because I think Rory would have done that, too.

(Jamah designer Nancy Gale said in a separate interview that Patient Safety had commissioned her to design bags for Bill, Hillary and Chelsea Clinton. Gale has yet to see pictures of the Clintons with the bags, and she said one probable reason for this could be the government’s policies on gifts. “Even though Patient Safety commissioned me, they gave [the bags] as a gift to [the Clintons],” Gale said. “So with the government, the gifting stipulations are so strong. I do know [Hillary Clinton] got them because she sent me a letter, and I know Bill has them because I handed them to Bill.”)

WWD: Something we’ve gleaned from the trailers is that Lorelai Gilmore is in the middle of a midlife crisis. How did that translate to her clothes?
B.M.: I think it was more of a verbal statement as opposed to being one that showed up via the clothing. She didn’t do anything super wacky.

WWD: There has been so much anticipation around the show’s return. Did that —
B.M.: Did that make me nervous? Yeah.

WWD: Did the anticipation make you feel any sort of pressure to go all out with the costumes?
B.M.: No, no. I’m all about the character and I wanted to stay true to the character more than anything else. All the choices were made solely on the natural progression of each character. Some characters stayed the same basically because that’s who they are. Through life, I know you have at least one friend or one person that you knew in college that 10 years later, you see that person and yeah, they have on different clothes, but they’re basically kind of the same. Maybe a little different color, but it’s still ‘Oh yeah, that’s so and so.’ I kinda felt that that was important to keep that continuity going.

WWD: Anything else that you’d like to add?
B.M.: It’s really great. I can’t wait to see it all finished. I’m excited, too. I’m coming home to make sure I watch it on my personal television.

“Gilmore Girls: A Year in the Life” is out Friday, Nov. 25 via Netflix.