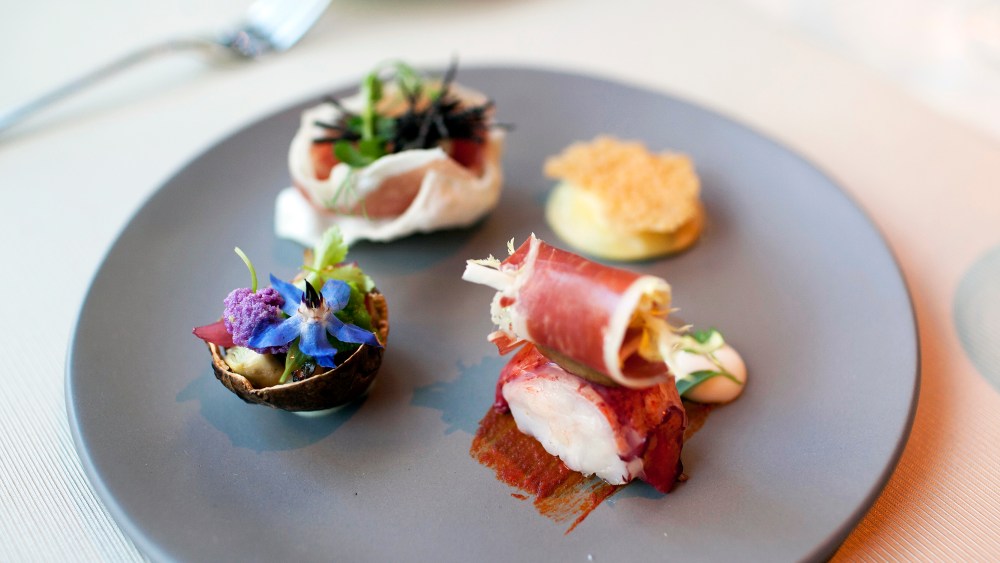 On March 23 and 24, Fifth Avenue and 56th Street in Manhattan was the location of an international collaboration. The Armani/Ristorante dining series “A World Journey: Four Chefs From Four Corners” had made its way to New York for its fourth and final leg, following prior dinners at Armani/Ristorante locations in Milan, Tokyo and Dubai. Chefs from each restaurant — Filippo Gozzoli from Milan, Francesco Mazzi from Tokyo and Alessandro Salvatico from Dubai — had flown in to Michele Brogioni, who heads up the restaurant on the fifth floor of Armani’s New York flagship, to create a tasting menu showcasing “signature dishes” from each of their cities.

“The experience of Armani/Ristorante truly engages all the senses,” Giorgio Armani commented by e-mail. He elaborated on how the traveling event, which kicked off in November 2015 in Milan, aligns with the designer’s broader brand mission. “The Armani/Ristorante fully express my philosophy and aesthetic vision. In the past 40 years, I wanted to create an all-round Armani lifestyle that would reflect my ideas and would be applicable to various areas beyond fashion. I believe this concept is particularly manifest in the restaurants’ interiors.”

The spacious New York dining room had been outfitted with bouquets of orchids and the scent of a Diptyque Baies candle. The five-course dinner began with an amuse bouche featuring a sculptural “bite” created by all four chefs, followed by a langoustine tartare with burrata from Tokyo, beef tartare with beets from Milan, fregola with artichokes and foam from Dubai, and a 50-day dry-aged beef from New York. The meal concluded with a collaborative dessert — “La Grande Apple.”

On the last night of the event, the room was lively as the chefs emerged from the kitchen to a round of applause. They continued their journey from table to table, obliging photo requests and accepting praise. Although the “World Journey” had officially concluded, most of the chefs still had some traveling ahead of them — Salvatico noted that he was flying back to Dubai the next day. “Speak!” a diner shouted to the quartet, but they already had — through the language of food.