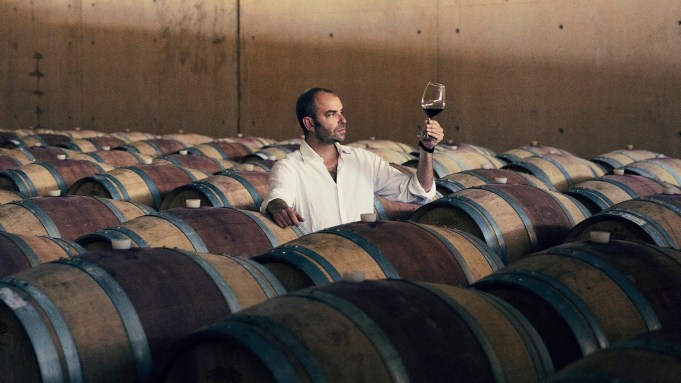 ROME — From jewelry to grapes, Giovanni Bulgari’s venture into winemaking is another form of creative outlet.

After years of traveling the world to seek out the best gems from Tel Aviv and Hong Kong to Sri Lanka and Japan for his family’s jewelry company, Bulgari is now living his dream of working outdoors on the land, with products that reflect the territory he loves: Podernuovo a Palazzone, near Tuscany’s Siena.

In 2004, Bulgari, together with his father Paolo Bulgari, longtime chairman of the Rome-based jeweler, bought the abandoned Podernuovo estate and transformed it into a full-fledged international agricultural firm and award-winning vineyard. Giovanni Bulgari is now introducing his estate’s first white wine, 13,000 bottles of a Vermentino called Nicoleo — a moniker that blends the names of his two sons Leone and Nico — and is investing in the restaurant business. First opened by longtime friend Nicola Malaspina, Bubi’s restaurant in Rome has been joined by a new unit in Milan. Francesca Zanoni, with a background in communication for groups including Valentino, Procter & Gamble and Bulgari, is the third investor in the venture.

“I see this as a way to understand our end customer and observe the market by having direct access to it,” explains Giovanni Bulgari at the Roman venue. “The restaurant world has always fascinated me but I didn’t want to take any chances. So I felt it was more reasonable to partner with someone as experienced as Nicola, whom I’ve known for years and whom I respect.” The human contact with customers is also key, says Bulgari, allowing the partners to “present our project in a fun way and to entertain them. We want to transmit our passion.”

Both of Bubi’s units in Rome and Milan are located in residential areas and Malaspina relies on word-of-mouth. “This is an alternative to eating at home and at a reasonable price, so the food is not too elaborate and based on seasonal ingredients,” says Malaspina. Case in point: Bubi’s roast beef and mashed potatoes is superb and a bestseller.

The cuisine is Mediterranean with a Roman influence, ranging from Amatriciana pasta to “tonnarelli,” special thick spaghetti, with shrimp and zucchini. The Milan venue, which opened in November close to the city’s Arena, is modeled after the Rome restaurant, which has been operating for a decade near the Arts Academy. “We also have a coffee bar for breakfast and for aperitivo,” says Malaspina.

Adjacent to the Roman location, there is a small shop that sells Italian delicacies, including Bulgari’s wine, oil and produce from the estate. “I like how the quality of the food is superior but the tone of the restaurants is informal,” says Bulgari. “And fast — I hate to sit and wait for food,” observes Malaspina. “People have busy lives.”

This strategy works as customers are “regulars coming in between two and four times a week,” he notes. “We know how they would rather we skip adding garlic or parsley because they worry about their breath or having green bits in their teeth,” he says with a laugh.

Whatever they are doing must be working — there is not an empty table in the restaurant’s rooms, which are painted in a soothing sage-green hue. Similarly, the goal is for the space to be “lit up enough to read the menus, and not too noisy so that people can converse without having to shout.”

Malaspina says he joined forces with Bulgari because of “the high quality of his wines. I always let our customers choose the bottles, without forcing anything on them, and Giovanni’s wine always performed very well. And, apart from the friendship with and confidence in him, I felt that what he’s doing with his estate is similar to what I do here.”

Exports today account for 90 percent of Bulgari’s wine business and, in the face of what he calls a “fiercely competitive market,” the young entrepreneur is focusing on quality, the “elegance” of the wines, and “on a vertical expansion.” The U.S. is “fantastic” he says, and has grown to become one of the two top markets for the Podernuovo a Palazzone brand, with China. Major clients include hotels ranging from the Four Seasons in Los Angeles and Florence and the Kowloon Shangri-la in Hong Kong to the Ritz Carlton in Shanghai and Chengdu as well as the Bulgari Hotel in Milan, or restaurants such as Marea in New York, Acquerello in San Francisco, Dean & Deluca in Japan and Spago in Los Angeles.

“I felt the need to move away from Rome and work on the land,” Bulgari says simply of his decision to change his life and indulge his craving for agronomy.

With his laid-back, easy and understated manners, the ruggedly handsome Bulgari is hard to imagine in any corporate business. On a trip to the estate, which covers more than 20 hectares, Bulgari proudly and carefully details the steps in the winemaking process, explaining the reasons behind different wood or steel barrels, or pointing to a machine that turns out 1,300 bottles of wine an hour. It is clear that he is no figurehead. The Podernuovo a Palazzone winery is his project and brainchild, one that Bulgari fueled and developed by studying and taking agriculture and sommelier courses.

The cellar is perched on a hill overlooking the vineyards, which comprise 5,600 plants per hectare. Located at the southern tip of Tuscany, in the Chianti area, a 90-minute drive from either Rome or Florence, and at around 350 meters above sea, the land is also peppered with rows of olive trees, which produce a savory oil. There are fields of wheat and vegetable and fruit gardens, and a few animals, including hens, so that the estate is basically self-sufficient, as its chef prepares bread and jars of mouth-watering jams and tomato sauce. “It’s all natural here, we use biological products, algae, propolis and not much copper or sulfur,” Bulgari remarks.

Bulgari is striving for sustainability and a low impact on the land, which is rich in clay, starting with the cellar, with its geothermal power and solar panels. The ambition is to bring its carbon footprint close to zero.

Bulgari has consciously avoided associations between the family business, which is now controlled by the LVMH Moët Hennessy Louis Vuitton group, and his winemaking estate. The most distinctive element of the label is a design of six red lines representing the rows of grapevines. That said, one of the Podernuovo wines, a Sangiovese, is called Sotirio, named after the founder of the jewelry firm. This debuted in 2009, together with Argirio, a cabernet franc, and Therra, a blend of Sangiovese, Montepulciano, cabernet sauvignon and merlot.

“They used to sell grapes by the crates here, but we replanted new vines in 2007,” he says, adding that it generally takes three years for a new wine to be ready. Bulgari underscores the risk involved with each harvest, “working on the natural resources for 15 days, grapes that cannot be replicated and are perishable. The tension built up over one year is channeled in those few days.”