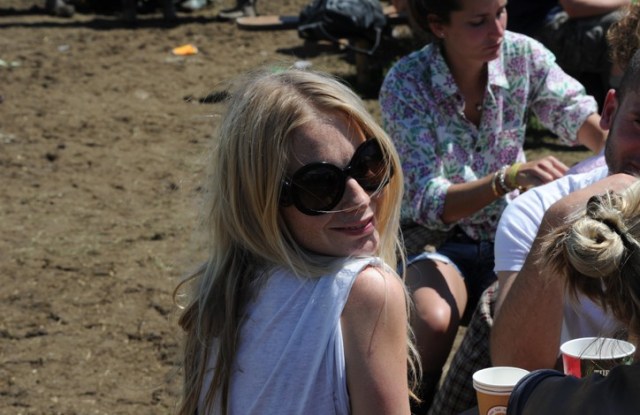 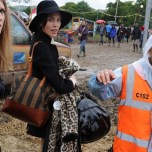 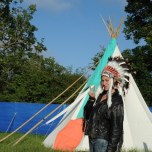 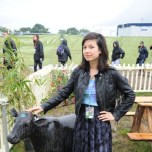 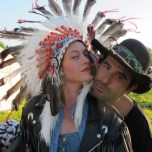 “The mud’s going to get you anyway so you might as well embrace it, and give up on trying to look perfect,” said a joyfully resigned Tali Lennox during England’s muckiest music festival, Glastonbury, which took place last weekend.

Alexa Chung offered up her own wisdom, which came with a bit of poetic punctuation.

“Only bring the things you don’t mind getting ruined,” she said as she narrowly missed being sprayed by a reversing tractor.

Right on cue, the rains came down in the run-up to the annual midsummer festival in Somerset, England, where 200,000 revellers — from little children to pensioners — regularly pitch tents on soggy ground, slosh their way from stage to stage, and slug the local apple cider.

The crowd included such dedicated music lovers as Kate Moss, Ali Hewson, Maia Norman, Georgia May Jagger, Poppy Delevigne, Emmy the Great and Shingai Shoniwa of the Noisettes. Shoniwa’s strategy was to ignore the sludge altogether, and glam it up.

“Mascots, hats, glitter, paint — who cares about the mud when you’re leaving a trail of glitter wherever you go?” she said.

While cold and rain marred the first day, the music gave everyone a lift. U2 gave a sensational performance that opened with a video by Damien Hirst featuring the model Dani Smith. Jade Jagger and her party posse were spotted cheering on Primal Scream, Radiohead gave a surprise performance, and Jimmy Cliff and B.B. King both performed power-charged sets. Moss, meanwhile, watched from the sidelines as her husband-to-be Jamie Hince performed alongside his Kills bandmate (and soon to be best “man”), Alison Mosshart.

Ultimately, however, the festival belonged to the first woman to headline Glastonbury in more than 20 years, Beyoncé.

With fireworks lighting up the sky on Sunday night, she told the enraptured crowd: “Glastonbury, you are witnessing my dream.”