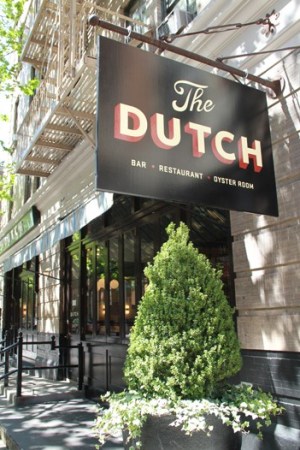 Reclining in his chair, Andrew Carmellini surveys the leafy, sun-dappled street from inside his newest restaurant The Dutch, located on the enviable corner of Sullivan and Prince Streets in SoHo.

Already fully booked on most nights, The Dutch serves up what chef-owner Carmellini and his partners Luke Ostrom and Josh Pickard, call “American” fare.

“We wanted a really good quality place that gives everybody the same experience,” said Carmellini. “We wanted a restaurant that we are comfortable in.”

But The Dutch is not your typical American eatery offering beer, burgers and fries, although it has all of that on the menu. To the three owners, who are also partners in Tribeca-based Locanda Verde, Robert De Niro’s Italian foodie haven, the term American means a “soulful, cultural mix of everything.”

“Good cooking transcends culture,” says Carmelini, who when pressed further to define the style of food, said: “It has the discipline of French, the soul of Italian and the bravado of American cooking.”

Divided into three rooms — a café, an oyster bar and a dining room that occupy roughly 4,000 square feet — The Dutch has a sleek, yet old fashioned look inspired by New York in the Fifties and Sixties. Like the décor, the restaurant’s name, too, is a throwback, referring to the late 1700’s when SoHo consisted of Dutch farms.

“We didn’t want to follow the naturalist movement and name the place after a vegetable,” said Carmelini, smirking at Ostrom and Pickard, who simultaneously erupt in laughter. “I think we’re probably good at a lot of things, but naming a restaurant? Naming a restaurant takes time. It’s like naming a child.”