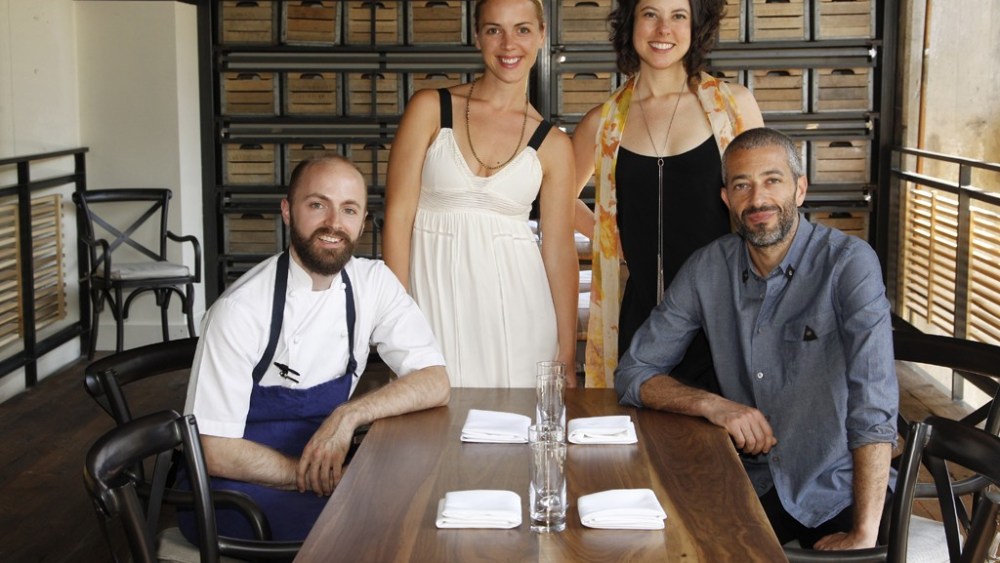 As of late, there seem to be no shortage of New York boîtes that put the concept of the “experience” before dining. Ingredients aren’t “found,” they’re “foraged.” Chefs opt for gastronomical complication above all else. Beverages sound more like perfumes. Ice is of the utmost importance.

At Governor, which opened in Brooklyn’s DUMBO last week, Tamer Hamawi, Elise Rosenberg, Emilie Kihlstrom and chef-partner Brad McDonald are trying to refocus the attention onto good, fresh food in an area of town that needs it. Along with Colonie and Gran Electrica, Governor marks the third Brooklyn eatery the team has opened in less than two years.

“We wanted to bring a comfortable neighborhood restaurant to the area, with a strong focus on what’s natural and what’s fresh and what’s local and what’s seasonal,” Rosenberg explains of Governor, which takes its name from a sobriquet bestowed on 19th century DUMBO industrialist Robert Gair, the inventor of cardboard. The 60-seat space, adjacent to the iconic Clock Tower factory-turned-condominium, is large and airy and bright, furnished with reclaimed wood, a vertical garden and framed pictures of Gair doodled over to look like Chairman Mao, John Lennon, a clown and a pirate.

“DUMBO is starved for a quality restaurant,” Hamawi says. “We’re right between the Manhattan Bridge and the Brooklyn Bridge, the carousel is right there…it’s an iconic New York experience.”

Over a plate of his Romaine a la Plancha — a tart and firm furl of leaves root to tip, elegantly plated with a swoop of ajo blanco, sunflower, pickled green tomatoes, a dusting of panzanella-cum-croutons and a few green grapes, also à la plancha — McDonald insists the team is not trying to “invent” anything with Governor.

“I would call it ‘American food’ in as much as American food is influenced from across the world and so is how we cook it.…I think that if you’re going to cook what people call ‘esoterically,’ that you at least have to have some sort of reference point for jumping off,” the chef explains.

His menu features crispy blowfish tails and beef tongue with potato purée and bone marrow popover. The former he refers to as “fish and chips,” the latter as his version of “meat and potatoes.”

“If you’re jumping off, where you’re landing is someplace different — so you have a reference point that you’re drawing on, but if it’s smart enough you’re liaising it or emulsifying it with another ingredient that’s super familiar, like brown butter or toasted garlic, you know, chicken stock or whatever it is that ties it all together,” McDonald continues. “We’re making things you recognize, but the best that we can and in ways that are going to make you feel good and energized and want to come back.”

The Mississippi-bred chef cut his teeth at Noma and Per Se and under Alain Ducasse at Essex House (and still retains his title as executive chef at Colonie and Gran Electrica). He notes that people have dubbed his cooking “feminine,” which he takes as a compliment.

“I don’t do ‘punch you in the mouth’ flavors,” he says. “What I work for is lighter, more subtle than that.”

McDonald’s savory menu is divided into three parts and ranges from raw and chilled small plates like lobster consommé with apple and fennel and beef tartar with a mussel emulsion and ramp capers to more substantive fare, like a crispy chicken breast served with farro verde porridge seasoned with the grated, salted rind of Woodcock Farm’s Timberdoodle cheese (McDonald refers to it as his “mac ’n cheese”). Pork neck is served with peaches, nasturtium, elderflower and pork jus. Pork neck does not sound particularly feminine.

“It’s the way that we treat them,” McDonald explains. “It’s a very herbacious, very light sauce. We take elderflower, which is a very aromatic, early summertime flower, and we infuse it into a vinegar, and when you add the vinegar back to the plate it lightens the dish up, it feels a bit fresher with the acid. The grilled peaches — I find any time I grill peaches for someone who’s never had them it’s revolutionary. The neck is just an extension of the shoulder, and the reason you can’t get it is that Americans value shoulder way too much. We get it because we buy the whole animal.”

McDonald breaks down about four whole pigs a week at Governor and harvests the necks and bones for stock, sending the trotters and the shoulder to Gran Electrica for use in carnitas tacos or Colonie for pork chops.

“We don’t throw anything away,” the chef insists. “Cherry pits we crush and infuse into the sauce, the lobster roe we churn into a butter to poach oysters in. We save the shells for stock.”

A different type of nose-to-tail experience.