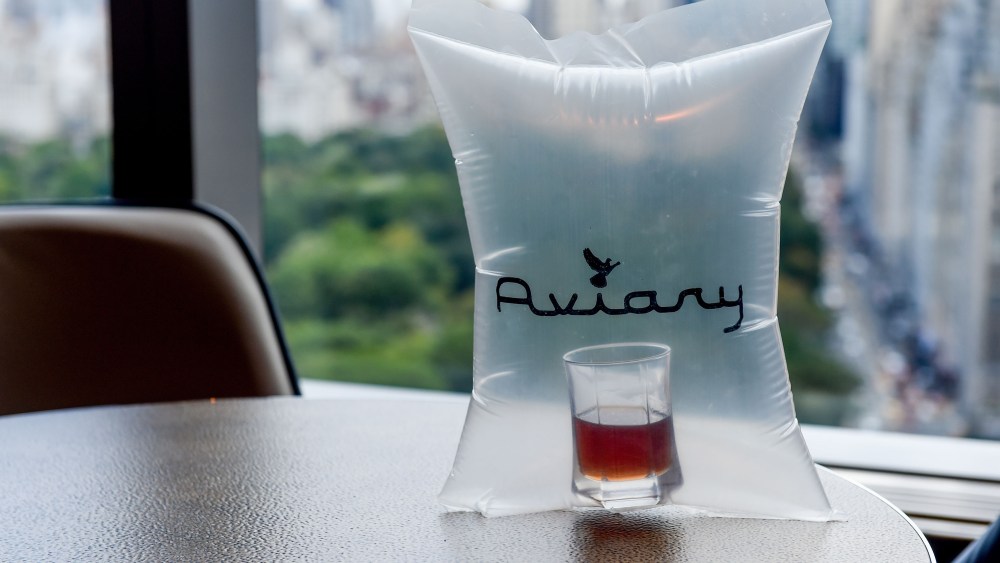 “It’s got to be one of the best views in the world, right?”

Grant Achatz was reflecting on the view from his latest project, The Aviary NYC, located on the 35th floor of the Mandarin Oriental New York. The new Manhattan outpost of his Chicago bar includes a wall of windows overlooking Columbus Circle and Central Park — impressive, and tough competition for the activity inside the modern dining room.

The Mandarin Oriental began talks with the Chicago-based Alinea Group six years ago; the hotel originally wanted Achatz and co-owner Nick Kokonas to bring their Michelin three-star restaurant Alinea to New York. “We kind of switched gears and said it might be better to bring The Aviary and The Office [another bar from the Alinea Group team and a subset of The Aviary] there, and work on more of the cocktail component of the hotel,” Achatz says. Not surprisingly, the hotel was on board with bringing in the high-concept cocktail bar, which comes with the added benefit of built-in name recognition since it’s regarded as one of the best bars in the world.

“I think New York has been excited to see the Alinea Group finally make its way there,” Achatz adds.

Their concept and approach to the menu mirrors that of the Chicago location, with small plates and artful cocktails often requiring multistep preparation. Points of difference between the locations mainly stem from just that — location.

“We’re 35 floors up in the middle of Manhattan, whereas here in Chicago we’re a ground-level bar, and it’s in the Meatpacking District in Chicago. You get a whole different crowd, you get a whole different feel,” says Achatz. “Coming to eat here in New York, you get in an elevator, take a ride up 35 floors and the space is, you’re clearly in a hotel,” he adds. “The Aviary has a lot of signatures, has a very identifiable fingerprint that we felt New York City wanted. It would be silly for us to change a bunch of things.”

However, there are several unique New York-centric touches to the menu — enter the Wake and Bake cocktail, which comes served in a puff-up The Aviary-branded plastic pouch.

“Riffing off that quintessential New York bagel, and a quintessentially New York cocktail, the Manhattan,” Achatz explains of the item. “So we combine the aroma of freshly brewed coffee and a toasted Everything bagel. It seemed like a very New York morning thing to do.”

Speaking of mornings, Achatz and his team are entering uncharted territory with their menu in New York: brunch. While still a few weeks from launch, the team will be serving an all-day menu; The Mandarin is a hotel, after all.

“Creatively it’s interesting,” Achatz says of designing a menu for a longer service period. “We’ve never done a brunch, so you have to take that creative approach of what you’ve done in the past and dinner service, and try to make that applicable for something that starts at 11 a.m., and try to make it approachable. People’s mind-sets are a little bit different at that meal period, where they still have places and things to do in their day. At dinner, at least with our group, dinner, drinking and entertainment are all intertwined. So at that point [diners] have come to the end of their journey in the day, whereas for any midday meal period, they still have stuff they have to do.”

So far, reception has been positive for the long-hyped arrival.

“I think we’ve just begun,” Achatz adds. “I always say it’s not a sprint, it’s a marathon. We look forward to refining it even further and getting it ramped up to full speed, and letting it go.”

More From WWD.com:
Fishbone Opens in Chelsea
Nick Jones Brings Cecconi’s to DUMBO
$500 Pours and More at the Library of Distilled Spirits