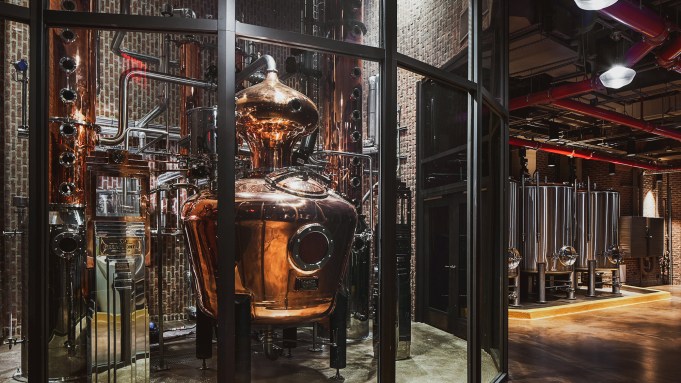 “There’s a reason no one built it before. Because it was very difficult,” says project manager Andrew Merinoff. There were only 122 buildings in Manhattan that could be used for high-proof distilling, and the team looked at all of them before settling on the 28,000-square-foot space at 686 Broadway, formerly a shoe store and cash register factory.

Located a few blocks north of Houston Street, the ambitious flagship and new whiskey brand has been six years in the making. The multilevel space, designed with education at the forefront, includes a working production facility, a restaurant, several bars and an immersive art installation.

The opening of the space also marks the official launch of the Great Jones whiskey label. Current bottles include a straight bourbon, which is sold wholesale, as well a four-grain bourbon and rye whiskey exclusive to the distillery’s shop. Bottles are priced at $40 to $50. The product is produced entirely using New York materials; grains are grown in the Black Dirt region in Warwick, where the brand has an auxiliary production factory to mill grain and barrel-age the product.

“Everyone associates bourbon with Kentucky, but history is different. There was a very strong bourbon-making tradition here in the New York area,” says Distillery Experience Director Rodrigo Braun, noting that distilling history traces back to Staten Island in the 1600s. Bringing guests inside the distilling process was key, and the facility will offer daily tours. The highlight of the flagship is the working distillery on the second floor, visible behind a glass wall. Visitors can also peer down into the facility from behind a glass balcony on an upper level. The centerpiece is a custom Vendome still created to mimic the skyline of New York.

Opening a distillery in Manhattan was a longtime goal for Proximo Spirits founder Juan Domingo Beckmann. (The opening was preceded by vodka distillery Our/New York in Chelsea, the first distillery to open in Manhattan in over a century.) It was also uniquely challenging, given the city’s stringent building laws — construction required over 6,000 different floor plans. But the team stresses that the building was built to exceed safety requirements: the distillery production room is explosion-proof, and all of the air in the room can be sucked out in 30 seconds in case of a fire.

A swanky lounge on the top floor will be used for private events, and the bottom level features a speakeasy bar for workshops, tasting events and classes. The facility tour also takes visitors through an immersive installation created by French artist Sébastien Léon that uses light, sound, sculpture, and olfactory elements to transport visitors to the Black Dirt region upstate. The scent in the space, meant to match the whiskey, is also sold as a candle in the gift shop.

The interior design is rooted in an aesthetic that references New York City in the ’20s and ’30s, with lots of brass detailing and honey tones. “The design premise here was nitty-gritty meets industrial elite,” says Merinoff. A custom map in the restaurant’s dining room lights up to reference the location of the city’s various speakeasies during Prohibition, and the team discovered an underground tunnel during the renovation that was likely used to transport spirits illegally.

“The key part about the space was paying homage to New York’s rich history while leaning into the future,” says Merinoff. “That’s how we always looked at it: how do we recognize the past, and also show that we’re here for the long haul.”