‘The Greatest Showman’ Costume Designer on the Film’s Fantastical Wardrobe 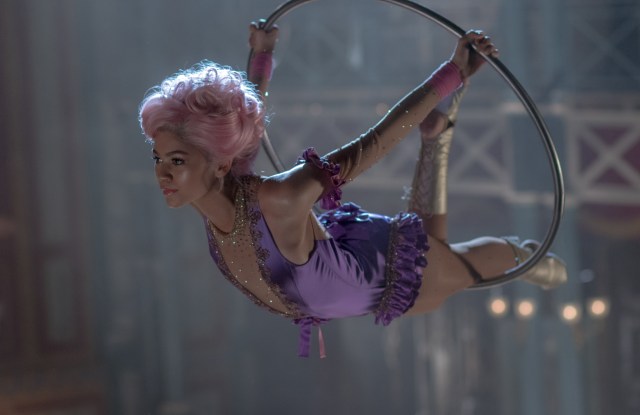 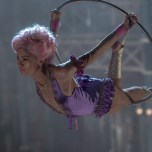 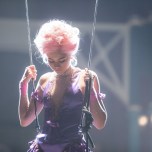 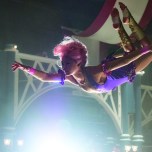 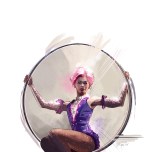 “I am really a crystal freak,” says Ellen Mirojnick. The award-winning costume designer lent her talents — and eye for sparkle — to the wardrobe for “The Greatest Showman,” the Michael Gracey film starring Hugh Jackman as P.T. Barnum.

With inspiration ranging from 19th-century costumes to John Galliano for Dior, Mirojnick created a wardrobe that exudes fantasy as much as it sparkles — she used a total of 60,000 Swarovski crystals throughout. WWD asked her about the design process, her crystal obsession and what it was like working with stars like Jackman, Michelle Williams (Charity Barnum), Zac Efron (Phillip Carlyle) and Zendaya (Anne Wheeler).

WWD: Where did you draw inspiration?
Ellen Mirojnick: We were interested in creating a film that had great imagination and a fantastical, classic and romantic idea that also was fashion-forward. I looked to many different things, whether it be authentic costumes from 1845 going all the way until the turn of the century to John Galliano for John Galliano and then for Dior. I looked to Las Vegas, I looked to glamorous and romantic jazz films of the 20th century. All of that became somewhat of a potpourri of different types of elements that I could use to create magic and fantasy.

WWD: How many pieces were custom vs. purchased?
E.M.: I would say 85 percent custom to 15 percent — I can’t say purchased because anything that we received that didn’t originate in our workroom we changed, reimagined.

WWD: How did you decide on the color palette?
E.M.: I learned early on that black was not an option because you don’t put that in a musical. Navy was OK, but black wasn’t. The color palette was not quite that. There were moderations of jewel tone and romantic colors and rich colors so that whether it be blues or pinks — we ran the spectrum of reds, blues, pinks, purples, greens — all of it felt in part a bit bespoke.

WWD: Why did you want to work with Swarovski?
E.M.: I love the light that they create. Anytime I can use crystal, I just lunge, truthfully. I am really a crystal freak. I love it because it sparkles, it creates light, it lifts everything — the mood, your face looks better, everything looks better with sparkles on it. Swarovski is so sophisticated in the way it’s cut and how it’s imagined together.

WWD: Zendaya’s look as an aerialist is one of the standouts from the trailer. What was it like designing that?
E.M.: It started with a pink wig. That was a good piece of fantasy and she’s an aerialist, she’s up at the top of the circus. The question became what’s the color and how many crystals can I use to make this pop? We found a gorgeous orchid-purple rip satin that was quite beautiful on her skin, and we took a fabulous Swarovski crystal that has an orange-y, purple-y, graphite color. We started with the pink wig, went to the crystals and found the orchid stretch satin and her accessories, meaning her gloves and the tights — all of that is accented with Swarovski crystal. And some fly boots, which were gold leather. She looked like a dreamboat.

WWD: How was it working with her?
E.M.: Zendaya is very skilled, hugely creative and has a very informed eye. She is a creative force. She’s the real deal, a hundred-percent package, but she was very relaxed in the process of creating her character and was open to making and becoming who she could ultimately be. Zendaya herself has a modernness about her, but she really does transcend all time.

WWD: How was working with Hugh Jackman as P.T. Barnum?
E.M.: Thrilling. The ringmaster is a special costume. That is the person that focuses the entire show. What was most important creating this was that you could feel the costume around his body, that it moved with his body. We found fabulous red lush silken wool that reflected the light. He dances throughout these shows, so it’s really important that you feel the light encircling his body, giving him the freedom to move.

WWD: What was his reaction when he tried the jacket on for the first time?
E.M.: This was an amazing moment. Hugh had an hour and it was a Saturday morning, very, very early in the morning. We were in the room, he came in and he started piece by piece to put the costume on. He was slow, methodical. Shirt, pants, boots and then the red coat went on. I have never seen a transformation and a bolt of electricity go through the air as strong as it did when Hugh put it on.

WWD: Any other memorable fitting experiences?
E.M.: Michelle [Williams] felt like a fairy princess every time she put something on, but she did look to me for an objective opinion so that she wouldn’t get lost in it. Zac Efron is a doll, handsome like nobody’s business and his instincts always prove to be right. He can walk into a fitting and know exactly what his body needs. The most important thing we had to do for Zac was create a design and build a pair of trousers that he looked like Baryshnikov in. He’s willing to try fashionable ideas and such, but he does know what works and what doesn’t work on him.

A sketch of Zendaya’s costume.