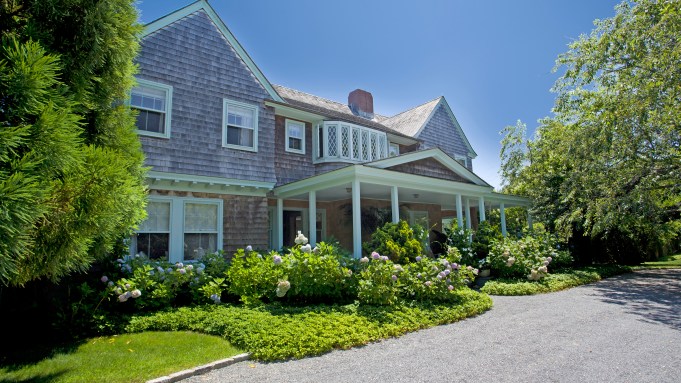 Grey Gardens, the formerly crumbling East Hampton, N.Y., retreat made famous by a film of the same name, is on the market with an asking price of $19.995 million.

In 1979, journalist Sally Quinn purchased the once derelict home for $220,000 cash from eccentric blueblood “Little” Edith Bouvier Beale, who had been living in the ramshackle estate alongside her mother, “Big” Edith Ewing Bouvier Beale until the elder’s death in 1977.

The duo — aunt and cousin to Jacqueline Kennedy and Lee Radziwill — was profiled in the haunting 1975 documentary, which was later adapted to an HBO film and Broadway musical.

“I had seen the documentary, but it was so much worse than anybody could have imagined,” Quinn explained of her first visit to the 1897 shingle-style home. “The floors were falling in and the back of the house was flapping in the wind. I had to take [Little Edie’s] word for it that there was a garden because the weeds and the vines were 12-feet high.”

“Once we bought the house [Little Edie] did this little pirouette and said, ‘All it needs is a coat of paint,’” she added.

Quinn, 75, said she is “completely turned on by ruins” and lovingly restored the crumbling property with late husband Ben Bradlee, longtime executive editor of the Washington Post, for around $600,000.

“[Edie] refused to sell it to all the other people who came to buy it,” Quinn continued. “I mean, the smell. There were 30 cats — you can’t imagine how horrible it was….I walked in and thought this is the most beautiful house I’ve ever seen and [Edie] said ‘it’s yours.’”

When the writer closed on the house, she gave Beale an ultimatum, which led to many of the home’s original furnishings remaining with 3 West End Road.

“The attic was full of beautiful pieces of French furniture, gorgeous wicker, [Louis] Vuitton trunks, brass lamps, desks,” Quinn said. “I said to her she could either leave it broom clean or she had to leave it all — she had no place to put anything and had no use for it so she just left everything.”

But if Grey Garden’s walls could talk, the stories they could tell. After bringing the house back to life, the D.C. power couple became known for hosting glittering parties with a wide array of Hollywood, New York and Washington luminaries. A standout moment of entertaining came when TV producer Norman Lear hired 24 violinists in white tie and tails to leap from the bushes and surprise Bradlee on the occasion of his birthday.

“Suddenly we’re standing out there in the moonlight and the starlight and all of these violinists are playing,” continued the Georgia native. “It was like the whole place just sort of levitated.”

Lauren Bacall, a perennial visitor to Grey Gardens in summers throughout the Eighties and Nineties, had a tradition of making a sultry toast to the famed newspaperman in her signature husky voice.

“It went something, like, ‘My eyes to your eyes, my lips to your lips. If I’m asleep, wake me; If I don’t want to, make me,’” Quinn said. “Everybody would swoon. Then one night we were having the birthday party and Paul McCartney showed up and brought a painting that he had done for Ben. Jack Nicholson was there and Lorne Michaels — it was just a wild evening.”

After Bradlee’s death at age 93 in 2014, the author found it increasingly difficult to visit the seven-bedroom home they once loved and she recently made the decision to put Grey Gardens on the market.

“Last summer I thought I’d go back to Long Island and see how it worked,” intimated Quinn. “It was really sad. The first week I just had a total meltdown — it’s just not the same as it was when we first bought the house and all of our friends were there.”

“I feel like I’m ready to move forward now,” she added.