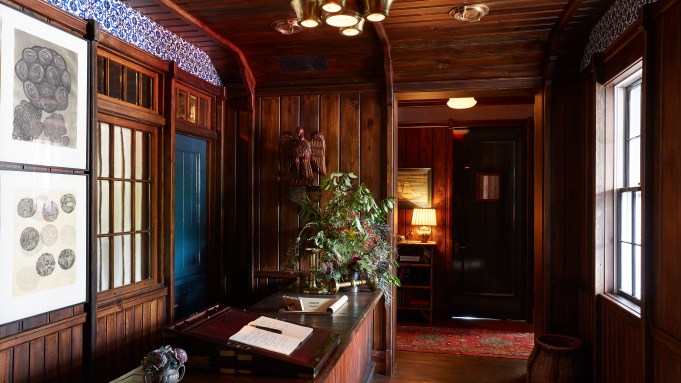 Nantucket, Mass., with its mandated shingled homes and ban on chain businesses, is not exactly a bastion of newness. But as of this weekend, the mold bends for Greydon House, a luxury boutique hotel opening in the center of town from first-time hoteliers Elliot Gould, Jeremy Leventhal and Alex Leventhal.

Greydon House occupies the corner of Broad and Federal Streets, and will open on Saturday after over a year of tug-of-war construction. “You’re very restricted in terms of how tall you can build, what you can build, what it has to look like,” Jeremy says of building on the island.

The Leventhal brothers grew up in the hospitality and real estate business: their grandfather Norman Leventhal built and operated the Boston Harbor Hotel and The Langham, and their father is the founder of real estate investment firm Beacon Capital Partners. “I grew up going out to the Cape and coming out to the islands, to Nantucket and Martha’s Vineyard,” Jeremy says. “So we had a special affinity for it.” Their maternal grandfather was Elliot Gant, the shirtmaker known for popularizing New England prep style; as a result, Gant has created the staff uniforms for Greydon.

The island, which averages a year-round population of 10,000 and swells to between 60,000 to 80,000 residents in the summer months, is relatively sparse when it comes to luxury lodging — perhaps surprising given the presidential and celebrity clientele it attracts. As Gould and the Leventhals found out, the islanders are quite resistant to change.

“People on Nantucket, not only do they not approve anything for new development, but they also don’t want change,” Jeremy says. “They’re very opposed, so they told us they vehemently opposed the project. They thought we were going to put a hostel, a flophouse — and it’s on a prominent corner, so everyone was opposed.” Another roadblock was their supposed status as outsiders; the locals were less than thrilled with the idea of their beloved island becoming the next Montauk, N.Y. “We got painted as New Yorkers — they thought we were New Yorkers trying to ruin their island,” Jeremy says. “And I was like ‘I’m from Boston, actually.’”

The exteriors had to be heavily monitored and approved, but when it came to inside they were free to create as they pleased. The interiors were designed by the firm of Roman and Williams, who are responsible for New York’s Ace Hotel and The Standard, as well as restaurants like Le Coucou, The Dutch, Lafayette, and Upland. “This is a small project for them,” Jeremy says. “They normally work on much bigger projects. We said ‘look, this is the biggest building built in the last 100 years in Nantucket, this is an amazing place.’”

The result is 20 unique rooms outfitted entirely in either antiques or custom-made furniture, complete with brass fixtures from Waterworks from a collection Roman and Williams personally designed. Bathrooms are lined with hand-painted Portuguese tiled murals, floors are antique pine, and every room is done in New England island shades of oatmeals, khakis and navy blues.

Greydon House also features The Restaurant and Bar at Greydon House, helmed by a Michelin-starred chef, which will stay open year-round and will provide 24-hour room service. Rooms also come equipped with a complimentary minibar, and guests will notice a cocktail cart making the rounds between rooms, and an ice cream cart parked outside when the weather permits. (Half the hotel rooms close in January.) Bookings are open now, and while the island is known for its festive Christmas celebrations, you might just have to wait until next summer for that ice cream.