Feast for the Eye: Farmshop, Not Your Average Grocery Store

Chef Jeff Cerciello built it as a 1,750-square-foot showcase for California’s food culture. 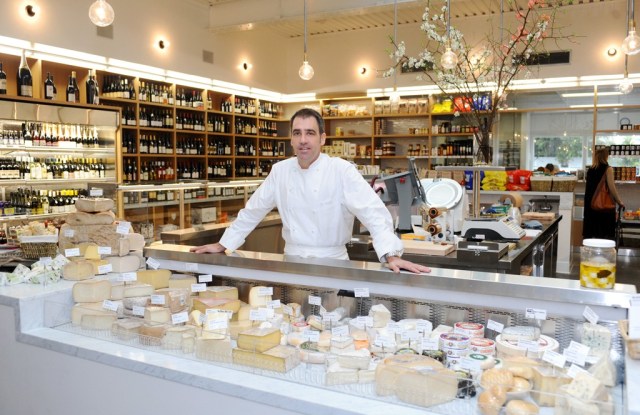 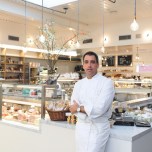 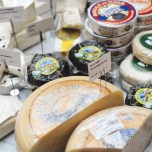 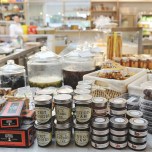 Farmshop isn’t your average grocery store. Housed in the Brentwood Country Mart, a quaint shopping enclave in Santa Monica, Calif., that serves as a regular hangout for celebrities such as Reese Witherspoon and Jennifer Garner, the airy store never carries any toothpaste or toilet paper. Instead, chef Jeff Cerciello built Farmshop as a 1,750-square-foot showcase for California’s food culture. Every item is selected with a curator’s eye, a story behind it and a strong relationship with the farmers and artisans.

Consider the heirloom flageolet beans from Steve Sando of Rancho Gordo in Napa: Sando’s son is in the same fifth-grade class as Cerciello’s daughter. The white tiles lining the high walls and the plates used in the adjoining 1,250-square-foot restaurant of the same name that Cerciello opened in 2010 are made by Sausalito-based Heath Ceramics. The popular Grace & I fruit and nut bars are hand-pressed on wooden cutting boards in Los Angeles.

“I wanted to focus on California,” says Cerciello, who was born in Torrance and grew up in Laguna Hills. Having lived in Napa Valley for nearly two decades, he commutes to Los Angeles by car, making pit stops at farms along the way. “It’s a great time to be in Los Angeles,” he says. “The food scene is just exploding.”

An alumnus of Spain’s elBulli, the mecca of molecular gastronomy, and a protégé of Thomas Keller at French Laundry, Bouchon and Ad Hoc, Cerciello could have worked the celebrity-chef angle, turning the store, which opened late last month, into a shrine for himself. Instead, he preferred to shine the spotlight on the vendors and the customers.

“We didn’t want this to be me, me, me,” he says. “It was really about what the community wanted and what was here in years past.”

In its 64-year history, the Brentwood Country Mart at one time or another offered a butcher shop, liquor store and deli that were frequented by the people who lived in the neighborhood. After an influx of fashion and beauty retailers, including James Perse, Unionmade and Space NK, the complex is going back to its rustic roots with Cerciello’s help.

To be sure, Farmshop isn’t all down-home country store. Director Judd Apatow and actress Leslie Mann have been spotted brunching with their family at the restaurant, while model Carolyn Murphy browsed the wine section on a rainy afternoon. Still, the ambience is casual enough for kids to plop down at the restaurant’s communal table for an after-school snack of cookies made by Farmshop’s bakery.

Cerciello’s success with Farmshop has already generated offers to expand the retail concept to Newport Beach. Alas, he said he isn’t ready, partly out of concern that the farmers and food artisans he works with wouldn’t be able to keep up with the demand.

“They’re too small,” he said. “They can’t produce enough.”

The vendors will get their turn in the spotlight through Farmshop’s new classes. Starting as early as March, the curriculum will be held Monday and Tuesday nights, when the restaurant doesn’t offer dinner service. Cerciello said the subjects could range from a panel with cheese producers from Northern California to a dinner and lecture by the owner of the influential San Francisco food store Bi-Rite Market.

“It really gives back to the community,” he says. “People want to find out more than ever where their food comes from.”

Instructions:
1. Pre-heat oven to 350 degrees. In a medium bowl, toss the turnips, za’atar and 4 tablespoons of olive oil together. Place onto a roasting tray in the oven and cook until tender, about 12 to 15 minutes. Set aside at room temperature.
2. Heat 2 tablespoons of olive oil in a medium saucepan over low heat. Add onion, garlic and chili flake to the oil, along with a pinch of salt. Cook slowly until onion and garlic turn translucent, about 3 to 4 minutes.
3. Add farro and toast for 2 to 3 minutes. Add water and bring to a low simmer. Simmer gently until tender, about 15 to 20 minutes. Remove from heat and let sit for 10 minutes. Drain in a colander.